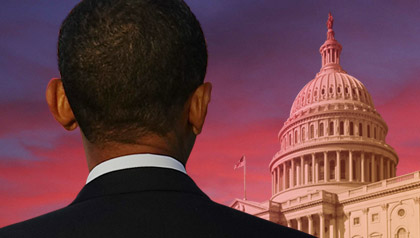 En español |Washington's new divided government faces the tall order of reining in spending while creating jobs. Republicans and Tea Party activists, on one side of the divide, and President Obama and his traumatized Democrats on the other now confront a fraught political environment. The next two years pose high-stakes choices. How will the politicians respond to voter demands? Will they work across party lines or will they hunker down for a bruising 2012 campaign?

The showdown will occur amid daunting challenges — a brutal economy with one of every 10 Americans out of work, soaring state and federal budget deficits, two expensive wars and an outpouring of budget-cutting proposals produced by three deficit commissions.

Many of the issues on the table are critical to older Americans — the deficit, jobs, taxes, health care, Medicare and Social Security. How those issues are addressed will be determined largely by leaders of two increasingly polarized parties.

The election moves John Boehner of Ohio into the House speaker's chair, where he will have to integrate into a caucus of traditional Republicans some 80 newcomers who ran promising to upend the political world — and fast. "It's pretty clear the American people want a smaller, less costly and more accountable government," said Boehner.

By any measure, Obama and his Democrats took what he called a "shellacking" on Election Day. Democrats have not suffered such a setback in more than 70 years. As the Tea Party pushes congressional Republicans to the right, the election wipeout of moderate Blue Dog Democrats will push congressional Democrats further to the left, complicating prospects for compromise or collaboration.

Yet that is the course Obama charted after the election. The American people want Washington to "mix and match ideas, figure out those areas where we can agree on, move forward on those, disagree without being disagreeable," he said.

The partisan environment makes that very complicated. "There's a meanness here now. They don't even talk to each other," said Stephen Hess, senior fellow at the Brookings Institution.

"There doesn't seem to be much support for the middle course," said John Rother, AARP executive vice president. Still, he said, he is optimistic Obama and the Republicans will want to reach across the aisle. Republicans have the responsibility of governing now that they have the House majority. "I think the public would have a negative reaction if it were just a consistent 'no' message," Rother said.

The deficit and jobs. Voters said their major concerns were the $1.3 trillion budget deficit (along with the cumulative $13.7 trillion national debt) and jobs. Deficit panels, including one created by the president, are offering lawmakers an array of options.

That's a tall order. "We have harpooned every whale in the ocean and some of the minnows," Simpson said. Reaction from politicians and special-interest groups, including AARP, was almost universally critical.

Eugene Steuerle, a fellow at the Urban Institute and former Treasury official, said both parties have for years spent more than the country takes in. But now voters are forcing the issue. Next year, he said, the government will spend about $30,000 per household and take in about $20,000 in taxes. "No matter what they do, it's going to be painful politically," Steuerle said. "The political dilemma is telling the middle class some of the things they've been promised in low taxes and high benefits cannot be sustained."

With unemployment at almost 10 percent, creating jobs is another priority. But if that means borrowing and spending money — the two voter mandates will be in conflict.

Social Security. Because of its size, its long-term financial challenges and a GOP plan to partially privatize it, Social Security is part of the budget debate. One plan offered by the president's commission proposed raising the retirement age to 68 by 2050 and to 69 by 2075 and gradually reducing benefits.

The probable new chairman of the House Budget Committee, Wisconsin Republican Paul Ryan, will be a leading voice for change. He favors private accounts for Social Security, which AARP opposes. According to association Executive Vice President Nancy LeaMond, "Americans, particularly the middle class, are facing declining pensions, lack of savings and rising health care costs, and these unbalanced proposals take the country in the wrong direction instead of answering their real fears."

The issue will no doubt be a central focus. "We'll be under the gun much more than we have been," said Barbara B. Kennelly, president of the National Committee to Preserve Social Security and Medicare.

Health care. Republicans have targeted "Obamacare," the health care reform that will provide health insurance for more than 30 million people now uninsured by putting new requirements on businesses, insurance companies and individuals. Many of the newly elected Republicans who have vowed to repeal the law will try to curtail funds needed to implement it.

Republicans will have difficulty finding the votes to override a presidential veto. But they could try to slow down funding for health care reform or pick off small provisions, said James Thurber, director of the Center for Presidential and Congressional Studies at American University.

Boehner also dispatched a letter to newly elected Republican governors pledging to work with them to slow down implementation of the machinery necessary for the national plan.

Taxes. Bush-era tax cuts, as well as cuts enacted with the 2009 stimulus plan, expire at year's end. Obama has announced a tentative deal with Republicans in Congress to extend the Bush tax cuts at all income levels for two years. The package would also preserve benefits for the long-term unemployed and cut payroll taxes for employees for a year.

Now what? The public seems to see divided government as a good thing, said Republican pollster Bill McInturff of Public Opinion Strategies. If fellow Republicans are smart, he said, they will find a few moderate Democrats to work with so they can tell voters they are working across the aisle. And if Republicans do what they promised in the election, such as cutting spending, it could help the GOP brand in the 2012 election, McInturff added.

For their part, Democrats still have a majority in the Senate, though the November results may be intimidating for the 23 Democratic senators facing reelection in 2012. And Obama is still president — with the tools, prestige and power that entails.

"The Democrats are not going to roll over and play dead," said David Gergen, of the Center for Public Leadership at the Harvard Kennedy School. But, added Stephen Hess, "if they're not willing to do business with each other, all of this is just a prologue to 2012. It's the degree of gridlock the American people are going to have to deal with."

Tamara Lytle is a former Washington bureau chief for the Orlando Sentinel.