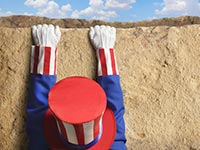 Will Washington allow the nation to fall off the fiscal cliff? Hang on and see what happens.

En Español| Now that the elections are over, all the buzz inside the Beltway is about the looming "fiscal cliff."

AARP: No cuts to Medicare, Social Security in budget deal

As you scan the headlines or watch the news, you may be wondering what exactly the term means. And when you start to pay closer attention, you're likely to encounter even more Washington lingo that tempts you to turn off CNN and tune into QVC.

Put down that remote! This is important stuff that you really need to focus on. As Congress wrangles over balancing the federal budget, the big questions include whether (and how) to raise taxes and what spending cuts to make.

Learn what's at stake for the future of Medicare and Social Security.

Potentially on the chopping block are Medicare, Social Security and veterans' benefits, plus just about every other federal program. To help you make heads or tails of it all, we've prepared a cheat sheet of terms you're likely to hear:

OK, the image is a little hyperbolic, but here's what's about to happen: Lawmakers and the president will once again try to deal with the worrisome fact that our nation spends more money than it takes in. If they don't reach an agreement, major tax increases kick in on Jan. 1. Major federal spending cuts are scheduled to take effect on Jan. 2.

(The reason? You may recall that last year Congress couldn't agree on a deal, so it did what it always does in such circumstances: It put off deciding, but did agree on a day-of-reckoning deadline to force a compromise down the road. That's where we are now.)

Pretty much everyone in Washington agrees that something needs to be done to keep our economy healthy, but just what? That's the $500 billion question.

* Depending on which wonk you listen to, you may also hear this referred to as the fiscal slope, the fiscal crisis or even the austerity bomb.

In 2001 and again in 2003, then-President George W. Bush successfully pushed to cut taxes for all Americans.

Because of the way the tax-cut deal was worked out, the cuts were to expire at the end of 2010. But for a variety of reasons, they were extended for another two years — which brings us to today.

The issue now: Should those cuts be extended again? For everyone? For just wealthy or middle-income Americans? No general consensus yet on any of this.

Or, if you're really in the know, the AMT. Think of this as a kind of parallel tax system designed to make sure everyone — particularly rich people — pays his or her share of income tax.

Under the regular tax code, you're allowed all sorts of exemptions, deductions, credits and other adjustments, sometimes known as "loopholes."

Under the alternative tax code, not so much. You compare what you would pay under the regular code and the AMT and then pay the higher of the two, which means revenue for Uncle Sam.

Basically, this is an annual game of chicken played by Capitol Hill lawmakers. Over the past decade, fees for doctors have faced major cuts because of an intricate formula that sets limits on how much Medicare can spend.

But every time these cuts were imminent, doctors complained and lawmakers then suspended them in an annual ritual nicknamed the doc fix. Most agree that a permanent solution would be better, but that's pretty much where the agreement ends.

A crucial question: how much to spend on Medicare, which accounts for nearly 13 percent of the federal budget.

Continuing Resolution, Sequestration, Unfunded Mandate. Use the AARP National Debt Glossery to understand what it all means.

The acronym is easy: It stands for consumer price index, a formula that looks at how the prices of stuff we need (food, for example) change over time. It's used to make cost-of-living adjustments in programs like Social Security, Medicare and food stamps.

The chained CPI is a twist on that: It measures living costs differently because it assumes that when prices for one thing go up, people sometimes settle for cheaper substitutes (if beef prices go up, for example, they'll buy more chicken and less beef).

Bottom line: Cost-of-living adjustments would be lower with the chained CPI than with the plain old CPI. So depending on which formula is used, the amount of your Social Security or Medicare payments could change, perhaps significantly.

Essentially, this refers to a payroll tax cut that we all got in 2009 when our share of Social Security taxes was reduced from 6.2 percent to 4.2 percent. The idea was — ka-ching — to put money in people's pockets so they'd have more to spend, thus giving the economy a much-needed boost.

The problem is that the deal required the government to pony up the lost contributions to the Social Security fund. It's a shell game, pure — well, not so pure — and simple.

With Congress' approval, the federal government can borrow money to pay for programs that Americans want. But there's a limit on how much Uncle Sam can borrow, and this is known as the debt ceiling.

As the national debt has grown, we've repeatedly bumped up against this limit — and raised it. (Remember that habit of putting off difficult decisions?)

We are now about to reach our limit again — and if we don't raise it (or cut the amount of money we spend), we may be — uh-oh — headed over the fiscal cliff.