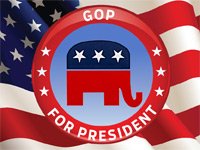 As the founder of the congressional Tea Party Caucus, Michele Bachmann set herself up early as a leader of the small-government, low-tax, debt-busting camp in Washington. And like her compatriots, Bachmann is strongly in favor of entitlement reform, which she says is critical to balancing the budget and reducing the national debt. A win in the Iowa straw poll in August gave her an early boost, but Bachmann has since struggled against other conservative candidates in the field.

Bachmann has not offered a detailed plan for Social Security, Medicare and Medicaid. However, she has embraced broad reforms to the programs. In a speech in Iowa, Bachmann called for raising the eligibility age for Social Security. She also voted for a budget plan offered by Rep. Paul Ryan, R-Wis., that would turn Medicaid into a block grant program to states and change Medicare so that future retirees (starting with those now age 50) would receive a government voucher to buy their own insurance. In May, Bachmann told Fox News that she had some misgivings about the Ryan plan, saying she was "concerned about … shifting the cost burden to senior citizens." During a Des Moines radio show interview, Bachmann blasted the "Great Society" social welfare and health programs, calling them a "multi-trillion-dollar experiment and failure." "That's part of what I want to repeal is the failed trillions and trillions of dollars in the welfare state that aren't doing our country any good," Bachmann added. In her new book, Core of Conviction, Bachmann recalls her young-adult shock at seeing how much of her check went for Social Security withholding. She said she wrote a letter saying she preferred to forego withholding and pay for her own retirement, but was informed that was illegal.

Bachmann has voted against increased funding for Amtrak and opposed a measure to provide light-rail monies to states, praising governors who refused the federal help. As a state senator, Bachmann backed a "personal transit system" to transport two to six passengers at a time to their destination, without stopping and on an elevated track.

Bachmann has a consistent record favoring lower taxes and reduced regulation. She is the author of legislation to repeal the health care law President Obama signed in 2010, as well as legislation to undo the Dodd-Frank financial reform law. She opposed raising the debt ceiling, saying it would give the White House a "free pass" to spend. She also has introduced sweeping tax legislation to kill the estate tax and the gift tax, reduce the corporate tax rate to 25 percent or lower, and ban increases in the maximum tax rate for capital gains and dividends earned by individuals.