En Español |Virginia is a socially conservative land, the tobacco-growing, genteel icon of the Old South, where tradition trumps newfangled ideas peddled in the suspect U.S. capital that lies on the Old Dominion's northern border.

No, wait — Virginia is largely a suburb of the heavily Democratic District of Columbia, full of unionized federal workers and professional women who see themselves not as belles, but as board members of corporations.

Actually, Virginia is both. And the two sides of the commonwealth are richly displayed in the opinions of Virginia's older voters, who stand to play a pivotal role in one of the most hotly contested battlegrounds of the 2012 election. 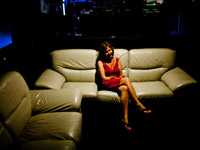 With its relatively low unemployment rate, Virginia has the luxury of paying attention to social issues in this year's campaign, said University of Virginia political scientist Larry Sabato.

Earlier this year Republican Gov. Bob McDonnell spotlighted the issues by signing a law requiring that women get a sonogram before they obtain an abortion, a move that pleased part of Virginia but annoyed those who saw it as a shift backward, not forward, on social policy. And with more than a third of the voters in the last presidential election over 50, their reaction to such social issues could influence the results of the November election.

At the annual fish-eating-and-flesh-pressing fest called Shad Planking, in the southeastern town of Wakefield, many 50-plus voters were very clear about how they see politics and culture. Wearing T-shirts that said "Tell Obama to Keep the Change," they made it obvious that they don't like abortion or gay marriage, and they're hoping for a Republican president and a more conservative Supreme Court.

Abortion was the central issue for retired civil servant Jim Keiper, 60, of Chesapeake, as he surveyed the political and culinary scene at the Shad Planking, an old Virginia tradition that features speeches by politicians and a feast of the oily, bony fish roasted on wooden planks.

Next: The political viewpoint from Northen Virginia. »

Known for: Changing its political personality from reliably Republican. Demographic changes made Obama the first Democrat to win the state since Lyndon B. Johnson.

Campaign strategy: Win the culture wars. Obama will try energizing professional women and government workers in Northern Virginia. Romney will appeal to the social conservatives in the south.

Mary Howald, a 56-year-old homemaker with seven children, said women should have access to contraception — but when a child is on the way, the situation changes. "A woman should have the right to have sex, and she has the right to get pregnant," said Howald, who is from Ivor. "But once you get pregnant, you have a responsibility to someone else."

In the other country — Northern Virginia — over-50 voters see things quite differently.

Celebrating another Southern tradition, shag dancing, older voters shook their heads at what they saw as a retrenchment of matters they thought were settled law and social policy. Sipping beer and grabbing fellow locals' hands for the old-fashioned dance, the mainly older crowd on the cozy basement dance floor at Icons in Fairfax said they weren't happy with the conservative turn in the state legislature. (After the midterm elections in 2010, the GOP took control of the state Senate and expanded its control of the House of Delegates.)

"I'm concerned about a lot of women's issues. I think we're going backwards on individual choice," said Oakton resident Beverly Larson, 64, a contractor for the Department of Defense.

"They shouldn't do that — no sonograms," said Sandra Traylor, 67, of Fairfax, a retired Defense Department employee, referring to the new law. "I lived through this in the '60s," she added, saying she hadn't expected to have a legislative battle over it again.

At both uniquely Southern fetes, voters voiced a concern for nuts-and-bolts economic issues and railed against what they saw as a dysfunctional Congress. But with the attention to Virginia's abortion laws and conservative governor and legislature, such social issues will highlight Virginia's cultural divide and make the state a complicated place for the presidential candidates, Sabato said. "Virginia used to be a Southern state. Now, it's a Mid-Atlantic state," he explained, largely because of demographic upheaval in increasingly Democratic Northern Virginia.

It's anyone's guess how it will all play out. "Virginia, unlike a lot of other states, is prosperous," Sabato said. "When you've got [a lower] unemployment rate, it's natural [for voters and politicians] to focus on other issues — because they can."