En Español |Live Free or Die. That has been the proud motto of New Hampshire since 1945.

Even though the state has undergone demographic and political shifts, Granite Staters still live up to their slogan. They don't like big government. They don't like taxes. And really, why can't everyone just leave them alone to live as they see fit?

Are new residents in the Granite State shifting the political landscape? — Photo by Daryl Peveto/LUCEO 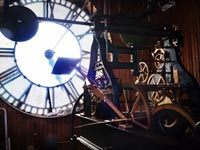 For older voters, the question is not simple. Many are worried about the national debt and deficit, and they want elected officials to exercise more fiscal restraint.

Yet there is a responsibility, too, to the health and safety of the country, they say, and government needs to ensure that basic needs for people are met. And since the state's paltry four electoral votes could be crucial in a close election, the question of how much government is too much may be a serious one for the presidential candidates.

"Government's out of control. And I'm not sure if it's President Obama's fault, but he hasn't fixed it," said Bradford E. Cook, 64, an attorney in Manchester. "What worries me is what we're leaving our children — not what we can do for old people. If anybody had any guts, they wouldn't be guaranteeing me Social Security." Instead, a means test should be set for retirees to reduce spending on programs, Cook said.

Mary Remensnyder, 80, would also like to see people develop a sense of responsibility. That means an obligation to the community at large, the retired teacher said. "Maybe the Founding Fathers never intended for it to be settled, [but] I don't think we can agree on what the role of government is," said Remensnyder, who lives in an upscale retirement community in Exeter.

"The people don't trust the government," said police officer Alan Patterson, 46, of Lebanon. "There's no accountability. There has to be trust. You have to listen to your constituents.''

Next: Are new residents changing the political landscape? »

Campaign strategy: Winning over independent voters. Some are disillusioned with Obama. Others find it hard to connect with Romney.

GOP candidate Mitt Romney has made small government a central theme of his campaign, promising a repeal of the health care law and a rollback of government regulations. President Obama has pledged to eliminate unnecessary regulation but insists that rules and laws — such as the health insurance mandate, banking regulation and greenhouse gas emission limits — are necessary.

Some older voters, too, are reevaluating their views of government.

Dave Knox, a 74-year-old retired teacher in Wolfeboro, never had much use for the teachers union. But now he's alarmed at what he sees as attacks on public sector workers to save tax money. And Cook, who describes himself as a "Barry Goldwater/libertarian-type guy," thinks citizens should pay up to support public activities. If the Bush-era tax cuts are allowed to expire, "my taxes [will] be higher, and I'll scream like hell, just like every other red-blooded American," Cook said. But "the Republicans can't say anymore you can't have any tax increases" — a sign, perhaps, that the state's set-in-granite image as antitax and pro-limited government is beginning to crack.