En español | A bipartisan deficit-cutting plan known as the "Gang of Six" proposal would trim future Social Security checks, end a new program for long-term care insurance and shake half a trillion dollars out of the Medicare and Medicaid systems. 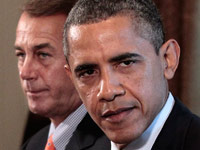 As Congress and the White House race against the clock to agree on how to tackle the deficit and raise the ceiling on the national debt before Aug. 2, the Gang of Six plan has gathered support from both parties, something many other proposals have failed to do.

The plan, which is the work of three Republican and three Democratic senators, is so sweeping and complicated that almost everyone agrees it can't be passed before the nation runs out of borrowing authority on Aug. 2. But it has created momentum for a large deal to address the country's long-term debt problems. And it has laid out ideas that might be part of whatever solution Congress finds after weeks of high-stakes negotiating.

That doesn't mean all those ideas are easy or popular.

The plan, which is strikingly similar to one proposed by President Obama's fiscal commission, would save $3.7 trillion or more over the next 10 years, depending on how you measure current spending. The first wave of the plan would cut $500 billion in red ink.

Part of that money comes from changing the way cost-of-living adjustments are figured for Social Security and other programs. David Certner, AARP legislative policy director, says the COLA would rise less quickly than under the current law, and each year that difference would be larger. "It's important for people as they grow older — the COLA is falling farther and farther behind," he says.

And Social Security could be subject to more changes in the second round of cuts under the Gang of Six plan. Those cuts, along with tax law changes, would be set by congressional committee. The Senate "gang," led by Republican Saxby Chambliss of Georgia and Democrat Mark Warner of Virginia, would lower overall income and corporate tax rates in exchange for reducing various tax breaks, like those for home mortgage interest, retirement accounts and charitable donations. But the details would be decided later.

"We refer to it around here as the 'promises, promises' bill," says Alison Fraser, head of the Heritage Foundation Thomas A. Roe Institute of Economic Policy Studies. "The problem I have with the Gang of Six plan is you don't really know what's in it."

But advocates for seniors say they have seen enough to be worried.

Next: Taxes are a key point in debt plan. >>

The plan targets for extinction a new program that allows workers to buy long-term care insurance. That program, called the CLASS Act, is part of Obama's health care overhaul. Critics say it will not take in enough in premiums to pay for itself. Fraser called it "Ponzi scheme financing."

Certner says the long-term care insurance program is needed because one in four people is caring for a relative and $450 billion worth of care is unpaid. "We don't want to see it eliminated before it even gets off the ground."

On Medicare and Medicaid, the Gang of Six would ask congressional committees to cut about $500 billion in spending. That's in addition to a similar size reduction mandated by the health reform law. "To achieve that level would be extremely difficult without massive cost shifting or reducing access" to medical care, Certner says.

But Fraser says the Gang of Six approach doesn't move fast enough to stem the growing costs of Medicare and Medicaid.

"They're unaffordable. If we don't start reforming them today, the solutions are going to be very, very harsh," Fraser says.

Along with cuts to health programs, defense spending and other federal programs would be reduced, with caps established. Congressional committees would be left to decide on what programs are eliminated or reduced.

Fraser says she's worried there won't be enough cuts and that the bill will lead to higher taxes and raising the debt ceiling without getting long-term government spending under control. Wall Street financial markets, she says, have made it clear that the nation needs to get its debt load down as a percentage of the economy.

The plan is notable for drawing some Republican support even though it solves part of the debt problem by raising tax revenues, not just cutting spending. Rep. Frank Wolf, R-Va., for instance, urged House leaders to bring it to a vote. He called it "bitter medicine" that could "restore our fiscal health." And even House Majority Leader Eric Cantor, R-Va., said that although he doesn't favor tax hikes, the Gang of Six plan "does seem to include some constructive ideas to deal with our debt."

But a large bloc of House Republicans has vowed not to support anything that includes higher taxes. The issue has became a flash point.

"Should the Gang of Six plan pass, those fake 'conservatives' who supported it will walk the plank. That's a promise," said Brent Bozell, a conservative activist.

Next: What happens if debt ceiling isn't raised? >>

Obama has continued to meet with House Republican leaders to find a solution that would allow an increase in the debt ceiling. Without it, the country will not be able to pay all its bills beginning Aug. 3 and could default on its debt for the first time in history.

Pete Peterson, head of a foundation in his name that pushes for deficit solutions, praised the Gang of Six approach for balancing spending cuts with revenue increases.

"These six senators have done what we need all of our elected leaders to do: come together on a comprehensive bipartisan plan that addresses America's long-term deficits in a big way," Peterson said.

In addition to Chambliss and Warner, the group includes Republicans Tom Coburn of Oklahoma and Michael Crapo of Idaho, and Democrats Dick Durbin of Illinois and Kent Conrad of North Dakota.

Even if the Gang of Six proposal loses ground for political or logistical reasons, parts of it may survive.

"It's virtually impossible to do this overarching change before the Aug. 2 deadline, but these ideas are clearly in the mix long-term," Certner says.