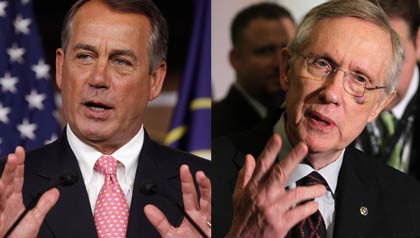 Forced to choose a budget blueprint for next year, the Senate has voted for none of the above.

"I can't see Republicans and Democrats agreeing on a budget after this exercise," says Brian Darling, a Senate expert at the Heritage Foundation, a conservative-leaning think tank.

That means that despite a projected $1.4 trillion budget deficit, spending won't be reined in, even with a public clamor for the nation to get its red ink under control. The budget plan is a blueprint that sets limits for federal spending.

The plan that Republican leaders have pushed and that the House has passed would cut costs in Medicare by giving seniors a set amount of aid to buy insurance from the private market. It would affect only those who are 54 and younger.

Republicans, including the idea's sponsor, Rep. Paul Ryan of Wisconsin, have said it's crucial for saving the program, which is out of financial balance in the long term. Democrats charge that it would end the Medicare program. They have made headway in public opinion polls with a targeted campaign against the Ryan proposal.

"The Republicans are willing to take on entitlement reform," Darling says of the Senate vote. Five Republicans voted against the rest of the party on the measure, though Sen. Rand Paul of Kentucky did so not because of opposition to the Medicare changes but because he wanted more aggressive budget cutting.

"Republicans are right to stress Medicare is the big enchilada when it comes to an unstable fiscal future," says Isabel Sawhill, a budget expert at the Brookings Institution, a liberal-leaning think tank. "But they are wrong to say the public is ready to embrace radical change."

The votes were cast in the shadow of a special election in upstate New York where Democrat Kathy Hochul won a House seat this week after excoriating the GOP Medicare overhaul proposal. That vote "is handwriting on the wall: Republicans beware of targeting Medicare for major changes," Sawhill says.

Next: Will the Medicare overhaul pass this year? >>

Darling says Medicare was an issue in that campaign, but "you can't look at that race and call it a referendum on Medicare." Hochul won in three-way contest with 48 percent of the vote against a Republican and Tea Party activist.

In that race, Medicare was the top issue for 21 percent of those planning to vote, according to the Siena College poll taken last weekend. That sentiment was reflected in Hochul's winning margin. In a poll taken the final weekend of the campaign, Republican Jane Corwin trailed Hochul among those 55 and older by an eight-point margin, 45 percent to 37 percent.

Darling concedes that Republicans have done a lousy job of telling voters why it's crucial to reform Medicare and other entitlement programs because of growing costs.

Medicare overhaul is unlikely to pass this year, according to experts such as Darling and Sawhill, but will be a hot topic in next year's congressional and presidential elections. So far, Republican presidential candidates have been reluctant to embrace the controversial Ryan plan. But when Newt Gingrich spoke harshly of the proposal recently, conservatives lashed out at him, and he ultimately said his remarks had been misunderstood and apologized to Ryan.

Ryan's plan was one of four that failed in a series of Senate votes. Democrats didn't offer a plan, deferring instead to bipartisan talks that are being led by Vice President Joe Biden. Obama's original budget proposal was put up for a vote but failed unanimously. Obama himself backed away from it this spring by offering another that cut the deficit more.

An ad-hoc group of three Republicans and three Democrats who hoped to come up with a plan for reducing the deficit lost one Republican member recently. That development, combined with the budget failure, means Biden's talks are the "only game in town" for crafting a fiscal deal, Sawhill says. But the Biden talks are likely to produce only small-scale changes as an August deadline looms for raising the federal debt ceiling, and financial markets signal they want action, she says.

"I'm afraid it will be left to the next election," Sawhill says. "The big question is, can we afford to do that? How much longer will our creditors be willing to lend at low interest rates?"