The results are in. See what Americans 50+ have to say about the chained CPI, Social Security and the national debt.

Infographic: 50+ Voters and the Chained CPI

Speak up about the future of Social Security

The finding, included in results from a nationwide survey of registered voters age 50 and older, conducted for AARP on March 19 and 20 by Woelfel Research Inc., comes as President Obama prepares to release a budget proposal that reportedly includes just such a change, a twist on the consumer price index called the chained CPI.

The chained CPI would reduce the expected benefit increase each year, and reductions would grow larger over time.

Older voters, the poll found, are nearly unanimous in their belief that Social Security benefits should not be reduced for today's seniors, with 87 percent saying the issue is "very important" to them.

Similarly lopsided margins of older voters believe that Social Security should be "off the table" in the current budget debate. In particular, 84 percent said that they oppose reducing Social Security benefits as a means of reducing the federal budget deficit. The same percentage of older voters said that the future of the retirement security program should be considered separately, and as the graph below shows, political affiliation made barely any difference.

(Place your cursor over the colored pillars in each graph to see the detailed results.)

In addition, 52 percent of those surveyed said they oppose using a chained CPI to adjust the tax code for inflation and 34 percent said they support that idea (13 percent said they didn't know and 1 percent declined to answer). The voters surveyed, who were split almost equally among Democrats, Republicans and independents, also sounded a strong note for Capitol Hill lawmakers who might support a switch to the chained CPI. Two-thirds (66 percent) said they would have less favorable feelings toward their representative in Congress for voting that way. 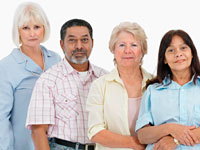 According to a new AARP survey, the vast majority of adults 50 and older are concerned about using the chained CPI to calculate Social Security and other benefits.