In one of the most technologically advanced nations in the world, how is it possible that an election can come down to “butterfly ballots” and “hanging chads”?

See also: Older voters could decide the next American president.

The 2000 battle between George W. Bush and Al Gore will be remembered as one of the most disputed elections in U.S. history. Not until a drawn-out recount and an unprecedented decision by the U.S. Supreme Court was the outcome decided. Politicians and voters alike blamed confusing ballots and antiquated technology as the driving force behind all the uncertainty. 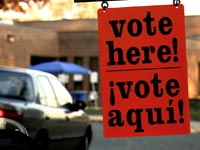 New technology is changing the way we vote at the polls

For those interested in revisiting the drama, an exhibit at the Newseum in Washington, D.C., titled “Every Four Years: Presidential Campaigns and the Press,” displays the voting booth, ballots and hanging chads from the 2000 Florida recount.

To assess how far voting technology has progressed and how the 2000 calamity drove its development, we turned to Doug Chapin, director of the Program for Excellence in Election Administration and a self-described “election geek”; Jack Young, lead lawyer for Vice President Gore during the Florida recount; and Jason Torchinsky, an attorney for the Republican National Committee during the 2000 election.

You may also like: Politics and the election 2012 blog.