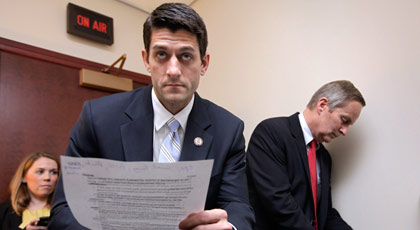 Democrats, who have a majority in the Senate, hope to present their plan later in April. Meanwhile, in a speech April 13, President Obama unveiled his own vision for reducing the federal deficit, which also touched on changes to Medicare and Medicaid.

Advocates for seniors have protested the Ryan plan, saying the changes would leave older Americans with less health care coverage and access to nursing homes, and would expose them to potential future cuts to Social Security benefits.

"The American people understand we can't continue spending money we don't have, especially when doing so is making it harder to create jobs and get our economy back on track," Boehner said.

But Democrats and organizations that represent older Americans voiced a different view of the Ryan proposal. "For somebody in their early 50s, I'd say hold on to your wallet — it's going to mean higher costs and lower benefits," said John Rother, AARP executive vice president for policy.

President Obama portrayed the sharp differences between his and Ryan’s budget plans as “very sharply contrasting visions in terms of where we should move the country. That’s a legitimate debate to have,” he told reporters April 5 after meeting with congressional leaders. “Part of the reason that debate is going to be important is because that’s where 88 percent of the budget is.  What we’re spending weeks and weeks and weeks arguing about is actually only 12 percent of the budget, and is not going to significantly dent the deficit or the debt."

Later, White House press secretary Jay Carney added, “Any plan to reduce our deficit must reflect the American values of fairness and shared sacrifice.  Congressman Ryan’s plan fails this test. It cuts taxes for millionaires and special interests while placing a greater burden on seniors who depend on Medicare or live in nursing homes, families struggling with a child who has serious disabilities, workers who have lost their health care coverage, and students and their families who rely on Pell grants.  The president believes there is a more balanced way to put America on a path to prosperity.”

But Ryan, in a YouTube message, said health, retirement and interest on the debt will consume every cent of tax dollars by 2025. "If we don't reform spending on government health care and retirement programs, we have zero hope of getting our spending — and as a result our debt crisis — under control," Ryan said.

The Ryan plan puts the government on a path to spend about $40 trillion over the next decade, $6.2 trillion less than the spending plan proposed by Obama in February. It reduces tax rates for businesses and individuals to boost the economy. And it would repeal Obama's health care reform law, which has proved unpopular with conservatives who say it is too expensive and involves too much big government.

Repealing the health care reform law would eliminate help with drug costs for seniors that would close the "doughnut hole" gap in Medicare prescription drug coverage, Rother says. It also could allow insurers to return to a policy of not giving coverage to people with preexisting conditions.

Next: How would Ryan's plan change the Medicaid program? >>

The Ryan plan also would fundamentally change the Medicaid program, which pays for nursing home coverage for many seniors. Instead of offering an entitlement to nursing coverage for those who qualify financially, the federal government would give states a lump sum to run the Medicaid program and decide who is eligible. That would protect the federal government from risk as health costs rise. But Rother says the federal block grant wouldn't keep up with costs, so many states would end up cutting back on Medicaid benefits.

Edward Coyle, head of the Alliance for Retired Americans, said he didn't want to leave long-term care decisions to states that have been cutting their budgets.

While Americans 55 and older would stay in the traditional Medicare program, young people eventually would instead get help buying health insurance coverage through private insurers. Rother said the federal support likely wouldn't keep up with rising health care costs, so many seniors would end up only with enough aid to join HMOs or buy high-deductible plans that pay only for the more catastrophic illnesses.

"It shifts the risks of cost growth off the federal government and onto household budgets," Rother said.

Max Richtman, executive vice president of the National Committee to Preserve Social Security and Medicare, said the vouchers save the government money precisely because they don't keep up with health costs. The plan "will send this nation back to a time before Medicare was enacted, when over one-half of the senior population had no health care coverage at all," Richtman said.

Next: Will there be changes to Social Security? >>

The budget hawk group Concord Coalition hailed Ryan's plan to shave $1.6 trillion from projected deficits. But more needs to be done to rein in Medicare costs, the group said in a statement.

"While setting spending targets for federal health care programs provides an incentive for efficiency, and increasing out-of-pocket costs for retirees provides an incentive for economizing, we will still need cost controls, delivery system reforms, and research on best practices to have any chance of reaching those targets," said Concord Coalition Policy Director Josh Gordon in the statement.

Democrats lambasted the Ryan proposal to turn Medicare into a voucher program for those under 55. Republicans "don't believe that senior citizens and people with disabilities have a right to guaranteed health benefits. Instead, they will turn the health of seniors and people with disabilities over to private insurers. Say goodbye to secure health care when you need it most," said Rep. Pete Stark of California, the top Democrat on the Ways and Means health panel.

Ryan's plan makes no immediate changes to Social Security but sets up an auto-pilot plan to force Congress to deal with Social Security's long-term financial problems. If Congress does not address the issue, benefits would be cut across the board.

Ryan's plan is likely to gain widespread support among House Republicans. But even if it passes the House, it likely will fail in the Democratic-run Senate and would be vetoed by Obama, AARP's Rother says.

"This proposal is not going anywhere anytime soon," Rother says. But if Republicans win control of the Senate and the White House next year, "that's a whole different story."

Tamara Lytle is a freelance writer and has covered politics and government in Washington for more than 20 years.