A key feature of the Affordable Care Act — or Obamacare, as it has come to be known — is the expansion of Medicaid to millions of low-income Americans, many of them uninsured, beginning next year. This has been one of the most controversial parts of the new health care law, and some states are still deciding whether to take part in the expansion.

Sign up to read stories of real people making a difference 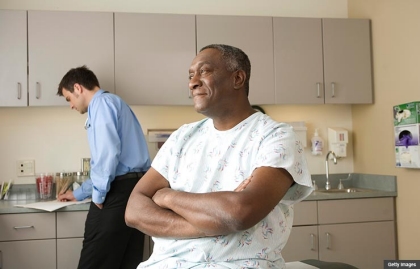 We've got answers to these frequently asked questions.

What is Medicaid?
Medicaid is a health insurance program for certain groups of low-income Americans: children and their parents, pregnant women, people 65 or older and people with disabilities. The federal government and each state share the cost of covering more than 60 million Americans — about a fifth of the population.

What is Medicaid expansion?
Beginning in 2014, the health care law could bring up to 20 million additional people into the program, including many who have never had health insurance.

Who are these 20 million people?
Most of them are low-income adults. Until now, low-income adults who aren't disabled and who don't have dependent children have been excluded from Medicaid unless the states in which they live have gotten special permission from the federal government to cover them. Seventeen states currently limit Medicaid coverage to parents with extremely low incomes. Only eight states provide full Medicaid coverage to other low-income adults. Under the new health care law, the federal government will give a state more money if it covers everyone who's not on Medicare and who has an income below 138 percent of the federal poverty level. In 2013, that's $15,856 for an individual or $26,951 for a family of three.

How many older adults could gain access to Medicaid as a result of this expansion?
About 4 million uninsured adults ages 46 to 64, including about 1.5 million who are working, according to the AARP Public Policy Institute.

Do people on Medicaid pay insurance premiums or other out-of-pocket expenses?
Some do, yes. States are allowed to charge some people premiums. They may also allow providers to collect copayments, deductibles and the like.

How can I find out if I'll qualify for Medicaid?
Check with the agency in your state that administers the Medicaid program. (Follow this link to find your state's Medicaid website.) Some states have already expanded their Medicaid programs. If you live in California, Connecticut, Colorado, Minnesota, New Jersey, Washington or the District of Columbia, you may already be eligible for Medicaid even if you were not before.

Can states refuse to expand Medicaid?
Yes. But the health care law aims to level the Medicaid field nationwide with a powerful incentive: money from Uncle Sam. The federal government will pick up 100 percent of the extra costs a state incurs to expand its program. That will begin phasing down in 2017 and level off at 90 percent in 2020.

Next page: Didn't the Supreme Court weigh in on the Medicaid expansion? »

Didn't the Supreme Court weigh in on this?
Yes. The court upheld the Medicaid expansion but limited the federal government's ability to penalize states that choose not to participate.

Will all states that expand Medicaid do it the same way?
No. Many states negotiated "waivers" as a condition of participation. Example: Republican Gov. Rick Scott of Florida announced that he would back expansion just hours after the federal government agreed to allow his state to enroll almost all of its Medicaid people in private managed-care plans.

How many states have decided to expand Medicaid?
So far, governors of 24 states plus the mayor of the District of Columbia have committed to it. But not all of the state legislatures have approved funds for the expansion.

How many states have opted out?
The governors of 14 states have said they oppose the Medicaid expansion, although the debate is still going in several of them.

That leaves 12 states. Do they have a deadline to decide?
No.

Why would a state opt out?
Even with all the help from the federal government, most states will still have to cover the added administrative costs related to the expansion. Some state officials also say they are concerned that the expansion will encourage eligible people who hadn't already enrolled in the program to do so, increasing the ranks of Medicaid recipients to unaffordable levels. Then, beginning in 2017, states will pay an increasing share of the costs (see the last question on the previous page).

What will happen to low-income adults in states that don’t expand Medicaid?
Many could be in a tough spot. One possibility is buying private insurance through an online health insurance "exchange," which all states are required to set up by October under the new health care law. But that option could be unaffordable: There are federal subsidies for this kind of insurance, but ironically the income eligibility requirement is too high for low-income people. (The exchanges were set up on the assumption that all states would expand Medicare coverage for their lowest-income adults.)  So without expanded access to Medicaid, millions of people may fall through the cracks.