Calling it “a potential game-changer" for start-ups and small businesses, President Obama has signed legislation that will, depending on your point of view, either improve the economy by creating jobs or pave the way for the wholesale fleecing of unwitting investors, many of them older Americans.

The bill, styled the JOBS (Jumpstart Our Business Startups) Act, sailed through the House by a vote of 380-41, with lawmakers from both parties hailing it as a way to boost a languid economy, and through the Senate by a vote of 73-26. President Obama has said that he will sign the legislation. 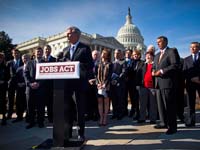 The JOBS Act aims to free entrepreneurs of regulatory red tape, making it easier for “emerging growth companies” to raise capital. That, argue the bill’s proponents, including a large number of venture capitalists, will help create jobs, as well as innovative enterprises.

Obama said that the legislation represents "exactly the kind of bipartisan action we should be taking in Washington to help our economy."

Critics of the measure, who’ve called it everything from “a disgrace” (Arthur Levitt, former chairman of the Securities and Exchange Commission) to “investor rip-off legislation” (journalist Robert Kuttner), say that it will roll back important investor protections, including some put in place in 2002 after the Enron and WorldCom accounting scandals.

The JOBS Act will change the rules in three major ways.

1. It will exempt companies with annual revenue of less than $1 billion from certain financial disclosure and governance requirements in connection with initial public offerings (IPOs) of stock. Under current law, companies that seek to go public are required to file detailed disclosure documents about their finances and operations with the Securities and Exchange Commission, which vets the filings before it authorizes IPOs.

2. The law will allow small companies to raise up to $1 million a year through “crowdfunding” — the sale of small amounts of stock to many investors — without registering the shares for public trading with the SEC.

3. Under current law, small companies that offer and sell stock under a provision of the Securities Act that allows them to bypass normal SEC registration are barred from general solicitation of investors. The law will free those companies to solicit investors virtually without restriction.

The measure has drawn criticism from many advocates for consumer protection, including AARP. In a letter to congressional leaders, Joyce Rogers, AARP’s senior vice president for government affairs, noted that “older investors ... with a lifetime of savings and investment are disproportionately represented among the victims of securities fraud.” Without the inclusion of additional safeguards, she said, the legislation could “open the floodgates to a repeat of the kind of penny stock and other ‘boiler room’ frauds that have ensnared financially unsophisticated and vulnerable investors in the past.”

And, Rogers warned, crowd-funding websites, in the worst cases, “could become the new turbo-charged pump-and-dump boiler room operations of the Internet age.”

Lynn E. Turner, a former chief accountant at the SEC, sounded a similar warning. “People come to the elderly, who are the most likely to say ‘I’ve got to have enough money to pay my bills,’” he said. “They’ll tell them, ‘This is the next Google, this is the next Facebook,’ and put the hard sell on them. I’ve seen it happen with my own mother-in-law. People try to sell these things and make them sound wonderful and yet they aren’t.”

Turner said that passage of the JOBS Act was all but a foregone conclusion, partly because deep-pocketed venture capitalists — who are generous campaign contributors — lined up behind it.

“This is a train wreck in the making, and I just don’t think we’re going to avoid it,” he said. “We’re in an election year, and those people [running for reelection] will do anything for the cash they need to keep their jobs.”

Kirk Victor is a contributing editor of National Journal.