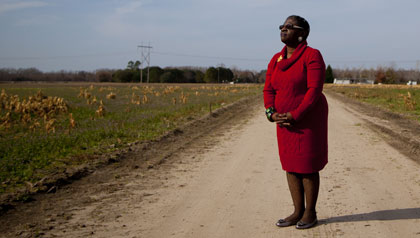 When Brenda C. Williams, M.D., a family practitioner in Sumter, S.C., heard last year that the state legislature would require voters to show a government-issued photo ID, she smelled trouble.

She knew that the births of many older African Americans born at home in the rural South were never officially recorded. Without a birth certificate, they'd have difficulty getting a government-issued ID and would be barred from voting. So Williams made a vow: "We've got to help as many people as possible."

Spending hundreds of hours at her computer, thousands of her own dollars and countless late nights, Williams has helped dozens of citizens get the all-important photo ID card so they can vote in this year's elections. And she has a waiting list.

Of the first 50 people she helped get photo IDs, three were white and 47 black. "This is a poll tax," she says.

For Williams, 59, who carries her late father's tattered NAACP membership card in her wallet, enfranchising voters has been a lifelong quest. Since 1982, she and her husband, Joe Williams, 60, a geriatrician, opened the Excelsior Medical Clinic in 1982, they have registered patients to vote as routinely as they've tested their blood pressure.

"We take care of not only the physical body but the whole individual," she says. "Medicine is about more than blood pressure … People also have social and emotional needs. We work with their feeling of self-worth, and voting contributes to self-worth."

The South Carolina House passed the voter ID bill last January and three months later Williams printed fliers saying she would help anyone who needed an ID to vote.

"I didn't know there were so many roadblocks," she said.

For those whose births were never officially recorded, the first step is to obtain a certified birth certificate. Women may need marriage licenses and divorce papers to show name changes. Then there's a Social Security card and proof of residency. Obtaining the documents can require time-consuming and costly searches on a national online vital records registry.

Williams, who stands 4 feet 11, is a dynamo for social justice. She pulls out her own credit card to pay for documents. She drives around the state, speaking to churches and civic groups about how the new law affects African Americans. She recruits local lawyers who agree to work for free on the hardest documentation cases.

She also has written numerous letters to the U.S. Justice Department urging that the federal government deny pre-clearance approval of the South Carolina law under the Voting Rights Act.

In the final version of South Carolina's voter ID law, a proposed $5 fee for a photo ID was waived. The law's supporters say removing the fee also eliminates any obstacles to getting a photo ID. Williams isn't buying that.

"That's baloney," she says. "The system is set up for people to fail."

Marsha Mercer is a freelance journalist in Northern Virginia.

Also of interest: Voter education guide to the 2012 election. >>