Older workers and retirees are joining demonstrations in cities across the country to protest a downbeat economy, depleted nest egg accounts and a government they say has failed to punish those responsible for America's financial crisis.

The Occupy Wall Street movement, started by college students and young adults, has spread from New York to Washington, Chicago, Los Angeles and other cities with demonstrations calling for change. 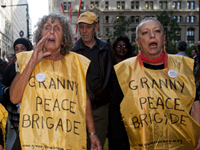 As members of older generations take part, the range of issues has grown. Many are citing a polarized Congress, corporate tax loopholes, growing wage disparity and a depressed jobs market for their angst.

Tammy Bick, 49, has been unable to find a job since her job as a medical secretary was eliminated last year. She trekked to New York from Hamden, Conn., about two hours away, to join the movement. Around her neck hung a sign reading: "My generation will never be able to retire."

Many people share her concerns. In a poll released Thursday by a coalition called Americans for Secure Retirement, 88 percent of 800 registered voters said they were concerned over whether they will be able to maintain their standard of living in retirement.

Bick's grievances go further. She and other protesters say they want financial institutions to be held accountable for lending policies that protesters say brought on the housing crisis and forced millions into foreclosure.

"The country was threatened with the stock market crash," Bick told the AARP Bulletin. "We bailed out the banks and we allowed them to take bonuses for their executives. They're also allowed to avoid paying taxes … because Congress creates laws that allow banks these loopholes."

"The world is watching," Bick adds. "We're hoping to level the playing field for the rest of us."

AFL-CIO President Richard Trumka, whose unions have stepped up support for the movement in recent days, told The Nation that being in the streets is "sometimes the only recourse you have."

Bob Broadhurst, 54, a unionized electrical worker from Boston, has been camping out in New York for nine days to support the protest. He was one of some 700 people arrested last Saturday for alleged disorderly conduct as they marched across the Brooklyn Bridge.

Of his numerous concerns, Broadhurst was particularly vocal about the prospect of cuts to Social Security and Medicare. "FDR would be rolling in his grave if he knew that Social Security was on the table in this debt reduction talks fiasco," he says.