En español | It's not that Wendy Lustbader isn't aware of the challenges of age, from loneliness to physical infirmity. It's just that she believes that the joys of youth are overrated, and the psychological gains achieved by those in midlife and beyond receive too little attention. 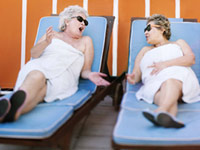 With Life Gets Better: The Unexpected Pleasures of Growing Older, the 57-year-old, Seattle-based gerontological social worker, professor and author aims to add a positive spin to the cultural conversation on aging. Drawing on her own experiences and those of her clients and friends, as well as other sources, she argues that the burgeoning of "inner freedoms" can make growing older surprisingly rewarding.

Her new book, she writes, is meant as "a counterbalance to the negative and stultifying stereotypes about aging that constrain everyone's spirit." In lyrical and meditative prose, she elucidates the effects of gratitude, loss, spirituality and generosity, and stresses the importance of seeking new challenges and intimate relationships. "The answer to death," she writes, "is to live more heartily."

The AARP Bulletin talked to Lustbader about Life Gets Better.

Q. What inspired the book?

A. I've spent the last 30 years of my life in the company of elders. It was really their stories about their lives having gotten better internally as they got older that impressed me. The other thing was the beautiful vibrancy I saw of elders who, even with compromised physical situations, were able to make the most out of their lives.

Q. You note that, to some younger people, it seems that "later life is composed of interludes between disasters." Isn't there some truth to that?

A. It's actually true that elders have more bereavements as people in their own age groups begin to die off, and the physical calamities are real and difficult to deal with. But what we can't see is what is most interesting. We can't see the way people are growing in their confidence, in their understanding of life, and even in their ability to get through hard times. We also don't see how life becomes more and more precious as we become more aware of the ending, and so we live in a more vibrant fashion.

Q. What other misconceptions are there about aging?

A. Younger people think older adults aren't having sex, and that is a huge myth. There's plenty of sexual activity going on and lots of joy attached to it. If we manage to be with a partner over a long duration, intimacy only gets sweeter. Other misconceptions are pretty broad — younger people thinking it's pretty uninteresting to be older, when really it's quite a lively time of life. It's older people who are ready to live their dreams.

Next: Psychological benefits of aging. >>

Q. What are some of the other psychological benefits of aging?

A. We become choosier about where we spend our time and energy. And we get away with our choices more. There's so much more freedom because we're not comparing ourselves to other people the way we did when we were younger.

Q. Don't some older people get more disappointed or sadder?

A. That's important to note: Life doesn't get better for everyone. And the two big exceptions are people who are overwhelmingly self-centered, and people who are stuck in the detours of alcoholism and drugs. People who are caught in self-centeredness lose out on the many opportunities for growing as one gets older. Some self-centered people actually experience an opening of their hearts because of bereavements and physical crises. These are some of the greatest forces of change. And even people on alcohol and drugs … have a chance in becoming clean and sober, even in their 60s, 70s and 80s.

A. This is another one of those paradoxes. There's a good example in the book. A woman who was losing her eyesight and was grieving mightily held a party to give away all of her books to her friends. And a few of those friends offered to start coming over once a week and reading to her. And that became a wonderful experience of a new kind of intimacy.

Q. What about the impact of financial problems?

A. Financial issues are not what determine your happiness — it's how you deal with the circumstances you're in. Even if you are on quite a limited income, that does not equate with unhappiness. That's borne up in the research. And most of the people I worked with over the years were lower-income people. I'm not trying to make light of how hard it is to live on limited means. It takes creativity and guts.

Q. Your book suggests that good relationships are more meaningful than worldly accomplishment. Is that true for everyone?

A. Everyone. I have yet to meet an exception when I've been with people — especially on their deathbeds.

Q. And yet on the eve of a potentially fatal heart operation, my father told me he had just one regret: that his work, in physics, hadn't gotten more recognition.

A. It isn't that one's contribution to the world is not important — in fact, it becomes more and more important as we get older, this feeling of leaving a legacy. There is this huge need to contribute to one's community that we're going to see with the baby boomers more than ever before.

Next: Intimate relationships in old age. >>

Q. Intimate relationships in old age can be hard to come by, particularly for women. Isn't loneliness a real problem?

A. My mother was extremely lonely being in a community that was almost all women. And she actually had this massive crush on a man named Mel. He was recently widowed and just unable to be happy. She brought him to a dance, and said, "It's time for you to get out there and live." She didn't want to become yet another woman hitting on him. That's when she had a stroke, and Mel held her in his arms. My mother died that evening. And when I saw Mel, he said, "Your mother died being a mensch." My mother was someone who suffered from self-centeredness. In the course of the last years of her life, she began to rise out of it. And it culminated that last evening that she lived.

Q. And yet the problem isn't solved if you can only get a man to hold you when you're having a stroke.

A. [She laughs.] Relationships are hard to come by. There's tremendous loneliness, especially for women. Men can turn around and have a woman in a second — it's totally unfair — because women live longer. One of the solaces is some women actually begin to realize how much fun they can have through their friendships instead of always putting the focus on getting a man.

Q. Is there an action plan to help us age with grace?

A. One big hope is that first and foremost we ourselves examine the ageism that we carry. When I look at someone 80 years old with a walker, do I look away? Am I even interested in that person? Am I making assumptions based on appearance, or am I willing to remember that appearances tell you almost nothing about a person?

Q. How do you counter these prejudices?

A. I challenged my grandmother, who did not want to go to a senior center and be around "all those old people." I said, "There could be other live wires disguised as old people." She went and found four people who were fabulously alive and wonderful. As we get older, we become more and more different from one another because we become more and more ourselves. We have to open our eyes and see each other.

Q. Anything else we should do?

A. If we pay attention to the aspects of life that are better — so we know who we are, we know how we want to live, we know what's important to us — it helps us to keep from focusing on what's difficult.