en Español | The fraudsters say you've won a lottery or a free vacation. Or there's a package for you awaiting delivery. They give you a phone number and tell you to call for details.

See also: Can a phone call to your insurer raise your rate?

The come-ons to call may arrive by letter, email or voice mail. If you dial, expect to be hit with a pitch to wire an upfront fee or disclose personal information.

But even if you laugh off that request — you're wise enough to know it's a scam — you may discover you've still been duped, simply because of the area code you used. 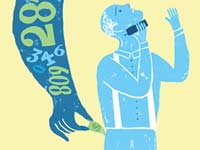 Cons often focus on running up your phone bill not a purchase.

On the surface, the code may seem all-American. It has three digits, and there's no 011 international dialing code in front of it. You think you'll be paying just a few cents a minute for a U.S. call. But, surprise, you've just called a foreign country.

If the area code is 284, 809 or 876, you've called Jamaica, the Dominican Republic or the British Virgin Islands, new hotbed homes of telephone scams. Similar cons are also run out of other Caribbean islands.

For these calls, you'll typically pay $1.49 to $3.99 per minute, depending on the plan and carrier. You're never told this, but the numbers function like American "premium rate" lines that use the 900 area code, with sky-high rates that are split between phone companies and those who operate the lines.

Dial one of these Caribbean numbers and chances are you'll get pitched for some scam. But the thieves' real goal is often just to keep you on the line as long as possible and maximize their take. You'll endure long holds, frequent transfers and lots of small talk. Result: A call lasting just a few minutes can cost more than $20, a charge you discover only when your phone bill arrives.

Some cons try to get you to call Canada, which also has three-digit, U.S.-style area codes. But this time it's generally not about your phone bill but various fake prizes or the notorious "grandparents scam" — you're told your grandchild has been arrested and needs you to wire bail money.

If you try to contest such a charge with your telephone company, it may push back, saying that all it did was connect you to a foreign number that you willingly dialed, and that it has no control over the high per-minute costs.

In that case, you can go to the Federal Communications Commission website to tell your story. Or call the FCC Consumer Center at 1-888-225-5322. There's no guarantee you'll get the charges voided, but your tale could help build a case for tougher regulations against this kind of scam.

Your best strategy: Avoid the charges in the first place. Never call back a strange long-distance number. First look up the area code by going online or checking the area code charts in the front section of your phone book. Don't dial unless you know exactly where you're going.