En español | The tip-off can come when you try to e-file your tax return but it won’t go through. Or when an expected refund doesn’t arrive. Or when the IRS sends you a letter saying that multiple returns were submitted in your name.

Before assuming it’s a technical glitch or red-tape snag, consider a growing possibility: You’ve been hit by tax ID theft. 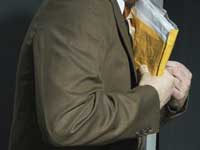 That’s when a fraudulent return is filed electronically under your identity so crooks can collect your refund. All they need is your name, Social Security number and birth date — and a computer. No W-2s or other tax documents required. They just make all that information up.

Ninety percent of IRS refunds are issued within 21 days of the IRS receiving them, says an IRS spokeswoman. Some go out in as little as 10 days.

But, she adds, it can take several months longer — sometimes not until summertime — for the IRS to receive tax-related paperwork issued by employers and confirm the income numbers with claims made on tax returns.

So by the time the ID theft is discovered, your refund has gone to a scammer. It may be direct-deposited into a bank account temporarily used by the scammer under the false identity, mailed out as a Treasury check (often to a vacant home) or preloaded on a debit card, from which the money can be withdrawn from an ATM.

One consolation: You as the taxpayer aren’t liable for the missing refund — the IRS will eventually send you the money you’re due.

How to protect yourself? Filing early may do the trick — but scammers file early, too. Other than that, you should do all you can to safeguard the personal data that, in the wrong hands, make this crime possible.

The IRS cracks down

The spokeswoman says that the IRS deals with returns from 140 million households a year: “We try to get people’s tax refunds to them as quickly as possible while making sure the integrity of the system is whole and sound.” Combating ID theft crime is a “top priority,” she says.

Crooks may get thousands of dollars per fake return; real taxpayers are left with a hassle-filled ordeal of having to prove their own identity to get the money they’re owed. Or worse — if a taxpayer is receiving disability benefits, the Social Security Administration could take the return as evidence that the person is working, and cut off the benefits.

In January, the IRS and the Justice Department announced a nationwide crackdown targeting 105 people in 23 states allegedly involved in identity theft and tax refund fraud. Federal investigators are also eyeing 150 money service businesses and auditing 250 check-cashing businesses that the IRS says may “knowingly or unknowingly” be facilitating refund fraud.

More recently, the IRS charged a high school student in Louisiana with tax fraud after she was found with the Social Security numbers, addresses and birthdates of 189 classmates.

But in its latest report to Congress,  the Taxpayer Advocate Service (TAS), an independent organization within the IRS, said that there are “over 50 gaps in IRS procedures” to adequately prevent, detect and resolve this crime.

“The system is definitely broken because the [privacy] laws on the books are designed to protect the taxpayer,” says Laura McElroy of the Tampa Police Department, which is playing a lead role in police efforts to combat tax ID theft. “But with the advent of e-filing, those laws now protect the criminals. As we’re investigating, the hands of the IRS are tied because it can’t provide us with taxpayer information.”

Tampa police began a six-month investigation after noticing that the illicit drug trade was waning. Traffic stops of known or suspected dealers were turning up not crack cocaine but "massive amounts" of preloaded debit cards, ledgers and laptop computers used to e-file fraudulent returns.

Investigators eventually found that identity theft instructors had been teaching weekly classes to up to 100 people, some of them drug dealers, on how to steal identities.

“Criminals find insider ‘moles’ who work at a corporation,” says McElroy. “For $200, they can buy the names, SSNs and birthdates of 10 victims from moles who can, and do, work at places that cater to an aging population, such as a medical facility.”

A sting by Tampa police, the U.S. Postal Inspection Service and other agencies brought the arrest of 49 alleged tax-related identity thieves. In addition, the USPIS intercepted some $100 million in mailed bogus tax refunds before they reached scammers.

In this type of identity theft, anyone is at risk. But the dead are special targets – with help from Uncle Sam. The Social Security Death Master File, available online, is another way that crooks can get everything needed for a fraudulent e-filed tax return.

Consider the case of Craig Steven Jarrell, who died unexpectedly at age 49 on Jan. 2, 2011. Two months later, his grief-stricken mother – AARP member Leah White, 70 – tried to e-file his 2010 return. “But it was rejected at the IRS website,” she says.

The reason: On Feb. 1 – just a few weeks after Jarrell’s obituary was published online – a scammer in Florida filed a fraudulent tax return under his identity. About a week later, a $1,500 refund for Jarrell was direct-deposited into a bank account in Boca Raton.

“My son lived here in Michigan and never even visited Florida, but a deposit was made into a bank account there in just a few days, no questions asked,” White told Scam Alert. “But even after the IRS confirmed the fraud, I still had to provide his birth certificate, death certificate and go through all kinds of rigamarole to finally get his refund check.”

Jarrell’s actual amount of $432 finally reached her in December.

In all likelihood, the Florida scammer might have happened upon Jarrell’s obit and then gleaned his personal data from the SSA’s Master Death File.

You may also like: Tips for taxpayers who owe money to the IRS.