En español  |  The best steak I've ever eaten was one that we grilled over a small campfire in our backyard on July 4, 2002.

And that wasn't because I splurged on an expensive cut of meat. No, that steak tasted so delicious because of the very special fire it was cooked over: We started the fire by setting a match to a copy of our home mortgage, which we had just finished paying off. A few years into home ownership, we refinanced from a 30- to a 15-year mortgage and doubled-down by enrolling in a no-cost mortgage acceleration program. Then a few years down the road, we made an additional lump sum payment and were able to pay off our 15-year mortgage four years early. In essence, we paid off our home in 16 years and it's the one and only house we've ever called home since 1986.

Without a single penny of debt to our names, that July 4 wasn't just America's Independence Day, it was our Financial Independence Day. From that day forward, we were free from the shackles of debt and free to spend more of our time doing something other than simply earning a living.

Celebrating your own financial independence may seem like a pipe dream. But if you try to integrate the following four basic financial principles into your life, that celebration might not be as far off as you think.

1. Live within your means always, and live below your means whenever you can.

Spend no more than you earn and, preferably, even less than you earn. It sounds so obvious and simple, but it's all too rare. A 2011 survey commissioned by a financial consortium including the Certified Financial Planner Board of Standards showed that nearly one-third of all Americans are living so close to the financial edge that they would be unable to make their mortgage or rent payment beyond a single month if they lost their job. Ten percent of respondents earning $100,000 per year or more said they would immediately miss a payment!

Ideally, you should develop a household budget — and a lifestyle to match it — in which you spend no more than 60 percent of your income on life's true necessities (housing, food, transportation, etc.) and no more than 20 percent on "wants" (entertainment and other discretionary expenses). You should aim to set aside at least 20 percent as savings. 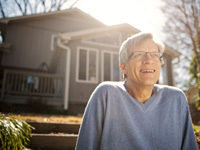 Pay off your home mortgage as quickly as possible, preferably before you retire.

If you establish good financial habits and routines for both saving and spending, you'll avoid the hassles and stress of always having to worry about money. Put your finances on "autopilot" as much as possible.

Have your paychecks deposited directly into your bank accounts (including a portion of each check into savings). Arrange for your recurring monthly bills to be paid automatically out of your checking account so you avoid late fees, penalties and interest.

On the spending side, make the most economical choices the most convenient choices and you'll spend less, day in and day out, without even thinking about it. For example, carry a bag of groceries with you to the office every Monday so you can make your lunches for the week on the spot. You'll find that you'll actually do it since it's even more convenient — and cheaper — than running out for fast food.

Most people can make major progress toward getting their finances in order by simply reining in their discretionary spending. That means limiting spending on unnecessary items, including so many things we later regret purchasing. Try waiting a week between the time you're tempted to buy something in a store and when you go back to buy it. I'll bet that at least half the time you'll lose interest and never go back to buy it.

Also, review your routine monthly expenses — like insurance, phone service and even rent or mortgage payments — every six months, and look for creative ways to lower those so-called fixed expenses. You'll be surprised how much you can save by comparison-shopping for such services, or even calling your current providers and asking them point blank to help you find ways to lower your monthly bills.

4. Most important of all, avoid debt like the plague and, if you have debt, make paying it off a top priority.

Being a professional cheapskate, I'm often asked, "What's the single biggest thing you and your wife do without because of the frugal lifestyle you choose to lead?" The answer: debt. That's right. Like most frugal folks I know, we've never had the pure, unadulterated joy of paying nearly as much in interest and bank charges as the typical American pays. (Yes, I'm being sarcastic … but honest).

Data recently compiled by the website CreditLoan.com shows that the average American will pay more than $600,000 in interest over his or her lifetime! The solution is to adopt the financial philosophy your grandparents probably happily lived by, recognizing that if you can't afford to pay for it now, you simply can't afford it.

Pay off your home mortgage as quickly as possible, preferably before you retire. Consider enrolling in an accelerated mortgage payment plan, paying additional principal each month, or take advantage of low interest rates to refinance your home for a shorter term. Paying off your mortgage sooner will likely save you thousands of dollars in interest.

Trust me, there's nothing finer than a steak grilled over a mortgage-burning flame.

Jeff Yeager is the author of three books, The Ultimate Cheapskate's Road Map to True Riches, The Cheapskate Next Door and Don't Throw That Away! His website is UltimateCheapskate.com and you can friend him on Facebook or follow him on Twitter.