The latest "Retirement Confidence Survey" released by the Employee Benefit Research Institute might be better titled the "Retirement Uncertainty Survey." Almost half of the workers surveyed said they have little or no confidence about having enough money to retire comfortably.

Personal debt, declining savings levels, concerns over rising health care costs and possible job loss were among the chief worries of those surveyed. But what really jumped out at me was that less than half of the respondents said they had attempted to figure out how much they'll need to save for retirement. 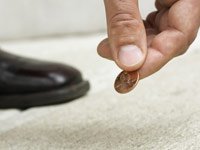 Cheapskates recognize that even the smallest act of frugality helps to instill and reinforce an "ethic of thrift."

In my new book, How to Retire the Cheapskate Way: The Ultimate Cheapskate's Guide to a Better, Earlier, Happier Retirement, I encourage you to become the CFO — Chief Frugal Officer — of your household. Fully understanding and controlling your spending is as important when planning for retirement as smart investing. You need to figure out exactly where your money goes today and where it will be spent when you're retired.

Here are five key principles for how to retire the cheapskate way.

1: Live not just within your means, but consistently below your means throughout your working years.

Spending less than you earn sounds simple enough, but it's quite rare. A 2012 survey by the American Payroll Association found that more than two-thirds of Americans report living paycheck to paycheck.

Cheapskates frequently adopt what I call a "permanent standard of living." They decide at a relatively young age that they're content with the lifestyle they're leading. So, even when they make more money, they refuse to increase their spending. Avoiding this "lifestyle creep" allows them to live marginally below their means. Financial security and the peace of mind that comes with it are the trade-off for not always driving a new car or constantly hopping from one house to a larger, more-expensive home.

By adopting this approach, frugal folks are able to set aside greater savings for retirement throughout their income-earning years. So, later in life, they won't need to gamble on risky investments in an attempt to make up for lost time. By living below their means, cheapskates have been test-driving their retirement budgets and lifestyles for years. Once retired, their spending and lifestyles typically change very little.

2: Retire your debt before you retire.

Cheapskates are hard-liners when it comes to debt. With few exceptions, they live by the old school saying, "If you can't afford to pay for it now, you simply can't afford it." They avoid debt like the plague, and when they do take on debt — most commonly in the form of a home mortgage — they place the highest financial priority on paying it off as quickly as possible. With the average American estimated to spend more than $600,000 on interest in their life, cheapskates accrue huge savings by avoiding debt and banking what they would otherwise pay in interest.

When it comes to retirement, cheapskates believe that — almost by definition — you're not ready to retire until you've retired any personal debt, including paying off your home mortgage. In fact, they feel so strongly about it that they advocate selling off assets or postponing retirement in order to retire debt-free.

Alyne talks with Jan Cullinane, author of the book The Single Woman’s Guide to Retirement, a book endorsed by AARP.

3: Never underestimate the power of saving.

Ben Franklin famously said, "A penny saved is a penny earned." But when you think about it, a saved penny is actually worth more than an earned penny (once you factor in the taxes paid on most earned pennies, the costs typically incurred in earning that penny and the fact that a saved penny can be invested). Cheapskates understand this and place a priority on savings. They also recognize that even the smallest act of frugality — literally bending to pick up a loose penny on the sidewalk, for example — helps to instill and reinforce an "ethic of thrift" that makes wasting any amount of money that much harder.

Social Security was never intended to be the sole source of income for retirees. In fact, the system is designed to replace only about 30 to 40 percent of your preretirement income. For most people, it's absolutely essential that they have other income (e.g., a pension plan, investment income, a part-time job, etc.) in addition to Social Security to live safely and comfortably in retirement.

That said, many retired cheapskates I've met have elevated the stretching of their monthly Social Security checks to a near art form, often more for sport than economic necessity. A common approach among frugal retirees is to reduce their fixed monthly expenses — the true necessities of life (food, housing, clothing, transportation, health care, etc.) — to the point where those costs can be covered by their Social Security income. Any additional income can then be used for discretionary expenses or emergencies or plowed back into savings. Cheapskates also typically delay collecting Social Security as long as possible in order to receive larger monthly benefits, assuming their health is relatively good.

5: Simple-sizing your life not only saves you money but reduces stress and makes you happier.

"Downsizing" is a common practice among retirees and those on the cusp of retirement. I found that cheapskates tend to practice what I call "simple-sizing" throughout their lives. They routinely choose to simplify their lives both to save money and to increase their happiness. Whenever possible, choosing the least complicated option — from a computer with fewer bells and whistles, to living close enough to where you work so that you can walk or take public transportation — tends to cost the least and allows us to focus on the things that are truly important in life, often those things that come without a price tag.

Jeff Yeager is the author of four books including How to Retire the Cheapskate Way and The Cheapskate Next Door. You can follow him on Facebook and Twitter.