Q. When I go grocery shopping, I feel like I'm paying more money for the same amount of food I typically buy. Am I?

A. If ground beef is on your shopping list, you're paying nearly 50 cents more per pound than you did at this time last year, according to the federal government's latest price survey.

See also: Are you throwing your money away?

You may want to give up your morning joe when you see how much ground roast coffee went up: It's now $4.64 per pound, up from $3.57 at this time last year. Bananas rose by 4 cents to 62 cents per pound while broccoli climbed 11 cents to $1.75 per pound.

Prices vary by store and region. You may find you're paying more, or less, for some of these items depending on where you live.

The government tracks the prices of certain foods month to month and year to year as part of the work to determine the consumer price index (CPI). The cost of gasoline, electricity, commodities, medical care and other goods and services also figure in the CPI. 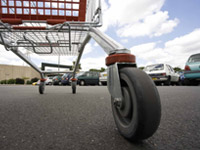 The cost for groceries is rising and you may get less bang for your buck.

Between March 2010 and March 2011, the CPI increased 2.7 percent, mostly because of skyrocketing gas prices but also because of food — grocery store prices overall were up 3.6 percent in that period, with the meats, poultry, fish and eggs category up nearly 8 percent.

If you're wondering about other staples in your pantry, here are more examples of changes between March 2010 and March 2011: