En español | The care and feeding of the average 15-year-old runs $13,530 per year, according to the latest figures from the U.S. Department of Agriculture. That's 13 percent more than a five-year-old costs. Plus, as parents we are now paying 20 percent more to raise our kids through age 17 ($222,360) than our parents spent to raise us. 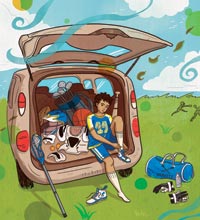 When shopping for sports equipment, try used instead of new.

That's not exactly news to parents familiar with teens' insatiable appetites for the newest clothes and gadgets — not to mention food. But you can attack the high cost of adolescence with a few key strategies. Here are some smart ways to save money on pricey teen essentials.

1. Braces
If you don't have dental insurance, search for a plan at dentalplans.com that, for an annual fee of $100 to $200, will discount at least some of your orthodontist's bill. Prices vary from practice to practice, so shop around for orthodontists, too. You can save for these bills pretax in your flexible-spending and health-savings accounts. For big savings, find a college or university near you with an orthodontics program. You can get great care from orthodontic residents supervised by experienced orthodontists for about half to two-thirds the cost of a private practitioner. To find a program at one of the 52 dental schools throughout the United States, search the Web for "orthodontics program" and your city or state.

2. Cars
Don't just buy your kid an old clunker. "For cars built after 2001 there was a quantum leap in safety standards — exactly what teens need," says Dan Rheinstein, an auto mechanic in Mamaroneck, New York. Besides, you could easily end up paying more in repair bills after a year or two than you would have if you'd bought a solid used vehicle no more than five or six years old.

The cheapest car, of course, is no car at all: A bus pass and a bike would be safer, greener, and easier on everyone's wallet, if transit access is available. Teen driving rates have been falling lately — in 2008 only 49 percent of 17-year-olds had licenses, down from 75 percent in 1978 — so resisting peer pressure should be easier.

3. Cell phones
Beware adding your teenager to the family's cell-phone plan: Extra charges and fees can pile up. A smarter alternative may be a prepaid service plan, which offers a fixed number of minutes and texts per month. Having to mind their usage time will teach teens important basics about money management, says Kobliner. Tracfone has low monthly fees for a variety of minutes and texts, and Kajeet provides parental controls via the Web, so you can set times your child can accept and make texts and phone calls.

4. Clothes
Buy in batches in the spring, when sales are rampant. This helps you stick to a budget and avoid constantly adding a belt here, a new pair of shoes there. Check out sites such as fatwallet.com, dealio.com, and retailmenot.com for bargains, and join the customer-loyalty programs at retailers such as the Gap, Old Navy, Target, and others. As for those must-have fad items that "all the other kids are wearing," tell teens to buy them with their own money. They may discover they won't die if they don't get the latest Aéropostale sweatshirt.

5. Computers
Think netbooks. Compared with laptops, these mobile machines are smaller, simpler, and cheaper — they cost from $200 to $450. They aren't great for photos, videos, or gaming. But for portability and the basics, netbooks do just about anything a teen needs to do, says Sam Costello, technology expert at About.com. Though your teenager may lobby for an iPad, be wary. Apple's blockbuster gizmo is more expensive than most netbooks, and its color touch screen is tricky to type on. If your child will be using the machine for homework, reports, or any other heavy-duty word processing for school, a keyboard-equipped netbook is the way to go.

6. Games
For new and used games, watch for deals from online retailers such as GoGamer.com and Amazon.com or the retail chain GameStop. Swap sites such as swap.com and videogameswap.com can help your teen unload old games and get something new. (These sites are also a great way to trade books, CDs, and DVDs.)

7. Musical instruments
Go low-tech: your local music store. You'll want your child to try out anything he or she is serious about learning ( impossible via the Internet). Opt for buying (or renting ) used instruments, especially for beginners.

8. Sports equipment
The Play It Again Sports retail chain sells new and used equipment. It also accepts trade-ins for a variety of sports gear. (Don't buy used helmets; they can be unsafe.)

9. Tickets
Smarttix.com offers deals for concerts, shows, and other events. For cheap airline tickets and hotel rooms, Travelocity.com, Hotwire.com, and Expedia.com are good bets. WorldBackpackers.net caters to the youth-hostel crowd with lots of good travel information and savings advice.