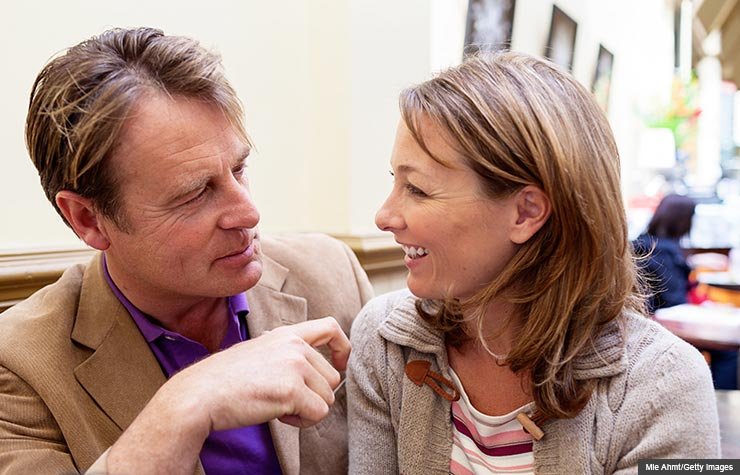 Are you attracted to the people who are right for you?

En español | A woman I know got divorced in her 30s, went to medical school and became an internist in her 40s, then married a hairdresser at 56.

"Where did you meet him?" I asked. (Clearly not at his salon; she looked like she didn't go.)

"We belonged to the same gym," she explained. One night, after chatting on adjacent treadmills, they had dinner. "And every night after that," she said, grinning. "I fell madly in love."

"How is this marriage different from your first?" I asked. (Husband No. 1 had been a successful architect.)

"My first husband didn't get me. This guy does." Her smile widened. "I'm a lucky lady."

Luckier than I'd been, I had to admit, with my own post-divorce dating years earlier. One of the first guys I went out with was a plumber. Because he intrigued me, I overlooked the fact that my work (teaching writing) and my interests (movies, theater, books, swimming, hiking in the woods and killer cutthroat Scrabble) seemed to hold his interest less than a clogged toilet. Eventually he became depressed and incommunicative, forcing me to face up to the real problem: He just did not get me — nor I him.

Mutual understanding can neutralize all sorts of disparities in a relationship: differing backgrounds, differing employment, differing education. Shortly after my divorce, for example, I fell for a guy who had little in common with me. Yet I could overlook his lack of interest in reading, I quickly realized, because he filled larger needs: He was flexible and kind to me and to my daughter (for whom he babysat on the evenings I worked). He loved to cook, to fix things. He was a joy around the house. With his two daughters, a few years older than mine, we enjoyed group meals and weekend outings.

Indeed, we were well on our way to becoming a regular Brady Bunch when he confided that he had strayed when problems arose in his marriage.

Discuss: What do YOU look for in a relationship?

Because so much felt so right, I tried to pretend his past cheating did not bother me. But it did. Then he asked me to marry him. I said I would think about it, but we both knew I was thinking "No." Shortly after, I found another woman's lipstick in his bathroom. Confronted, he informed me that he planned to start seeing other women unless I could commit to a long-term relationship. He soon became history.

I have friends who tolerate cheating, but it's a deal breaker for me. Is that so wrong? I decided to put the question to Barbara Barak, Ph.D., a Long Island psychotherapist and relationship counselor. "You need trust in a relationship," Barak confirmed. "You want to know someone's dependable, and trust leads to respect."

Incompatibilities don't always manifest themselves right away. And even when a red flag pops up, we often ignore it. The reasons are many: loneliness, lack of self-esteem, not trusting our instincts, charity (that is, deciding to give people a chance) or the fear of appearing too demanding.

All five of those played a part in the last long-term relationship I had before I remarried. There was something chilling about "Gerry's" eyes; they seemed to be shooting daggers my way. So when he called the day after our first date, and again the following week, I said I was not available.

Then I got invited to a colleague's party. On the surface, at least, Dagger Guy fit the bill as my potential "plus-1": good looks, solid job, grandchildren — you get the picture. So I overruled my own danger alerts, and called him. I was glad I did — at first — for six months of relatively smooth dating ensued. But then one night we had what seemed like a minor difference. In my eyes it was discussable, negotiable; in his it was cause to erupt, to get nasty-bordering-on-scary. Once this happened a few more times, I'd had enough of cowering, so I broke it off (safely, thank God). By then I could no longer ignore that our temperaments would never be compatible.

"In all relationships," notes Barak, "at every age, you're deciding which areas you can compromise in. Seniors have different issues — health, finances, families — that may include grown children, grandchildren, elderly parents, and how and where to live upon retiring." One widowed patient of hers, for example, spent four years caring for her very sick husband. Now she wants to start dating again, but she's unwilling to compromise on the issue of "health compatibility."

"You can't ever know everything about a person," says Barak, "or what the future holds. So every couple should discuss early on what they each want, what is negotiable, and on what they can compromise. That way you can split the difference, rather than letting your differences split you."

Nancy Davidoff Kelton is one of AARP's dating experts.