En español | People may have snickered last month when 84-year-old Playboy founder Hugh Hefner announced that he had asked a 24-year-old Playmate to be his third wife, but a new study shows that more men are staying sexually active in their 70s, 80s, even 90s. 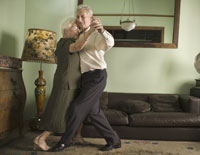 It takes two to tango.

And — something Hef would appreciate — more than 40 percent of sexually active men say they wish they were having sex more often.

The study by Australian researchers of nearly 2,800 men ages 75 to 95 found that nearly half of older men consider sex important in their lives and a third reported having sex at least once within the previous year.

The study was published last month in the Annals of Internal Medicine.

Lead author Zoë Hyde of the Western Australian Centre for Health and Ageing acknowledges that people get uncomfortable talking about sex and older people. Not much research has been done on the subject, and she writes in the study's introduction that "attitudes persist that older persons are not capable of or lack interest in sex."

Based on what her researchers found, however, "a healthy sex life is not only for the young," she says. Hyde says there needs to be greater awareness of sexual fulfillment as an "important quality of life issue for many older people."

"Sadly," she adds, "there seems to be a perception among many people, including some doctors, that it isn't appropriate for older people to be sexually active."

In the study, researchers interviewed men three times about their health and sexual activity between 1996 and 2009. All the subjects lived in a community in western Australia (none were in nursing homes or care centers), and three-quarters were married or in a marriage-like relationship.

Although nearly 49 percent of the men indicated that sex was at least somewhat important in their lives, the research also showed that health problems were often a barrier to remaining sexually active as men age.

Next: The impact of health concerns. >>

Diseases such as diabetes or prostate cancer, as well as a partner's physical limitations or lack of interest, were among the main reasons men ceased having sex. Side effects from medications like antidepressants and beta-blockers also played a role in diminished sexual activity — a factor that Eric De Jonge, M.D., director of geriatrics at Washington Hospital Center in Washington, D.C., says is sometimes overlooked by physicians.

"Medications can have an effect on sexual function, and it's important for doctors to be aware of this as a quality-of-life issue. Older patients also need to talk to their doctors about medications and their side effects," he says.

De Jonge, however, says the importance of sexual activity should not be overstated.

"Yes, 49 percent of the men in the study said it had some importance, but the majority of men don't see it as very important. It's nice to have, especially if you're healthy, but not high on the priority list," particularly when compared with overcoming a severe illness or other major life event, he says.

De Jonge also notes that the study only involved men. "My next question would be, how do their partners feel? And how do you create healthy relationships in people this age so that both can be satisfied?"