En español | For years health experts have advised us to shun whole-fat dairy products and substitute low-fat or nonfat fare instead. But now researchers have determined that a natural compound found in dairy fat may substantially reduce the risk of developing type 2 diabetes. 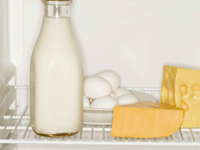 "This research raises questions regarding our assumptions about dairy fat," says epidemiologist Judith Wylie-Rosett, head of behavioral and nutritional research at Albert Einstein College of Medicine in New York. "We probably don't need to be quite so rigid about avoiding it."

If you want a piece of cheese now and then, you can certainly have it, says Wylie-Rosett, who wasn't involved in the study. "And if you like 2 percent milk instead of skim milk, go ahead and use it," she says. "An eating pattern that includes some whole-fat dairy as well as fruits, vegetables and legumes is reasonable. But you have to choose wisely. Cheeseburgers and a lot of processed food is not the way to go." That glass of 2 percent milk, for example, has about 40 more calories than skim milk — not a huge jump, but if you drink a lot of milk, it can add up.

The compound at the center of this research is a naturally occurring fatty acid found in milk, cheese, yogurt and butter with the tongue-twisting name trans-palmitoleate, which is not produced by the body but comes only from food. Although it's a trans fat, trans-palmitoleate has not been linked to an increased risk of heart disease as have partially hydrogenated vegetable oils found in commercial baked goods, fried foods, shortening and some margarines.

Scientists at the Harvard Medical School and other institutions suspected that trans-palmitoleate may explain recent studies showing that diets rich in dairy foods are linked to a lower risk of type 2 diabetes. To confirm the relationship between trans-palmitoleate and type 2 diabetes, the scientists examined records of more than 3,700 men and women age 65 or older who took part in the long-running Cardiovascular Health Study.

At the start of the study, participants completed a questionnaire about the foods they ate; three years later they provided blood samples. Using these samples, the scientists measured blood glucose, insulin and fatty acid levels, including levels of trans-palmitoleate. They found that those who consumed the most whole-fat dairy products had the highest blood levels of trans-palmitoleate and also had healthier cholesterol levels, less fat around the middle and a lower BMI, a measure of weight relative to height. They were also 62 percent less likely to develop type 2 diabetes over the next decade than those with the lowest levels.

"The magnitude of that association surprised us," says Harvard epidemiologist and cardiologist Dariush Mozaffarian, M.D., the article's lead author. But this is only one study, he notes, and further research needs to confirm the findings.

"If the beneficial factor in dairy is related to fat," Mozaffarian continues, "either a fatty acid as our research suggests, or something linked to fat, we could be reducing health benefits by urging people to consume nonfat products.

"This research could be a flash in the pan or it could turn out to be very important and help us reduce diabetes risk worldwide," Mozaffarian concludes. "We're excited but cautious in our optimism."