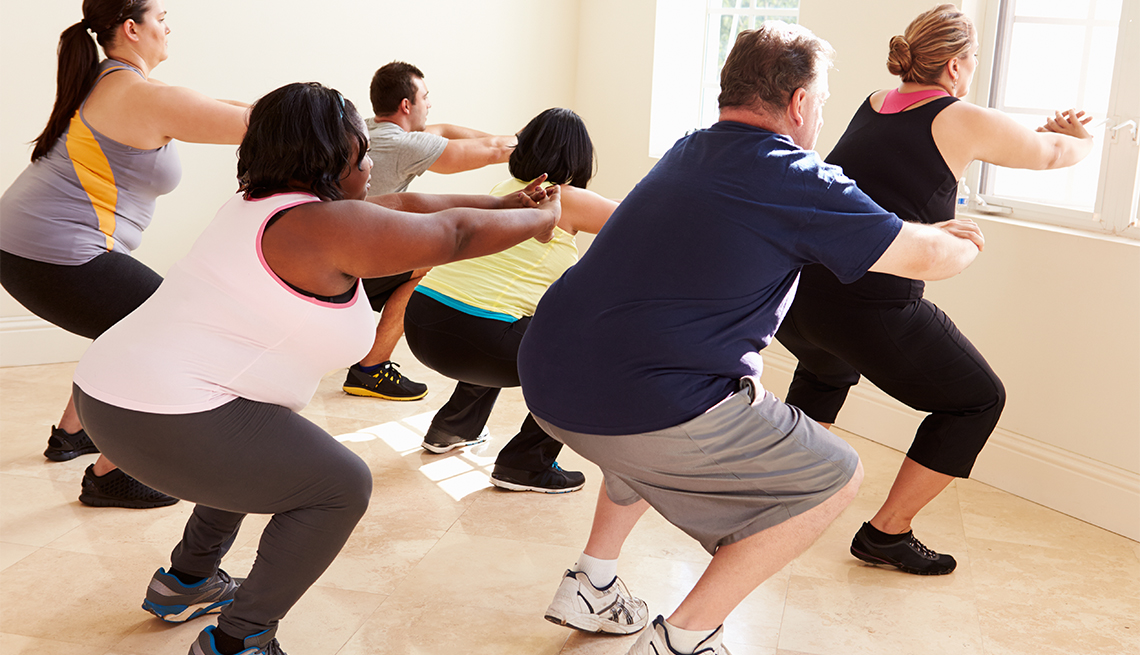 En español | Many who are overweight say they feel stuck, that their weight keeps rising even though their lifestyle hasn't changed. Beginning in early adulthood, the average person puts on one to two pounds a year through middle age, a Washington Post analysis of Centers for Disease Control and Prevention data found.

In fact, 7 out of 10 adults over age 50 are overweight or obese, according to the MARS 2019 Doublebase Study on consumer health, which combined data from nearly 40,000 people.

Thanks to those studies and more, added weight has come to be seen as a symptom of aging. So, is it OK to keep the extra pounds if vitals and lab results come back within a healthy range? We spoke with four health care professionals to hear their perspectives.

Is it OK to remain overweight at age 50 or older if vital signs and blood tests indicate healthy results?

Melissa Rifkin, a bariatric dietitian at Montefiore Health System in the Bronx, New York, says “it's never” OK to be overweight “as the complications with weight gain increase, including metabolic conditions like high blood pressure and diabetes, heart disease, some cancers, gout, gallbladder disease and gallstones, sleep apnea and osteoarthritis.”

Or as physician Jenine Vecchio, medical director of the Diabetes Center at Deborah Heart and Lung Center in Browns Mills, New Jersey, puts it: “As you age, your risk for developing health problems increases, and the extra weight can compound these conditions.”

But how heavy is too heavy?

"Once your BMI reaches the obesity level, you are dramatically increasing your chances of developing another health problem,” Vecchio says. 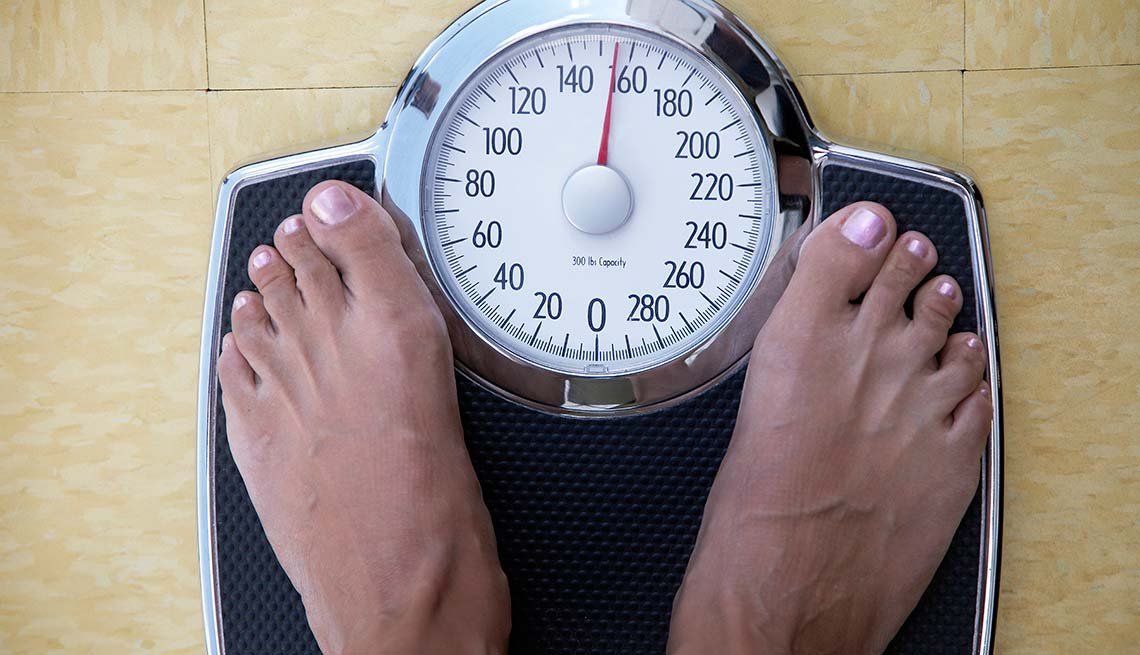 BMI by the numbers

Your body mass index (BMI) is an estimate of your body fat that is based on your height and weight. Doctors use BMI, along with other health indicators, to assess an adult's health status and potential health risks. Calculate your BMI here.

Underweight: BMI is less than 18.5

Susan Besser, a family medicine practitioner with Mercy Personal Physicians at Overlea in Baltimore, says the numbers count. “In my own patients, if their BMI is 28 — you could lose a couple pounds, that'd be nice. But I'm not going to push it,” she says. “If their BMI is 50 and they tell me, ‘But doc, I feel great.’ Eh no, there's no way that someone who's carrying around that much weight can possibly really feel great."

Physician W. Scott Butsch, director of obesity medicine in the Bariatric and Metabolic Institute at the Cleveland Clinic, notes one exception: for people who have built up their muscles. He says BMI is “based on height and weight. And we know that when we get on a scale, we are weighing not just body fat mass, we're weighing muscle mass as well. If you have an individual over the age of 50, sort of on the muscular side, then their BMI may overestimate their risk of death."

Does it matter where the fat is?

"As women go into menopause and men go into andropause, we're more likely to gain belly fat, also known as visceral,” says Butsch. If two people have the same BMI or body weight, “those who hold their weight in the middle, in the belly area” — the more apple-shaped people — “have an increased risk of developing metabolic diseases like diabetes, fatty liver disease, high cholesterol, and sleep apnea, compared to those who hold their weight in hips/thighs” — the pear-shaped people.

"Visceral fat is harmful, as it is located near the portal vein, which carries blood from the intestinal area to the liver,” Rifkin says. “However, most clinicians will look at BMI in general rather than shape of patient.”

"Belly fat contributes to insulin resistance, which can lead to diabetes,” Vecchio says.

Is some extra weight helpful for older adults? Shouldn't they have more cushion for falls?

"Being slightly overweight may aid in the older population as body fat provides energy storage, as appetite can decline with age,” Rifkin says. “Fat aids in keeping body temperature maintained as well as providing a protective layer to visceral organs."

Besser agrees. “If you're really overweight, your balance is more likely to be off, so I wouldn't recommend that as a cushion to bounce. No, that's not a reasonable idea. I don't want anyone to be too thin — being too thin isn't too good either…. You can't just say, ‘I'm older so I can carry more fat because I'm older.’ Nope, sorry. That's not gonna fly."

"There is some evidence that the disease of obesity provides protection in developing osteoporosis, mostly related to increased estrogen levels in postmenopausal women with obesity,” Butsch says. “However, this is not clear, as more is learned about the negative effects of obesity-related inflammation on bone metabolism."

What do you recommend for weight loss?

Rifkin says the recommendation for weight loss is one to two pounds per week, with exercise to ensure that what comes off is fat. “The issue with individuals over 50 years old is that they lose bone density, so lifting weights is a great way to avoid or decrease osteoporosis,” she says.

Vecchio cautions, “Before venturing on an exercise regimen, you should check with your physician and make sure you are not at risk for any cardiac events while exercising, particularly if you are a little older, and have not exercised previously."

Keep a food journal of everything you eat, Besser says, because people consume calories without even noticing.

"Don't diet, because diets don't work,” she says. “Diets are temporary. You may lose weight, but once you get off the diet, you're going to go right back and gain weight. I don't expect you to change everything overnight. That's a recipe for failure. But first you have to figure out what it is that you do, and then you work on it."

For example, change your route to work to avoid that fast-food joint that tempts you every day.

To maintain muscle, Butsch recommends eating around 15 grams of protein at each meal. He also generally suggests that people consume most of their food during morning or daylight hours, since our bodies are more fuel efficient then versus at night. For exercise, he recommends 150 to 200 minutes a week combined with some form of strength training two to three days a week.

"As we get older, we're more prone to losing muscle mass, and as we gain weight in our older years, we tend to gain more fat mass. So it's really important to try to maintain muscle mass,” he says.

More on Managing Your Weight