Getting older doesn't have to mean standing still 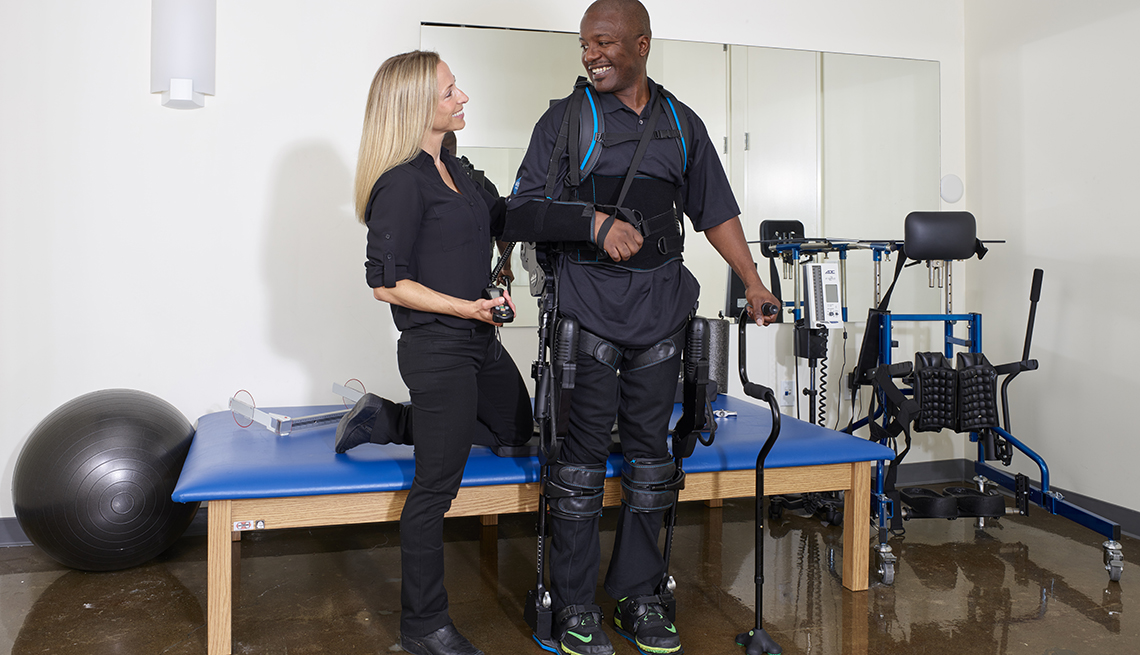 Stroke is the primary cause of long-term disability in the United States, affecting approximately 795,000 people per year, predominantly those over 65. At St. Mary Rehabilitation Hospital in Langhorne, Pennsylvania, as long as they are stable enough, patients can begin the process of movement retraining within days of suffering a stroke — in an exoskeleton.

Bulky, heavy and seemingly straight out of a blockbuster movie, the robotic harness isn't your average therapeutic device. Outfitted with a battery pack and motors in the joints, patients often invoke the film Robocop as they get used to the feeling of being enclosed by a therapeutic robot.

Yet exoskeletons are just one breed of cutting-edge technologies that are having real impacts on how older adults with mobility issues are able to get around — making it possible for more people to live fuller, more independent lives, both inside and outside the home.

St. Mary physical therapist Chrissy Colistro has been using the EksoGT exoskeleton as part of her practice since September 2018. Many of her patients are recovering from strokes, but she and her colleagues have also used the device with those grappling with other neurodegenerative conditions, including multiple sclerosis and Parkinson's disease.

Depending on the severity of a patient's impairment, the exoskeleton may initially do all or most of the work for the user. By monitoring sensors in the exoskeleton, therapists can adjust how much the metal harness compensates for each movement with the goal of retraining the muscles and nervous system.

Some initial fear on the part of patients is common.

"We get them into the device, and show them – look, you just took 75 steps, when they'd struggled to do 10 feet with the therapist, holding on to the wall, with a lot of physical help,” Colistro says. “There are challenges, but after they get to feel the proper movements after being in the machine, those movements carry over after they come out. That's the goal.”

Ekso devices are in use in over 270 rehabilitation centers worldwide, and the company says that over 115 million steps have been taken in their devices. But they're just one of many companies in the exoskeleton market; devices by four other manufacturers have earned approval by the Food and Drug Administration for use in therapy. Smaller wearables are also popping up; at Harvard, scientists are developing more pliable versions intended to be worn beneath clothing. Mind-controlled versions may even be common in the future.

Insurance companies are starting to pay attention, as well; earlier this year, Cigna announced it would consider exoskeleton coverage for spinal cord injuries on a case-by-case basis.

"I am often asked if everyone with mobility issues will have an exoskeleton at home at some point. The technology is not ready for that yet, the cost too high, so for now it is best suited for a rehabilitation setting,” said Jack Peurach, CEO and president of Ekso Bionics. “At the end of the day, our goal is create exoskeleton technology that augments human capability and allows people to rethink their current physical limitations."

Another technology being developed to help stroke patients and others with mobility challenges involves the video games your teens or grandkids seem so obsessed with. Companies like the Switzerland-based MindMaze are developing this technology to not only rehabilitate limb and fine-motor impairments, but to make the process downright enjoyable.

"We wanted to create a deeply enjoyable, immersive, joyous rehabilitation experience,” Krakauer says, noting that the new technologies use body sensors to help create customized experiences for each user.

Though scientists have been studying virtual reality games as a way to rebuild brain-body connections after a stroke, or from neurodegenerative conditions like MS and Alzheimer's, the technology has finally become affordable and powerful enough to be useful on a broader scale. Though a relatively new area of study, studies have shown that when properly targeted, the technology is more effective at upper-limb rehabilitation compared with conventional physical therapy, or no treatment. Such virtual reality for lower-limb rehab and gait retraining continues to develop.

Virtual reality is also enabling a different kind of movement for people who are home-bound: virtual travel. Boston-based Rendever's concept involves networked VR headsets, so groups of adults can “travel” together to different destinations — or share bucket-list adventures like hot-air ballooning or diving with dolphins.

Robotic companions for older people are another buzzy trend in the tech world — robotic dogs, cats, even humanoids for staving off loneliness. But Columbia University's Sunil Agrawal wondered if a robot companion could also provide another important service: being nearby for a stabilizing touch.

Agrawal's robotic cane is an autonomous robot — it follows users along automatically, maintaining a comfortable but reachable distance. Agrawal said he observed that many older adults have no real trouble walking, but that a bit of extra touch helps them feel stable and oriented.

"You often see older people walking and holding hands — not for physical support, but for a sense of touch that gives them information about where they are,” Agrawal said. “The idea behind the cane is to provide feedback about where you are in space, to help you balance yourself."

Though the device is still undergoing testing in the lab — a recent study showed it helped users narrow and stabilize their strides — Agrawal said there is growing interest in creating a new generation of “smart” assistive devices like these.

"It's not intrusive – it's something that walks next to you, and you take its help as you need it,” Agrawal said.

Gait itself is an important area of study – and changes in gait have been shown by hundreds of studies to be an early predictor of various age-related cognitive declines, as well as individuals who may be at higher risk of falling. Small, inexpensive sensors are one tool now being used to identify people at risk of fall, or in the very early stages of neurological disorders.

A wearable foot pod sensor and software package developed by a company called GaitUp aims to be such an “early warning” device that can detect minute shifts in gait over time, and perhaps signal when a hidden cognitive shift is afoot. Similar to a smartwatch that passively monitors vital signs and daily activity, GaitUp's device attaches to a shoe, and is being used in 20 hospitals around the United States.

"If we look at neurological disorders, gait variability is an early sign of Parkinson's,” said GaitUp CEO Benoit Mariani. “If this can be measured in an accurate and objective way, that helps doctors not only diagnose the pathology, but also evaluate the efficacy of a treatment.”

Explore your world through augmented and mixed-reality technology