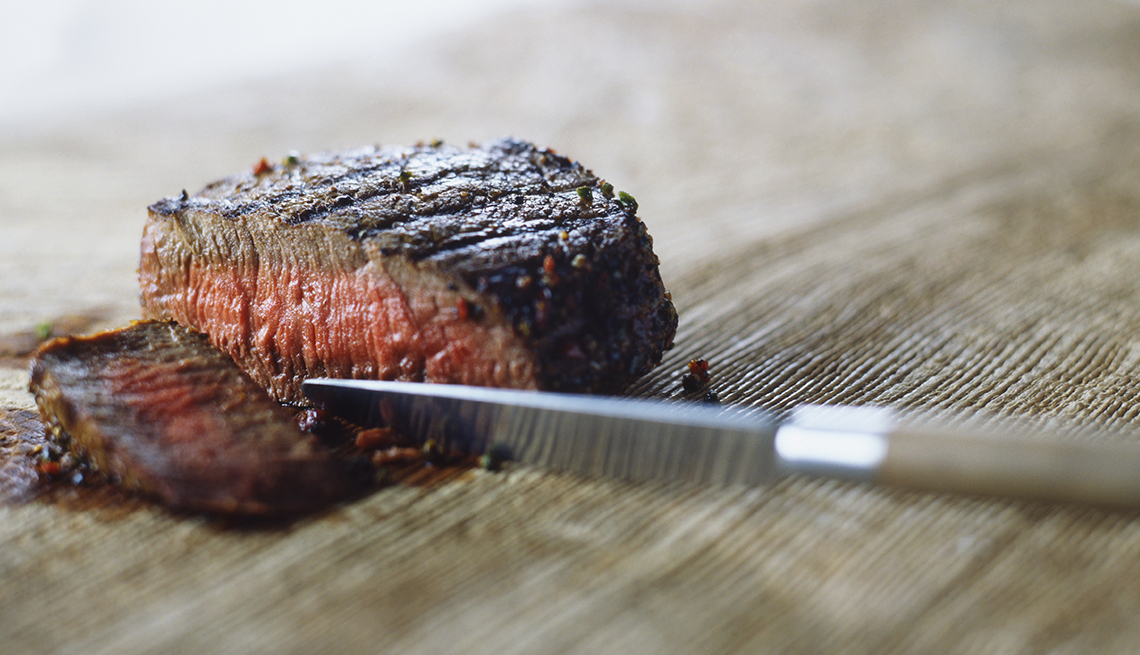 En español | Many nutrition experts make a point to not demonize any particular type of food. But let's get real — if you're eating for health, there's less room on your plate for some foods than others. With evolving nutrition science and conflicting messages about what's healthy and what's not, it can be a challenge to figure out which things you'd be better off skipping. We took a close look at some of today's most feared foods to figure out what you need to know.

You've probably heard that too much meat — especially red meat — is not good for your heart. But as the meat-heavy paleo and keto diets have grown in popularity, it's become hard to avoid people piling their plates high with (bunless) burgers and bacon in the name of good health.

The research on meat and health, however, suggests we stay cautious. When healthy adults upped their red meat consumption by as little as a half serving per day over an eight-year period, they were 10 percent more likely to die prematurely over the next eight years compared with people who hadn't increased the amount of red meat they ate, according to researchers at Harvard School of Public Health who tracked the diets of more than 80,000 adults. Cutting back on red meat, while eating more foods like nuts, fish, poultry without the skin, eggs, whole grains, or vegetables, however, was linked with lower risk of death. In other studies, cutting back on processed meats such as bacon and sausage has been shown to notably lower mortality risk.

As for the presumption that white meat is always healthier, it may not be — at least when it comes to your cholesterol. When healthy men and women ate diets focused on red meat, white meat or non-meat protein for four weeks each, their LDL and total cholesterol were equally elevated after both meat diets — and higher than after the non-meat weeks — according to research published in the American Journal of Clinical Nutrition. In other words, there was no cholesterol-lowering benefit to white meat over red.

Skip it? “Protein is important, but a little goes a long way,” says Joan Salge Blake, a clinical associate professor of nutrition at Boston University. If you do choose meat as your protein source, remember that three ounces — around the size of a deck of cards — is one serving. And be sure to choose plenty of other proteins such as fish and plant-based foods like beans and tofu throughout the week as well.

The average American eats the equivalent of 17 teaspoons of added sugar per day, according to U.S. government data — that's around double the limit suggested by the American Heart Association (the AHA recommends men cap their intake at 9 teaspoons per day; women a mere 6). Even if you're not in the habit of pouring it into your coffee or using it to doctor up your morning oatmeal, you may still be taking in more sugar than you think. Much of the added sugar in our diets is hidden in unexpected foods like cereals, yogurt, bread and tomato sauce, say experts.

Unfortunately, the white stuff isn't so sweet when it comes to your health. People who ate 25 percent or more of their daily calories from added sugar were twice as likely to die of heart disease over a 14-year period compared with people who ate less than 10 percent of their calories from sugar, according to a 2014 Centers for Disease Control and Prevention study published in JAMA Internal Medicine. And don't assume you're off the hook if you are at a healthy weight — the risk remained regardless of people's size.

Skip it? When it comes to sugar, less truly is more. “Americans have a sweet tooth, and we are consuming too much,” says Salge Blake. There's no reason not to cut back as much as you are able. Keep in mind that sugar can go by many names: Rice syrup, high-fructose corn syrup, sucrose, even honey, molasses and agave nectar count toward that daily limit. As of 2021, the government will require companies to disclose on nutrition labels the amount of added sugar per serving; for now look on the ingredients list for versions of your favorite foods that don't use any added sugar. Need a sweet fix? Fruit — natural sweetness packaged with fiber and valuable nutrients — is your best bet.

Images of those “amber waves of grain” have long been associated with farms, harvest season and all-natural eating. But in recent years, wheat has gotten a bad reputation, with about one-third of American shoppers saying they're trying to avoid or cut back on gluten, the proteins found in wheat. Detractors blame it for everything from digestive woes to joint pain to “brain fog."

But many experts say there's no evidence that wheat is a problem —unless you fall into a minority of people who have trouble processing it. “If a person has celiac disease or a gluten sensitivity, they need to avoid grains like wheat, barley and rye, which contain gluten, as well as foods made using these ingredients,” says Salge Blake. The only treatment for celiac disease, for instance, is a 100 percent gluten-free diet. If you suspect you have a problem with wheat, talk to your doctor about getting tested.

Otherwise, grains can play an important role in your diet, especially if you choose the less processed whole grains like whole wheat. Whole grains are a valuable source of fiber, which about 95 percent of Americans don't get enough of, and other nutrients in the diet. Eating around three servings of whole grains per day was linked with lower risks of heart disease, stroke and cancer, according to a 2016 study published in the journal the BMJ.

Skip it? Not unless you have a reason to. But, you may want to mix up servings of whole-wheat-based foods such as bread and pasta with other whole grains, including brown rice, barley and quinoa, for a bigger variety of nutrients.

In the late 1960s, scientists began suggesting that cholesterol in the diet contributes to the development of heart disease. Recommendations from the American Heart Association followed suit, limiting healthy individuals to no more than 300 milligrams of cholesterol per day — and no more than three eggs per week. The U.S. government later created similar guidelines.

It turned out, however, that much of the research didn't actually support the idea that cholesterol in the diet increases cholesterol in the blood — or that either was connected with the risk of heart disease. As science continued to refute this belief, things started to change. With the 2015–2020 Dietary Guidelines for Americans, the federal government lifted its recommendation on restricting dietary cholesterol.

Eggs have even developed a healthy reputation, depending on whom you ask. Eating them for breakfast, for instance, was associated with better satisfaction, improved blood sugar response and consuming fewer calories later on when compared with a cereal-based breakfast, according to research from the University of Minnesota. Other studies link eggs with improved satisfaction throughout the day, without impacting cholesterol levels. In the U.S., egg consumption is now at the highest it's been in years, with each person eating about 287 eggs per year, compared with 230 in the mid-1990s.

The great egg debate was recently rekindled when a large study published in JAMA linked eating more eggs with increased risk of heart disease and premature death. Many experts feel, however, that the research should be taken with a grain of salt for a number of reasons, most notably that it is in conflict with other, more extensive and well-designed studies.

Skip it? “Up to an egg a day, as a part of a heart-healthy diet that is low in saturated fat, is a reasonable recommendation for healthy individuals,” says Salge Blake. Some experts even suggest that older people add eggs to their diet as an inexpensive protein that is a good source of leucine, an amino acid that can help prevent the muscle loss that is common as we age. If you're at a higher risk for heart disease or have high cholesterol, meet with a registered dietitian nutritionist (RDN) for personalized, research-based advice on what to eat.

If you've been in a grocery store recently, you've probably noticed the abundance of plant-based dairy products. Maybe you're even using almond milk in your cereal, or opting for oat milk when you get coffee. The non-dairy milk category has grown 61 percent since 2012, according to research firm Mintel.

And while there are perfectly good reasons to choose nondairy milk — you're looking to live a more plant-based lifestyle, you have a dairy allergy or intolerance, you just plain like the taste of it — there's also plenty of evidence that regular dairy foods can be beneficial. Eating more dairy foods, especially yogurt, was linked with lower risk of type 2 diabetes in a 2015 Spanish study of older adults, for instance. And a 2015 review of 22 studies found that eating low-fat dairy and cheese was associated with decreased risk of heart disease and stroke.

Skip it? It's not necessary. Dairy foods are an excellent source of calcium, vitamin D and potassium, which are nutrients many Americans are falling short on, says Salge Blake. “If you choose non-dairy alternatives, choose ones that don't have added sugars, and make sure you are getting adequate amounts of these three nutrients elsewhere in your diet,” she says.

Rachel Meltzer Warren is a registered dietitian, nutritionist and writer based in Jersey City, NJ.