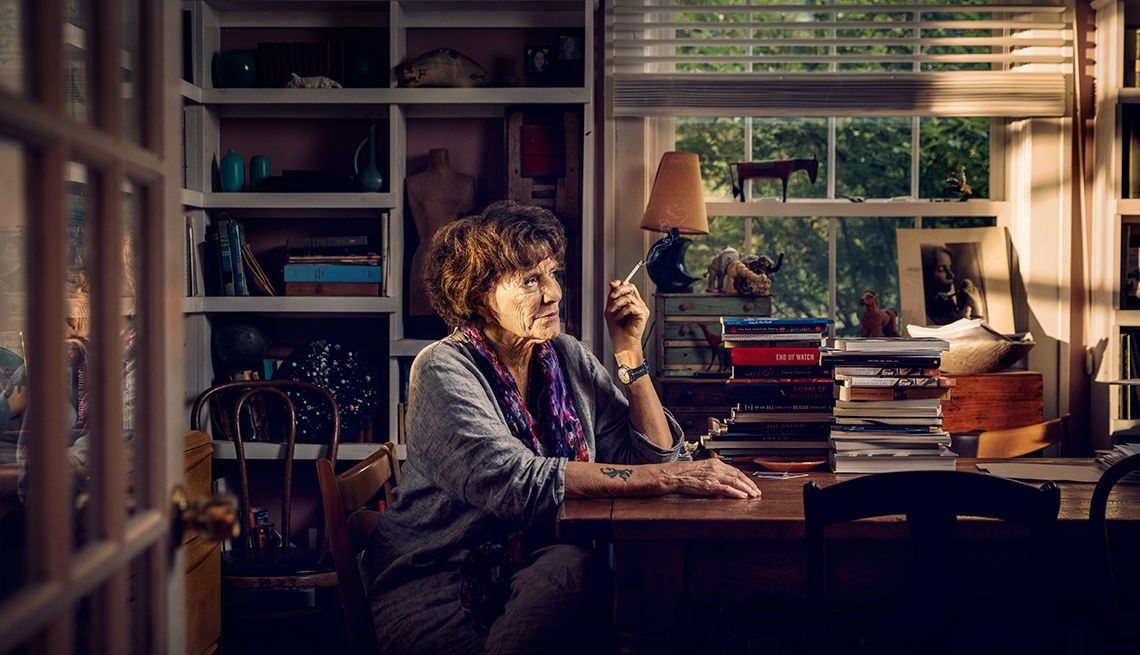 Author Abigail Thomas at her home in Woodstock, New York.

I'm 74, and I hadn't ever broken anything before I broke my wrist. Foolishly, I'd stood on a chair to hang new curtains. Getting up was easier than I'd thought, but getting off was even easier: I fell. It was such a short trip to the floor that I had no time to worry. What I remember was a sort of fleeting what now? I heard two tiny snaps as I landed, which turned out to be the sound of my wristbones breaking. It hurt like hell. I found that the only way to ease the pain was to lay my right hand on a pillow and carry it around as if I were a waiter with a tray of martinis. Then I called my friend Chuck, who came right over and took me to the emergency room.

My cast, my numb and swollen fingers, my inability to perform any daily task, were all humbling. I won't even begin to talk about the pain. I couldn't drive, I couldn't cut anything harder than soft butter, which I couldn't spread on toast. I couldn't even hold a cup of coffee. Still, it was a brand-new experience, and new experiences are hard to come by at my age. I was oddly grateful.

Then, two weeks after my cast came off, my other wrist broke. I'd leaned against a door, which opened unexpectedly, and I fell through. My friend Paul drove me for the X-rays, which showed two bones broken, and I received another cast.

When I came home, I found a bird in my bedroom — a bird the size of a tiny teacup, fluttering about. Its presence was almost more alarming than the fact that I'd broken both wrists inside of a month (something I found almost funny). I'd no idea how it got in, but one of my bedroom doors opens on the yard, and with the help of my friend Claudette, we got it unlocked and then closed the other door, which leads to the rest of my house. I peeked in after a few minutes and the little thing was standing on the edge of my bed, two feet from freedom. I tiptoed away, made a cup of coffee (which I could now hold), and when I returned, the bird was gone.

What did it signify? I'd heard that a bird in the house is a portent of death. I hadn't finished figuring out my will yet and wanted to have that done before my appointment with the lawyer, which gave me until Jan. 4, and it was already December. Falling again became both a fear and a certainty. My kids threw out all my shoes and made me buy new ones, with rubber soles, yet I soon tripped and fell on flagstones. Nothing further broken, but mortality is less concept and more reality these days. Happily, I noticed a spot of bird droppings on my sheet and felt better. It was almost cute, this dime-size dot of poop. It seemed to portend good luck.

My hands looked as if they belonged to someone else. I was used to wearing a dozen rings; they had to be cut off. I kept them in a jar. The fingers were crooked on my left hand, my right hand kept seizing, and I couldn't make a fist with either one. Both wrists ached, though almost pleasantly, serving to remind me that I was still here. I could live with this. I could live with this for the rest of my life, if necessary. The hardest chore would be pulling my blankets off the floor, where they inevitably wind up after the dogs crawl out from the covers. I had no idea what winter blankets weighed.

Then one night, after I'd turned out the lights and was lying in bed with my dogs, I heard a door close. Nobody lives here except me and the dogs. So I switched on the light and got up to check, but all was as I'd left it. The next night it happened again, the distinct sound of a door being closed. One of my dogs hopped out of bed and gave a halfhearted bark. Again, all was as I'd left it. I said what I'd heard you were supposed to say when your house is haunted: "This is my house now, and you must leave."

It was with some trepidation that I hit the sack the third night, but the house remained quiet. I would soon be on the mend, my right hand getting better as the cast on my left was removed.

So what to do with two broken wrists, a bird in my bedroom and the sound of two doors closing? I am a writer, and I keep thinking there must be a connection to make, that these are pieces of a puzzle, that there is some way everything fits together. I'm damned if I know what it is. The more I squirrel around for a meaning, the more reluctant I am to consider the obvious. But the significance of a closing door is not lost on me, and I've never felt quite this mortal. It's a beautiful word, "mortal," rhyming with "portal," which sounds optimistic. And really, who wants to live forever? How tedious life would become. Mortality makes everything matter, keeps life interesting. And that's all I ask.

Abigail Thomas, 74, is the author, most recently, of What Comes Next and How to Like It: A Memoir.