En español | Ready for a new workout that will strengthen your heart and other muscles without breaking down your body? You might want to try a "sprint triathlon," an increasingly popular athletic challenge for the 50-plus set. 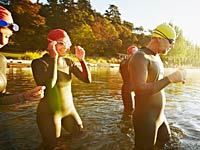 Need a challenge? Try a mini-triathlon!

The sprint tri — affectionately dubbed a mini-triathlon — typically includes a half-mile swim, 12-mile bike ride and three-mile run, in that order. Distances vary depending on the race and course.

Bob Wendling, president of USA Triathlon, says the numbers of older athletes competing in sprint triathlons have "absolutely exploded in the last six years." He estimates 50,000 people older than 50 are now competing in at least one sprint triathlon a year, a tenfold increase since 2005.

The appeal? Cross-training — which involves several different forms of exercise — is terrific conditioning, and sprint triathlons are far easier on the body than races with longer distances. Also, the competitions usually are friendly and social, says Jim Rutberg, a coach with Carmichael Training Systems in Colorado Springs, Colo. "There is this wonderful community," he says.

Wendling says sprint triathlons are ideal for those who are in relatively good physical condition and are ready for a new challenge.

"People over 50 have a tendency to do shorter events, just because the longer ones take so much time training and they're harder on your body," he says. Races can be as short as a 400-meter swim, eight-mile bike ride and one-mile run. To get started, Wendling recommends setting a three- to six-month training schedule — increasing distances no more than 10 percent a week — and checking in first with a doctor.

According to Rutberg, a "moderately trained athlete has the condition necessary" to compete in a sprint tri. Because the swim is often the most intimidating component, he suggests that first-time competitors look for a sprint triathlon with a pool swim rather than an open-water swim. "That tends to help, because you don't have the washing machine effect of 100 people in the water at the same time," he says.

For Joli Regos, the swim was definitely the most daunting aspect of the mini-triathlon she wanted to enter in Green Valley, Ariz. This event has an 18-mile bike ride, a two-kilometer fast walk and a 50-meter swim. Although the athletic 75-year-old biked on 50-mile rides well into her 60s, she had never learned to swim.

"The place in Hungary where I grew up had no bodies of water close by, so I never learned," she explains. Always ready for a new challenge, Regos learned to swim in order to enter the event, part of the Green Valley Senior Games.

"I won it," she says, chuckling, "but I have to tell you I was the only one who signed up in my age group." Although there were plenty of competitors in their 60s and 70s, she was the only one over 75.

Catherine Mallette of Baltimore, 51, who has competed in 10 sprint tris since 2010, says the exhilaration of finishing is addictive. She agrees with Rutberg that the other competitors are "wonderful and supportive" and that the race organizers "treat you like a rock star."

Recalling a race in June, she says, "When men get passed by women in a triathlon, they call it 'being chicked.' I got passed by a 71-year-old woman, and I call it getting inspired."