Women who drink a couple of sugary soft drinks a day — even if they don't gain weight — have a greater chance of developing conditions that can lead to heart disease and diabetes. 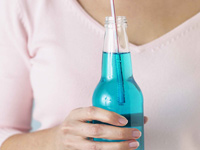 Stay away from sugary drinks to decrease your chance of getting heart disease or diabetes.

In a study presented at American Heart Association Scientific Sessions 2011 in Orlando, Fla., this week, researchers compared data from middle-aged and older women who drank two or more sugar-sweetened drinks a day with data from women who drank one or none. Those whose daily intake included two or more carbonated sodas or sports drinks with added sugar were nearly four times as likely to develop high triglycerides — fat particles in the blood, which can increase the risk for heart disease. They also were more likely to have blood sugar levels that indicate pre-diabetes. Both of these are risk factors for heart disease and diabetes.

In addition, the women who drank sugary beverages were significantly more likely to have an expanding waistline. The researchers did not find the same associations in men.

Generally, women have smaller bodies than men and therefore require fewer daily calories, says epidemiologist Gregory L. Burke, M.D., of Wake Forest School of Medicine in Winston-Salem, N.C., the paper's senior author. "Thus, the calories from sugar in a sugar-sweetened beverage represent a larger portion of daily caloric intake in women." And each extra calorie not burned off counts more toward extra weight and the risk of heart disease and diabetes.

"The strongest evidence about sugar-sweetened beverages shows an association with weight gain, which certainly raises the risk for developing these diseases," says Christina Shay, lead author and a cardiovascular epidemiologist at the University of Oklahoma Health Sciences Center in Oklahoma City. "But among women who drank two or more sugary beverages a day, we found an increase in risk factors even if they didn't gain weight. So there may be something about the way sugar-sweetened beverages are metabolized that influences cardiovascular risk."

The research looked at more than 4,100 adults ages 45 to 84 participating in the Multi-Ethnic Study of Atherosclerosis, which involves men and women from six communities across the country. None had heart disease at the start of the study. The researchers monitored risk factors such as weight gain, increases in waist circumference, cholesterol levels and glucose over five years, starting in 2002.

What they found was that women who drank two or more sugar-sweetened beverages a day tended to have higher triglyceride levels, a higher risk of diabetes "and perhaps a slightly larger pants size," says endocrinologist Robert H. Eckel, M.D., of the University of Colorado Hospital, who was not involved in the study. " Is it just those extra nondiet sodas, or could it be other lifestyle habits?" asks Eckel, past president of the American Heart Association. "Perhaps the common-sense approach would be to cut down on sugar-sweetened drinks."