En español | Belt-tightening isn't the only thing older workers are doing to deal with a tough job market. A record number of men are also choosing to undergo a little face-tightening to help them find jobs or compete with younger workers.

See also: Will plastic surgery save your job?

Face-lifts for men rose 14 percent in 2010, and Botox injections increased 9 percent, according to the latest figures from the American Society of Plastic Surgeons. More men also chose skin fillers to smooth out creases and wrinkles, as well as liposuction for love handles.

"Face-lifts are on the rise among male patients 55 and older," says ASPS president Phillip Haeck, a plastic surgeon in Seattle. "Many men say they don't look as young as they feel, and they want to change that."

A case in point — Joe Marek, 57, a software engineer in Laurel, Md. He exercised, watched what he ate, liked to take active, outdoorsy vacations in places like Costa Rica, and generally thought of himself as a fit, energetic guy. Except when he looked in the mirror.

"I was getting that drooping of the eyes, a little turkey neck. And people would tell me I looked tired when I wasn't," he recalls.

He didn't want to look 20 years younger, he emphasizes, "I just wanted to look like I felt."

So last year, Marek got a face-lift. And an eye-lift.

The result, he says, made him look "refreshed."

"People would say to me, 'You look different. Did you get a haircut? Shave your mustache?' Other people, who I haven't seen in a while, didn't recognize me."

His girlfriend, whom he met before he had the face-lift, "was really excited. She likes it quite a bit."

Investing in a new look

Marek's plastic surgeon, Stephen Baker, M.D., of Georgetown University in Washington, says Marek is typical of a lot of the older men he sees in his practice, including those retiring from the military who want to start a second career and consultants anxious to stay on top of their game. "I get a lot of professionals who are hitting their prime and want to work into their 70s. They feel good about themselves. They're healthier because of modern medicine, and they want to look in the mirror and see that vitality," Baker says.

For Haeck, many of his West Coast patients are boomers looking for jobs or competing with younger workers in the workplace. "Baby boomers don't want their looks hindering the job search," he says. And as the recession loosens its grip a bit, "many men are investing in themselves to attack the job market."

Next: Is cosmetic surgery worth the money? >>

Of course, that investment can be substantial. The average surgeon's fee for a face-lift is more than $6,200, according to annual data from the plastic surgeons' association. Factor in other costs like anesthesia and a hospital stay, and a face-lift could easily run $10,000 — a tab not covered by most insurance policies because it's considered elective surgery.

Obviously, many men think it's worth it. It also helps that they're becoming less embarrassed about doing things to enhance their appearance. Baker says his practice traditionally has been about 80 percent women, 20 percent men. "But in the last year, it's become almost 40 percent men, 60 percent women." 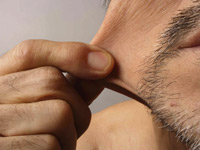 Not every male patient needs a face-lift, he adds. "For men, sometimes it's just some Botox or fillers to get rid of that angry expression" — the furrow between the eyebrows that can make a person look mad or hostile.

Baker also suggests that men consider improving puffy eyes or sagging necks. "Bags under the eyes can make you look tired. That puffiness is fat that's pushed forward because the tissue has gotten looser. If I had to pick one thing, the lower eye lids make the biggest difference."

For those who are thinking of a face-lift, Baker says it's not about looking "overdone, like Kenny Rogers. It's about looking a little more youthful and rested."

Jennifer Kalita of Silver Spring, Md., a market consultant specializing in adults over 50, isn't surprised by the growing trend in male plastic surgery.

"A lot of boomer men don't want to think about retirement. They say, 'I feel like I'm at the top of my field, yet they're going to hire someone at half my salary. How can I compete?'"

Older men are also dealing with other midlife transitions, she adds, including sleep problems, erectile dysfunction, even online dating.

Kalita advises that before choosing plastic surgery, men "think about the transitions you are going through and acknowledge the changes going on. Look at your sleep and nutrition and make sure you're doing all you can to take care of yourself."

And "Don't just have plastic surgery because you feel it's all you can do," she adds.

These are the fastest-growing surgical and minimally invasive procedures for men from 2009 to 2010, according to the American Society of Plastic Surgeons.