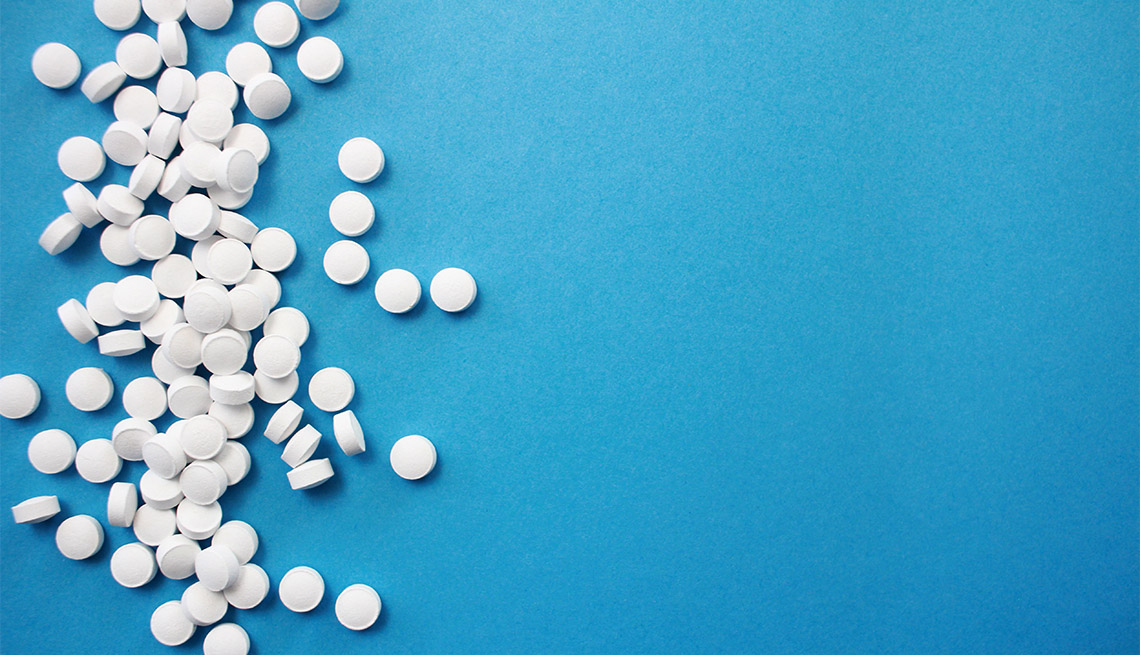 En español | More than half of all adults between the ages of 45 and 75 report taking an aspirin every day, according to a 2015 study published in the American Journal of Preventive Medicine. And for years doctors have recommended an aspirin a day for otherwise healthy older adults to help keep heart attacks at bay. Within the past year, however, the thinking has changed dramatically, says Leslie Cho, M.D., section head for preventive cardiology and cardiac rehabilitation at the Cleveland Clinic.

“The trials that established aspirin for primary prevention were done way before we had high-potent medications to help lower cholesterol, like statins,” she explains. “Now, newer research shows that the risks for most people probably outweigh the benefits.” A study funded by the National Institutes of Health of more than 19,000 people over age 70, published last year in The New England Journal of Medicine, found that a daily aspirin didn’t reduce the risk of heart attack, dementia or stroke but did increase rates of GI bleeding by an alarming 38 percent. And earlier this month, the American College of Cardiology published new guidelines recommending against routinely giving aspirin to older adults who don't have a history of heart disease.

But there are still some people who need to take an aspirin every day. “Patients have been calling nonstop over the last week, confused as to whether or not they still need to take their aspirin,” says Nieca Goldberg, a cardiologist at New York University and director of the NYU Langone Joan H. Tisch Center for Women's Health. Here’s what you need to know.

Do take a daily aspirin if you’ve already had a heart attack or stroke or have existing heart disease. “In these people there’s clear evidence that it significantly lowers their risk of a second cardiovascular event,” Goldberg explains. This is because aspirin is an antiplatelet medication, which means it prevents your platelets from clumping together and forming blood clots that can trigger a heart attack or stroke. You also need aspirin if you already have heart disease. “You may not have been hospitalized for heart surgery, for example, but if you’ve had a coronary calcium scan and there’s plaque in your arteries, then you’re considered to have heart disease,” she says. In these cases you’ll still benefit from aspirin.

Don't take a daily aspirin if you’re over 70 and don't have heart disease (including a past heart attack or stroke). People in this group have a much higher risk of GI bleeding than younger individuals, says Cho, so it’s not likely that they’ll see much benefit. A 2017 study published in The Lancet found the risk of potentially life-threatening GI bleeding was highest in those over age 75.

Do consider a daily aspirin if you’re between the ages of 40 and 70 and have clear risk factors for heart disease. This includes anyone who is having a hard time getting blood pressure or cholesterol under control, even with medication, or has poorly controlled diabetes, Cho says. You may also want to consider regularly taking aspirin if you have a very strong family history — that means having a father, grandfather or brother who was diagnosed with heart disease before age 55, or a mother, grandmother or sister who was diagnosed before age 65. “You’re not at increased risk if your mother had heart disease at age 80 — that’s just due to old age,” Cho notes.

Don't consider a daily aspirin if you have a history of GI bleeding or a history of ulcers, even if you have some of the above risk factors. You and your doctor should look at other ways to lower your heart disease risk, says Cho, like weight loss, a healthy diet, and keeping other conditions, such as high blood pressure or diabetes, under control.

If you are already taking aspirin (or are considering starting it), there are steps you can take to reduce the risk of GI bleeding, Cho adds. These include taking a coated aspirin, which is less likely to cause stomach irritation and thus trigger a bleed, and always taking the drug with a meal or a hearty snack. To further limit risk, your doctor will usually recommend taking the lowest dose possible, which is usually 81 mg. You should also limit your use of ibuprofen and other nonsteroidal anti-inflammatories (NSAIDs), as these can increase stomach bleeding. (If you must take one, check with your physician first — most recommend waiting at least two hours after you’ve taken an aspirin.) It’s a good idea to avoid supplements that increase your bleeding risk, such as omega-3 fatty acids (fish oil) and evening primrose oil.

If you notice symptoms of a GI bleed — namely, black, tarry bowel movements or blood in your stool — see your doctor immediately. If you’re taking aspirin daily, Cho says, your physician should be running periodic lab tests on you to check for bleeding, including tests for anemia.

More on Drugs and Supplements