The question for researchers was, which of two drugs used to treat the leading cause of vision loss in older adults does the better job — Avastin or Lucentis? The answer, after a two-year study: They're equally effective. 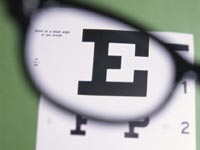 The study, which followed 1,185 patients at 43 medical centers across the U.S., found that both Avastin (bevacizumab) and Lucentis (ranibizumab) produce similar improvements in vision in adults with the wet form of age-related macular degeneration (AMD), a deterioration of the portion of the retina responsible for central vision.

Wet AMD occurs when blood vessels behind the retina grow and leak fluid and blood. The drugs, which are injected into the eye, block the vessels' abnormal growth.

The study divided subjects into four groups that used either Lucentis or Avastin monthly, or as-needed.

"We knew the drugs were effective in the short-term," said Maureen Maguire of the University of Pennsylvania's Center for Preventive Ophthalmology and Biostatistics, one of the centers involved in the study. But researchers wanted to test the drugs'  long-term use, especially because AMD requires repeated treatment to prevent loss of vision.

The results showed that treatment for two years with either drug resulted in similar levels of improvement. "The impact on vision is virtually the same, no matter which drug is used," Maguire said.

Researchers also found that monthly injections produced more improvement in patients' vision than taking either drug on an as-needed basis. "It was a small but real difference," said Maguire.

The study did find that there were different changes within the eye, depending on which drug was used, which might eventually impact vision. For example, Avastin left more fluid in the eye and Lucentis caused some retinal atrophy by the second year, Maguire said. Longer follow-up could determine whether these changes might take a toll on vision.

The study's results are particularly good news for patients' pocketbooks, said Ron Afshari Adelman, M.D., of Yale School of Medicine and director of Yale Retina Service. Avastin, approved for treatment of some cancers but used off-label for AMD, costs around $30 to $50 per dose. Lucentis, on the other hand, is about $2,000 per injection, "the single largest medication expense for Medicare, based on 2010 data," said Adelman.

"Patients and physicians sometimes think if something is more expensive, it must be better," he added. "This study showed the two are the same."

The study was funded by the National Eye Institute and published in the journal Ophthalmology.