10 Surprising Causes of Back Pain 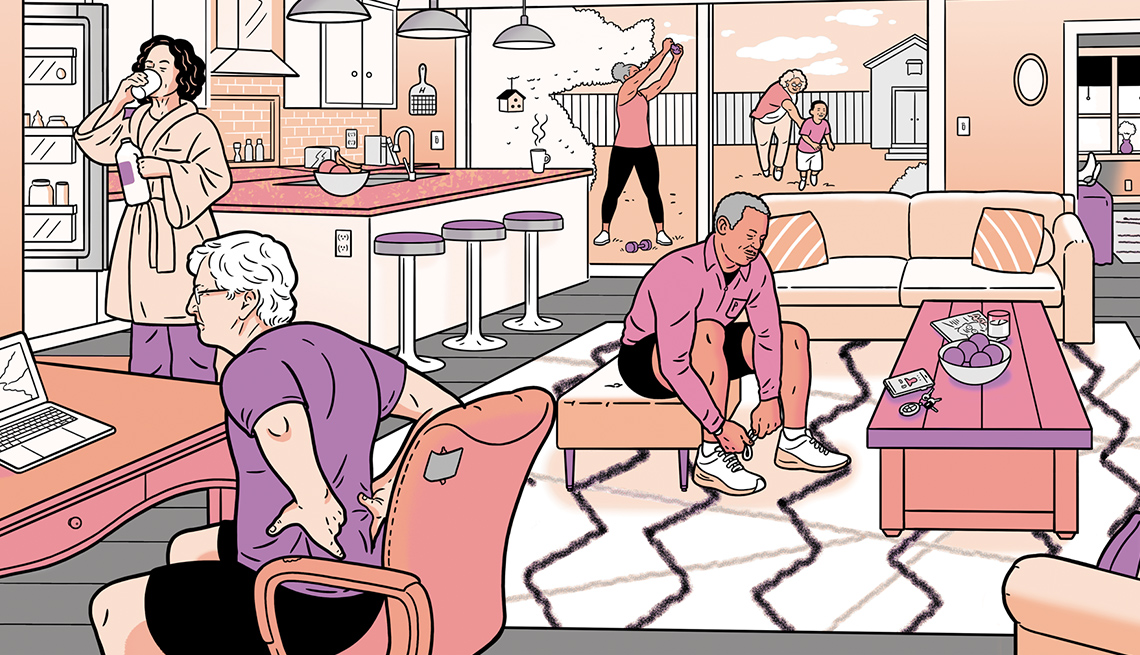 Illustration by Kyle Hilton
By

If an aching back is starting to feel more like a regular thing — and less like something you randomly pulled at the gym — well, you’re not alone. About 6 million older adults in the U.S. live with chronic lower back pain. In a 2019 survey by the National Center for Health Statistics, almost 46 percent of adults 65 and older said they experienced back pain in the past three months.

“As we get older, we start to lose fluid in our discs,” explains Gbolahan Okubadejo, M.D., an orthopedic spine surgeon with the Institute for Comprehensive Spine Care. As we lose fluid, the discs tend to collapse, “we get stiffer, and the risk of injury becomes greater,” he says. From there, plenty of lifestyle habits raise your risk. Some of these — hoisting your grandkid or overdoing the gardening — are obvious, but some aren’t.

Here are 10 surprising culprits that may play a role in the pain in your back. 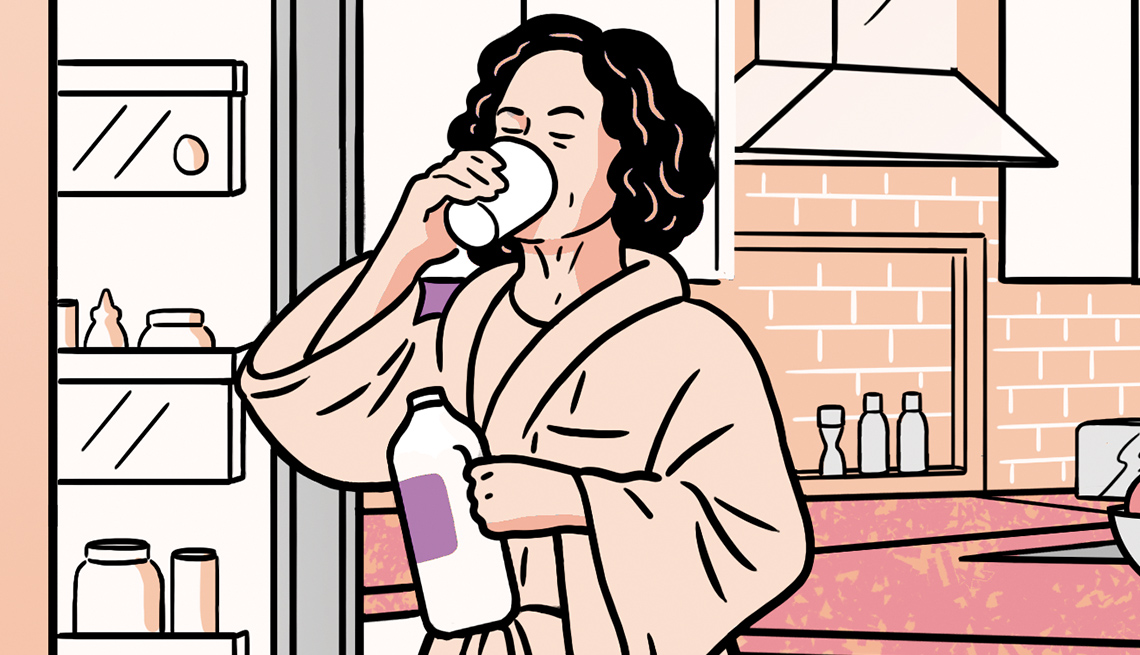 It’s not the milk per se, but the vitamin D it comes with; some studies have found that those with the most severe back pain had the lowest levels of vitamin D.

The vitamin’s effect on bone health could help explain the connection. Research in the journal Menopause found that among postmenopausal women considering spine surgery, those with severe vitamin D deficiency had more severe disc degeneration and back pain. Stronger bones can help protect against back pain and other disabling issues. Consult your physician about your vitamin D levels, says A.N. Shamie, M.D., professor and chief of spine surgery at the David Geffen School of Medicine at UCLA.

2. Your core is weak 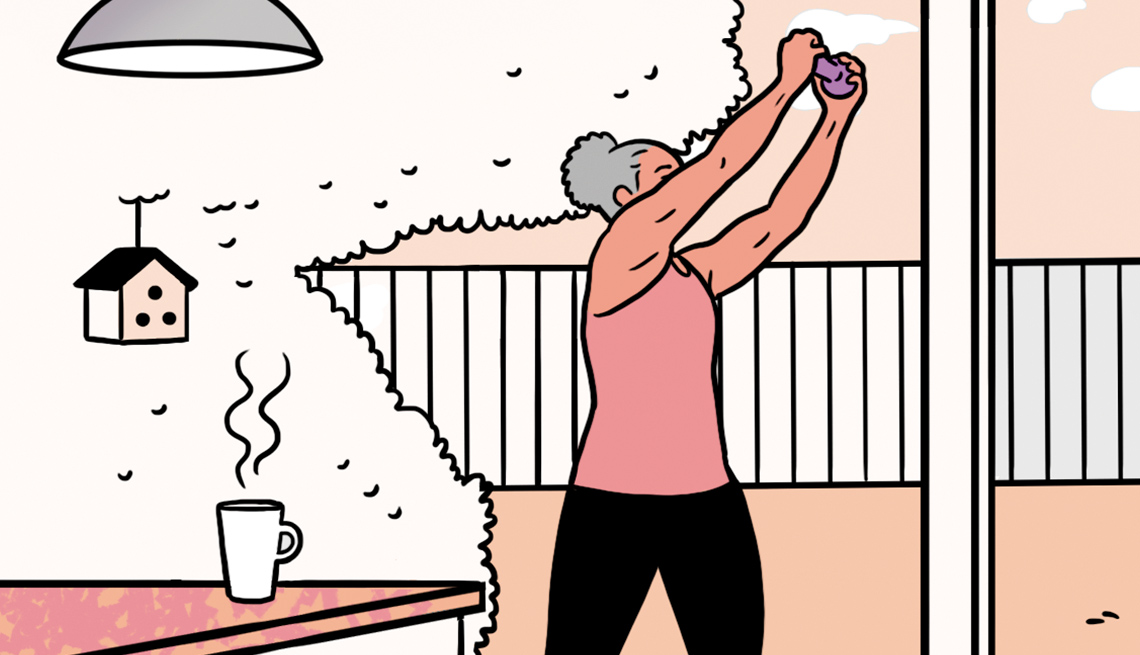 The muscles in your midsection make up the “core,” says physical therapist Karena Wu of ActiveCare Physical Therapy in New York City. A weak core can mean chronic back pain.

To help build strength, sit or stand straight, imagining that there’s a string attached to the top of your head, pulling you upward. Now tighten your abdominal muscles, trying not to move your pelvis, ribs or shoulders. Hold that position for as long as you’re comfortable.

3. You have a new grandchild 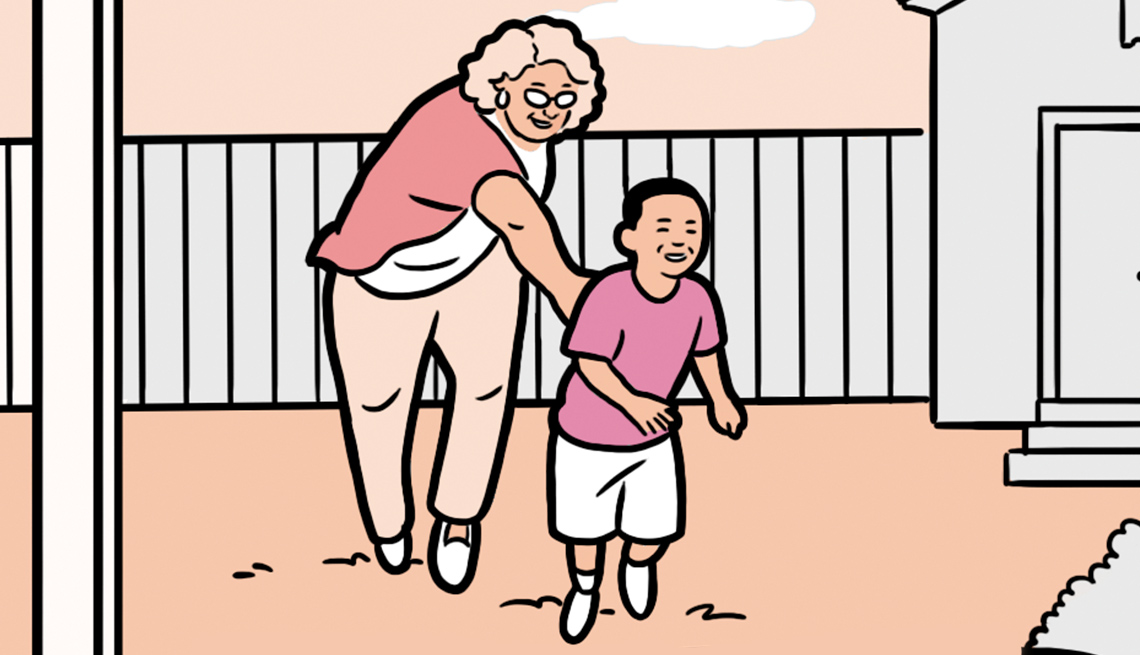 They’re delightful — and heavier than they look. If it’s been a while since you lowered an infant into a crib or picked a toddler in mid-tantrum off the floor, you might be feeling it in your lower back.

When lifting a baby, widen your base of support by spreading your feet a little apart and bringing your center closer to the ground. Be sure to hold small children close to you when you move them from the floor to crib or from the ground to a car seat, says physical therapist Matthew Minard, owner of Human Movement Optimization in Charlotte, North Carolina. “Imagine there’s a circle around your feet and stay within that zone,” he says.

Even during sleep, your body can recognize when there’s too much light in your bedroom. Your heart rate increases, and your quality of sleep suffers. And there’s a clear association between poor sleep and back pain. Sleep helps our muscles to relax and get rid of lactic acid buildup, Shamie says. Plus, sleep deprivation heightens your sensitivity to pain.

Rest keeps discs in good condition. The jelly-like core of a normal, healthy disc is 80 percent water, Shamie says. When you lie down to rest, your discs can refill for the day ahead. This gets more important as we get older and our discs become drier. To fight the light, get blackout shades and ban digital devices from the bedroom.

5. You sit and sit some more 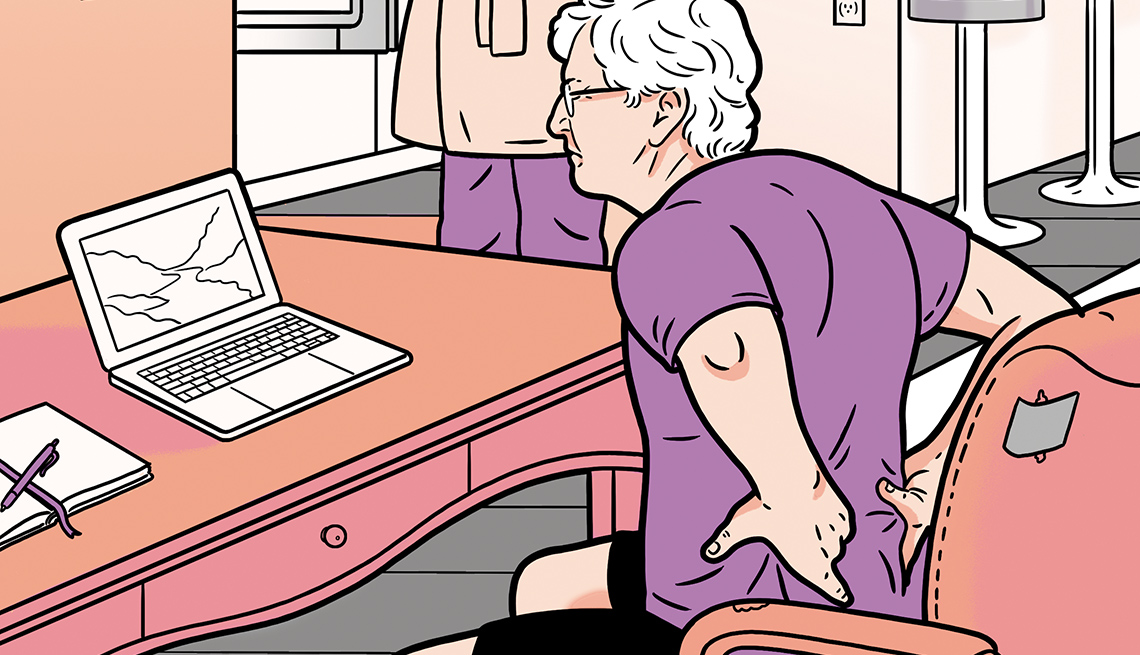 You’ve probably heard by now that lots of sitting can take a toll on your health. It’s also a lesser-known cause of back pain. “If you’re sitting for a period of time, your joints aren't being used,” says Akhil Chhatre, M.D., director of spine rehabilitation and assistant professor in the departments of Physical Medicine and Rehabilitation and Neurosurgery at the Johns Hopkins University School of Medicine.

Immobility in that nerve-dense location can jump-start what’s known as the pain-spasm-pain cycle, in which a skeletal muscle spasm causes pain in your spine. That exacerbates the spasm, which, in turn, exacerbates the pain. “It doesn't involve just your spine,” Chhatre says. “It can extend to your hips and sacroiliac joints.”

One study showed that people who sat for 75 percent of the workday reported more back and neck pain than those who sat less (25 to 75 percent of the time). And — not surprisingly — the pandemic made matters worse. A small population study out of Malta published last spring in Musculoskeletal Care suggests that the sedentary lifestyle enforced by the stay-at-home mandate and shift to remote working resulted in an increase in back pain. Part of the cause was inactivity, but the researchers say the lack of ergonomic furniture at home also could have played a role. Another possible reason: COVID-era weight gain.

Plenty of research shows that adults who clock long hours of sedentary time every day can counter the risks by increasing the amount of physical activity they do. To keep stiffness at bay, observe the 30-minute rule: Don’t let yourself idle in the same position for more than half an hour. You can even set an alert on your phone to remind you to get up and move around, walk or stretch a bit.

"Set a schedule where you dedicate time focused on stretching and core strengthening, totaling half an hour to an hour, six times a week,” Okubadejo says. “Instead of sitting down for four hours straight, cut that time in half. After two hours, get up for five minutes of stretching, then go back to what you were doing.”

About 1 in 3 of us have legs that aren’t exactly the same length, says Ryan Enke, M.D., a physical medicine and rehabilitation specialist in Rockford, Illinois. Often it’s something people are born with, although injuries or arthritis can cause one leg to become shorter.

A difference in leg length alters the normal biomechanics of walking or standing, Enke says. “That puts unequal stress or strain on one side of the body versus the other.” The solution may be as simple as adding a lift into the shoe on the shorter side, but physical therapy can help, he notes.

Yet another reason to kick the habit: Smoking damages the spine, according to a Swedish study published in The Spine Journal. Not only does nicotine damage spinal tissue, it can also weaken bones and make back pain worse. The number one reason people who have had spinal fusion surgery — back surgery to connect two or more vertebrae in the spine — don’t heal is because of smoking, Okubadejo says. “A lot of insurance companies won't approve back surgery for smokers for that reason.”

That’s not all. Research suggests that smoking affects the way the brain responds to back pain and makes people less resilient to it. As a result, suggests the findings of a study in the journal Human Brain Mapping, smokers are three times more likely than nonsmokers to develop chronic back pain. Over-the-counter pain meds, such as nonsteroidal anti-inflammatory drugs (NSAIDs), helped study participants manage the pain but didn’t change the brain’s response to it.

8. Your mattress is too old or too soft

That cushy mattress that makes it seem like you’re floating on a giant marshmallow may feel good when you slip into bed each night, but it’s not doing your back any favors. “If you use a plush mattress or an old mattress, the body tends to sink down, so there’s less support for the spine,” Okubadejo says.

Beyond new, the best type of mattress for preventing back pain is one that’s at least medium-firm. A review of studies published in 2021 in Journal of Orthopaedics and Traumatology suggests that sleeping on a medium-firm mattress not only improves sleep quality, it also reduces the risk of developing low back pain.

9. Your shoes don’t have enough support

Anybody who wears high heels knows they can do a number on your back. Turns out, even sensible shoes can change your gait and lead to back pain if the soles are uneven, which happens when you’ve worn them too long. “Think about your shoes the way you think about your mattress,” Chhatre says. “We talk about the support you need while lying flat; you equally need support while being upright.”

Look for shoes with soles that provide medium firmness and proper arch support. If you wear soft-sole shoes, “you might feel like you’re absorbing some of the impact, but if they’re too soft, you’re introducing instability,” he says. “The nerve endings in your feet provide a sense of balance, but even your nerve endings aren’t going to know how to provide support in a too-soft shoe.”

10. Your stress is eating at you

Stress wreaks all kinds of havoc on the body. No surprise, it can also put the squeeze on the muscles around your spine. “People usually carry stress in the neck and shoulder area,” Chhatre notes. But stress can cause pain to travel farther down the back because of the inflammatory response it sets off.

Say, for instance, you have a torn disc but aren’t showing any symptoms. Chronic stress can provide the “on” switch for the release of inflammation-causing molecules throughout the body. Inflammation, in turn, “opens the floodgates for pain,” Chhatre says.

To fend off this kind of pain, moving is particularly important, Okubadejo says. “If you're stressed, you may not be as active. If you’re less active, you may have pain, and if you have pain, you're stressed out.” As far as which exercise is the best remedy, he says it’s all about the “release of endorphins,” whether you opt for a long walk, a short run or strength training. Stretching, he notes, can help take the edge off, too.

Editor’s Note: This story, originally published June 25, 2021, has been updated with additional information from the November AARP Bulletin. 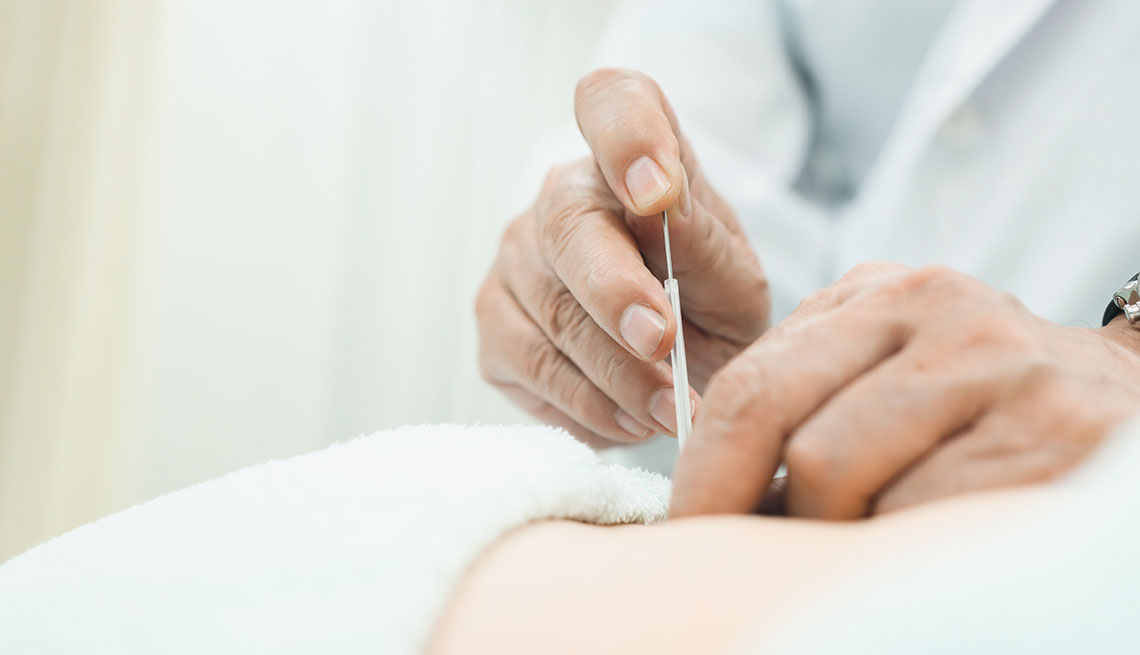 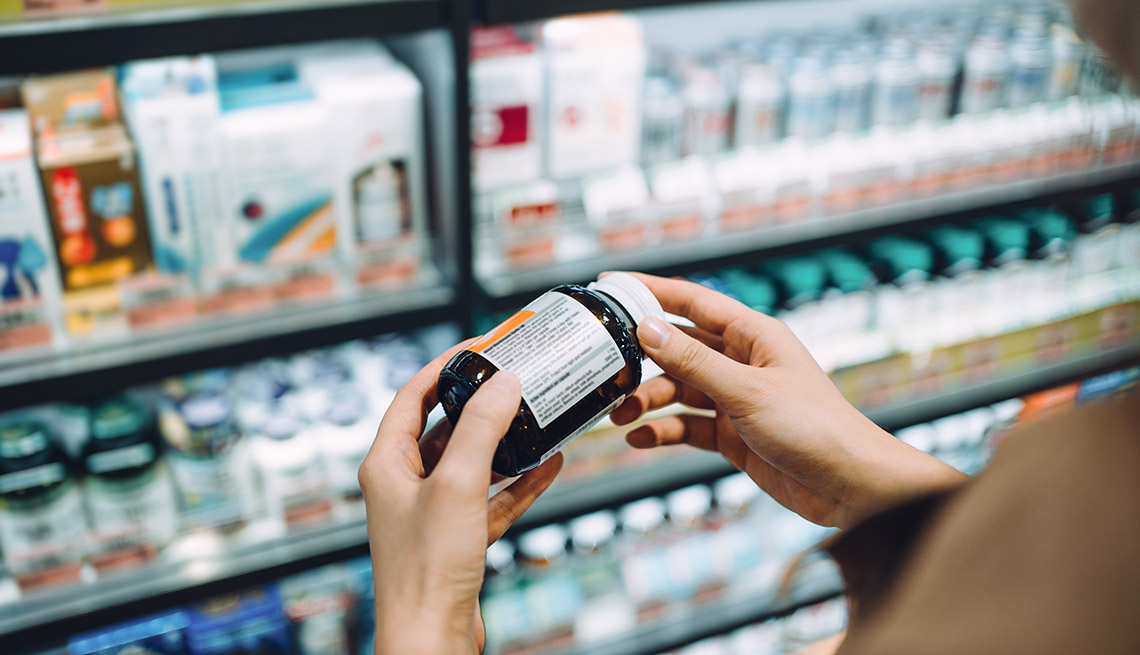 When it comes to vitamins and minerals, there's no need to take multiple pills 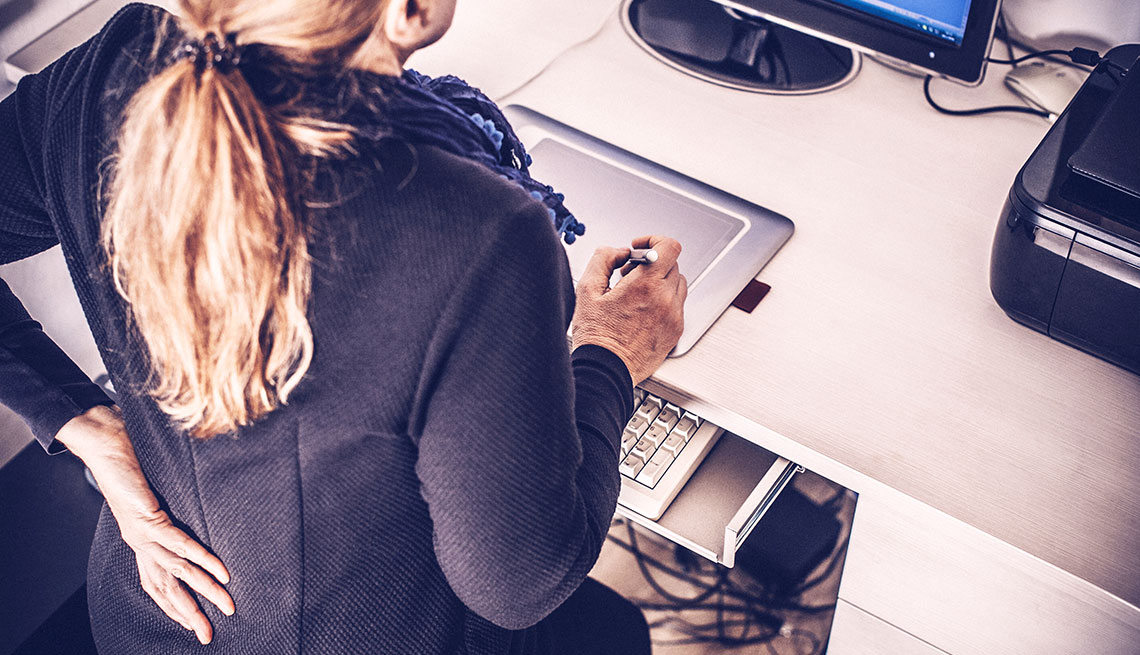 5 Ways to Fix Your Back Pain

Try these drug-free proven alternatives to tackle the aches