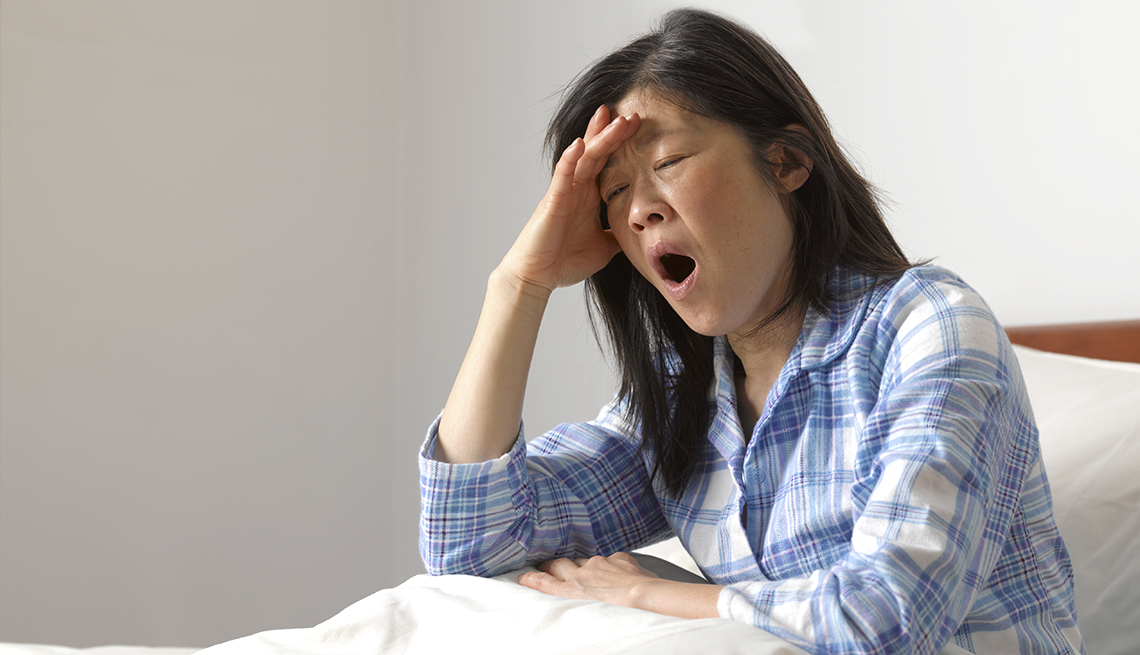 Sleep apnea — a condition where breathing during sleep continually stops and starts — is common as you age. Research shows that about 20 percent of older adults experience it — and that many of them don’t know they do﻿. A 2018 study published in the Journal of the American Geriatrics Society found that while over half of all people ages 65 and older are at high risk for sleep apnea, only about 8 percent were tested for it.

One reason may be that sleep apnea symptoms tend to be more subtle in older adults. “When we think of sleep apnea, we think of people snoring, but that’s not always the case,” says Adam Sorscher, M.D﻿.﻿, ﻿sleep ﻿health ﻿director at Alice Peck Day Memorial Hospital in Lebanon, New Hampshire. “As we age, fat tissue replaces muscular tissue in the throat and neck. This causes our airways to become more collapsible.” When this happens during sleep, it makes it harder to breathe, cutting off oxygen to your body — and causing a host of other symptoms beyond the all-too-audible one.

So it’s important that people with sleep apnea get diagnosed and treated. Untreated sleep apnea has been linked to high blood pressure, type 2 diabetes, stroke and heart attack. Research even shows that older adults with sleep apnea are more than twice as likely to die than those who don’t have it.

Up to half of all people with hypertension also have sleep apnea, according to the American College of Cardiology. “Every time someone with sleep apnea has a pause in their breathing during sleep, their sympathetic nervous system becomes activated and their blood pressure spikes,” explains Meir Kryger, M.D﻿., a ﻿sleep expert at the Yale ﻿School of Medicine in New Haven, Connecticut.

Your body also releases stress hormones, which can raise blood pressure. “A red flag is what we call resistant hypertension, which means that you can’t get your blood pressure under control despite being on at least two high blood pressure medications,” he says. The good news is that when these patients get their sleep apnea diagnosed and treated with continuous positive airway pressure, or CPAP — a machine that uses mild air pressure to keep airways open during sleep — their blood pressure usually improves.

About 30 percent of people with sleep apnea report having ﻿a headache when they wake up in the morning. It’s unclear exactly ﻿what causes the headache, ﻿though it may simply be due to decreased oxygen in the blood that occurs each time you gasp for breath, as well as dilations of blood vessels in your brain to try and compensate, says Beth Malow, M﻿.D﻿., ﻿director of the Vanderbilt Sleep Division at ﻿the Vanderbilt University Medical Center in Nashville, Tennessee. These types of headaches tend to occur frequently, on both sides of the head (compared to ﻿on one side ﻿with a migraine),﻿ and generally resolve on their own within a few hours of waking up.

It’s a little-known fact, but one sign of sleep apnea can be trouble getting and maintaining an erection, notes Kryger. In fact, one study presented last year at the Sexual Medicine Society of North America found that almost two-thirds of all men seeking treatment for erectile dysfunction also had obstructive sleep apnea. “Men with sleep apnea usually have lower testosterone levels, which they need for sexual activity,” explains Kryger. “Sleep apnea itself may also cause high blood pressure, which is also linked to impotence. And if you’re sleep deprived, you are less likely to be in the mood for sex in general.”

If you have sleep apnea, you may notice that you wake frequently throughout the night, which can lead you to think you have insomnia when you really don’t, says Kryger. “We see this a lot, especially in women — they go to their doctor and complain that they have trouble staying asleep, and they’re diagnosed with anxiety and given sleeping pills, which can actually make their apnea worse,” he adds. This is especially true around perimenopause, a time when some women develop sleep apnea, he says. Says Malow, “Physicians assume their sleep problems are due to hot flashes, and don’t look for the underlying cause﻿.

Another common sign is waking up frequently to urinate. “Some men make an appointment with a urologist, because they think they have a bladder problem because they get up to use the bathroom five times a night,” says Sorscher. “Their bladders are actually fine. Once their apnea is diagnosed and treated, and they are sleeping more deeply, they don’t notice these sensations and don’t have any more nocturnal bathroom visits.”

About 30 percent of people with obstructive sleep apnea report having a dry mouth when they wake up in the morning. This may simply be because their apnea forces ﻿them to breathe through ﻿the mouth, which dries it out, says Malow. But it’s also seen more commonly among people with sleep apnea ﻿than it is with those who are just habitual snorers.

Let’s face it, many of us are sleep deprived, and feel tired. But with sleep apnea, you’re still wiped, even if you get a full night of sleep, says Malow. Experts say that﻿ in such cases, sleep apnea can be hurting the quality of your sleep﻿, even if you don’t realize it. You also may find yourself nodding off while doing activities you enjoy, like reading or watching TV. “If you find yourself falling asleep in situations where you should be alert, during ﻿Zoom meetings, or even while driving, that’s often a red flag sign,” says Kryger. You also may find yourself more irritable, and snapping at others.

If you notice any of these signs, Kryger recommends asking your doctor for a referral to a sleep specialist. (You can also take a screening test online, which will give you what's called the STOP-BANG score for obstructive sleep apnea. ). The gold standard treatment for sleep apnea is the CPAP machine, and now, with multiple forms of therapy and masks, most patients can find a comfortable option. “The good news is, when people are treated for their sleep apnea, most of their symptoms disappear,” he says.

Is Sleep Disruption Dragging You Down?

The pandemic may be disrupting your nighttime routines may be

Are you getting enough of it?