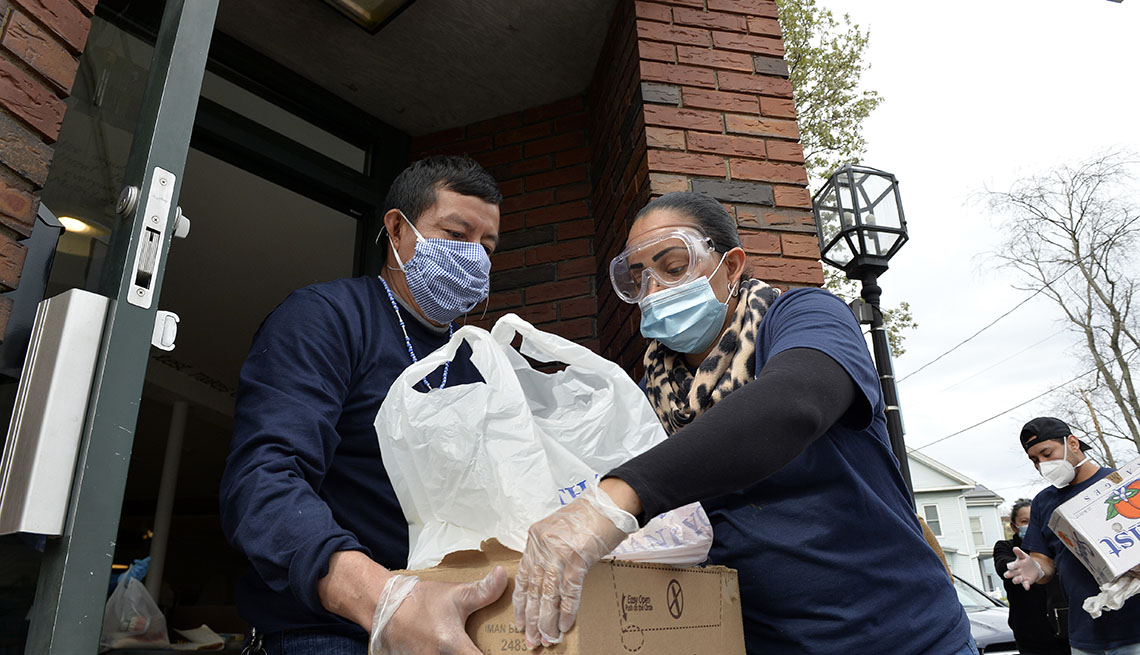 Jessica Armijo distributes food and packages of donated goods to people in need in Chelsea, Massachusetts, which has the highest infection rate of COVID-19 and the largest Latino community in the state.

En español | More Hispanic Americans are dying at younger ages from COVID-19 than their white counterparts, a new report from the Centers for Disease Control and Prevention (CDC) shows. About 34 percent of Hispanics who died of COVID-19 between mid-February and late April were under the age of 65. By comparison, about 18 percent of COVID-19-related deaths were documented in whites younger than 65 during the same time frame.

The new data is the latest in a series of studies that highlight a troubling trend: The coronavirus is taking a heavy toll on minority communities. Black Americans and American Indians/Alaska Natives, for example, are five times as likely to be hospitalized for COVID-19 as white people, according to the CDC; Hispanics are four times as likely to wind up in the hospital for coronavirus infections as non-Hispanic whites. And as coronavirus cases continue to climb in many states, health experts predict the burden on minority communities will persist.

Among 33 states identified by the Kaiser Family Foundation where new coronavirus cases are surging, 23 states in the South and West are home to 7 in 10 of all Hispanic individuals in the U.S. About 6 in 10 Asian American and American Indian/Alaska Native people live in these states, as do over half of black people, a new analysis from the nonprofit organization shows.

“The large number of people of color living in COVID-19 hotspots coupled with the already disproportionate impact for people of color will likely lead to further growth in disparities as the outbreak shifts to the South and West,” the report’s authors write. They point to the importance of “working with trusted community members and leaders and providing information in linguistically and culturally appropriate ways to effectively reach individuals” as one potential course of action.

Ramping up culturally appropriate messaging is important when it comes to addressing the virus’ disproportionate burden on minority communities, but it’s not the only answer, says Carlos Rodriguez-Diaz, an associate professor in the Department of Prevention and Community Health at the George Washington University Milken Institute School of Public Health. “We need to provide more testing where these communities are, rather than relying only on communities coming to the health care system,” he says. The Kaiser report also calls for more widely accessible testing.

Previous reporting shows that testing sites can be hard to come by in underserved, largely minority communities; in the early days of the pandemic, they were mostly absent. In May the federal government awarded $583 million to 1,385 federally qualified health centers for expanded testing in medically underserved communities. Retail chains have also announced efforts to set up testing sites beyond predominately wealthy areas.

“We know — and we have done this for other diseases and other issues affecting Latino communities — that when we work within the community, we do better,” Rodriguez-Diaz adds.

Minorities are more at risk

Bolstering protections for frontline workers whose jobs put them at greater risk for exposure to the coronavirus is also important when it comes to combating racial and ethnic disparities. Rodriguez-Diaz points out that the essential workforce includes many Latinos, “and once we started opening without having good preventive practices in place, or not having enough testing or enough risk communication in place for different groups in our communities, then the increased risk for infection was there, and they got infected,” he says. Black workers also make up a large share of essential workers, according to research from Brookings.

Improving access to health care services is another key component to reducing the burden of COVID-19 in minority communities. Compared to non-Hispanic whites, Hispanics are almost three times as likely to be uninsured, and non-Hispanic blacks are almost twice as likely to be uninsured, according to the CDC. Chronic health conditions that can worsen coronavirus infections, especially when poorly managed or untreated, are more common in racial and ethnic minorities.

As public health and policy leaders work to resolve some of the long-standing health inequity issues inflamed by the pandemic, Rodriguez-Diaz argues the communities being hit hardest “should be part of the decision-making process.”

“With everybody at the table, we can make wiser decisions,” he says. “I think we now have evidence of what we’ve been saying, that COVID is going to be with us for as long as we don’t have a vaccine, so we need to make decisions not only for the immediate response but for the long run.”