En español | Ask 69-year-old Barton Colin how worried he is about the coronavirus, and you'll hear that he's terrified. The retired California pool technician has chronic obstructive pulmonary disease (COPD). As such, he's considered at high risk for complications from the coronavirus and is following the advice of both the Centers for Disease Control and Prevention (CDC) and his physician by staying put in his home.

But a week ago, he began experiencing a flare-up of his COPD that left him waking up in the middle of the night gasping for breath. He realized that he needed to see his physician but was scared. “If I'm this bad now, if I come down with the coronavirus, it would kill me,” he says. “It's a sobering reality to be so sick that you desperately need the doctor but are too scared to go in."

Fortunately, when Colin called his physician's office at the University of Southern California (USC) in Los Angeles, the office was able to offer reassuring news: It had just unveiled a telemedicine program that would allow him to check in with him for a virtual visit.

On Friday, he did just that, chatting with Michael Hochman, M.D., for about 20 minutes about his symptoms. Despite a bad connection — “I just had a tiny little picture of him, but he could see me,” Colin says — Hochman was able to get a good grasp of his patient's symptoms and prescribed both an antibiotic (shown to reduce the risk of a flare-up) and a steroid (to treat inflammation that worsens symptoms). “It was much friendlier and not as stressful as having to drive 90 minutes and sit in a waiting room with other potentially sick people for what amounts to a 15-minute doctor visit,” Colin says. “What usually takes an entire afternoon was done in 20 minutes."

Scenarios like Colin's are fast becoming the new norm, especially for older adults. Over the last couple of weeks, Hochman's practice has been calling all patients scheduled for wellness and follow-up visits to see if they can convert them to virtual checkups instead. “What we want to do is avoid anyone coming into clinic unnecessarily,” explains Hochman, director of the Gehr Family Center for Health Systems Science and Innovation at the Keck School of Medicine of USC.

Over the last three years, the Centers for Medicare & Medicaid Services (CMS) has encouraged the rise of telemedicine by allowing doctors to bill for their time talking to patients over the phone and doing video chats to help triage medical issues. But for the most part, this has been limited to patients who traditionally have a harder time gaining access to physicians, such as those who live in rural areas.

On March 6, the Coronavirus Preparedness and Response Supplemental Appropriations Act was signed into law, which among other things gives the U.S. Department of Health and Human Services (HHS) the authority to temporarily waive certain Medicare requirements for telehealth services. “If a Medicare beneficiary is looking for advice, they can call their doctor and receive medical direction on whether they should come into the office for an exam,” explained CMS Administrator Seema Verma during an AARP town hall last week.

At a press conference on March 17, CMS announced that Medicare will now cover telemedicine for routine follow-up visits as well — so if you need to check in with your doctor for a chronic condition such as high blood pressure or type 2 diabetes, for example, you'll be able to do it via Skype instead of schlepping in for an in-person visit.

"It helps us prevent the spread of the virus,” Verma explained at a press conference announcing the news, pointing out that the benefits go beyond individual welfare to stemming the tide of coronavirus infections overall.

Physicians who take care of older adults, including geriatricians, are thrilled with this development. “With the advent of the coronavirus pandemic, there's greater urgency because we do not want to expose our older patients who are more vulnerable to its complications the risk of illness,” explains Ronan Factora, M.D., a geriatrician at the Cleveland Clinic. Like many doctors, he is calling his patients to encourage them to book a virtual visit whenever possible.

What to expect in a virtual visit

In reality, a telehealth appointment is very similar to what would happen in person, Hochman explains. Patients have a scheduled time where they phone in, followed by an email link that takes them to a computer check-in. (USC uses the software program OneTouch.) When the physician is ready to see a patient, both parties are connected via videoconference so that they can see each other. “I have their chart in front of me, and we do a medical history, just as we would in a typical visit,” Hochman says. 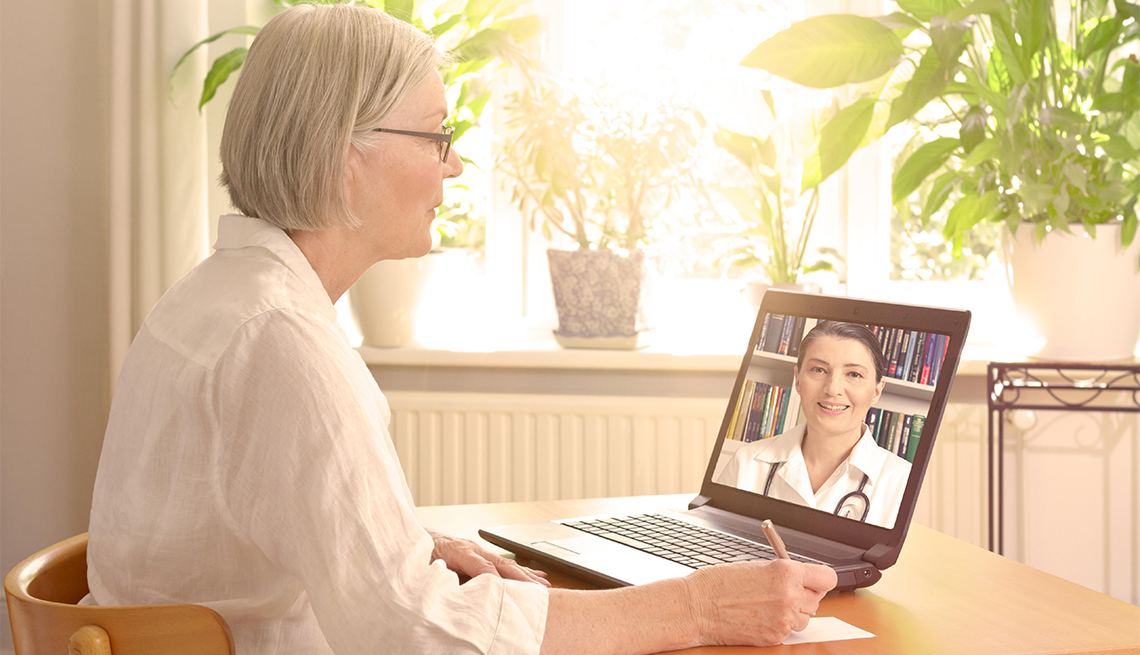 Have a pen and paper handy so you can jot down notes during a telemedicine visit with your doctor.

If patients are complaining of cold or flu-like symptoms, for example, Hochman has them take their temperature and talks them through measuring their heart rate. If the patient has an at-home blood pressure monitor, he'll ask him to use it while he's watching in order to make sure he's operating it correctly.

"You're definitely limited as to what you can do, compared with a physical exam. But you can tell a lot about a patient by how they look,” he explains. “Are they breathing hard? Do they look like they are in distress? It won't be as thorough as a physical exam because you can't do things like listen to a person's lungs or feel their abdomen or examine their skin. But 90 percent of a diagnosis is observation and taking a careful history."

Expanding use of telehealth in the future

One reason why many hospitals have not invested too much in telemedicine is because many patients, including older ones who may not be as well-versed in technology, have initially been suspicious of it.

"They've had difficulty embracing new technology in the past, but now coronavirus fears have propelled our patients to be more accepting of it,” explains Stephanie Chow, M.D., assistant professor of geriatrics and palliative medicine at the Icahn School of Medicine at Mount Sinai Hospital in New York City.

The hope is, Chow says, that the restrictions on telemedicine for insurance coverage will be loosened and hospitals will be able to continue doing it long-term. “We have patients who are isolated from their communities, with no family or health aides to help them. And those are the ones we really do worry about, because they have no easy way to get in to see us,” she adds. “This is an extraordinary opportunity to get them on board with it."

As for launching telemedicine in his practice, Hochman says that although some of his patients have initially expressed some frustration, once they've done it a couple times, they're firmly on the telemedicine bandwagon.

Colin says he's one of them. While he realizes that there are certain situations where he will have to be seen in person by a physician, his many medical issues — including being an amputee with a bad neck and back, along with his COPD — makes even a routine car ride a challenge.

"It's really exceptional to be able to see your doctor and not have to leave your house,” he says. “If it were more of a visual experience, where I could see my doctor in a full screen rather than a small square, it would have been 10 times better. But it's still in the early stages. Give them time to iron out the kinks."