Age and estrogen levels affect risk, treatment, prognosis and even types of cancer 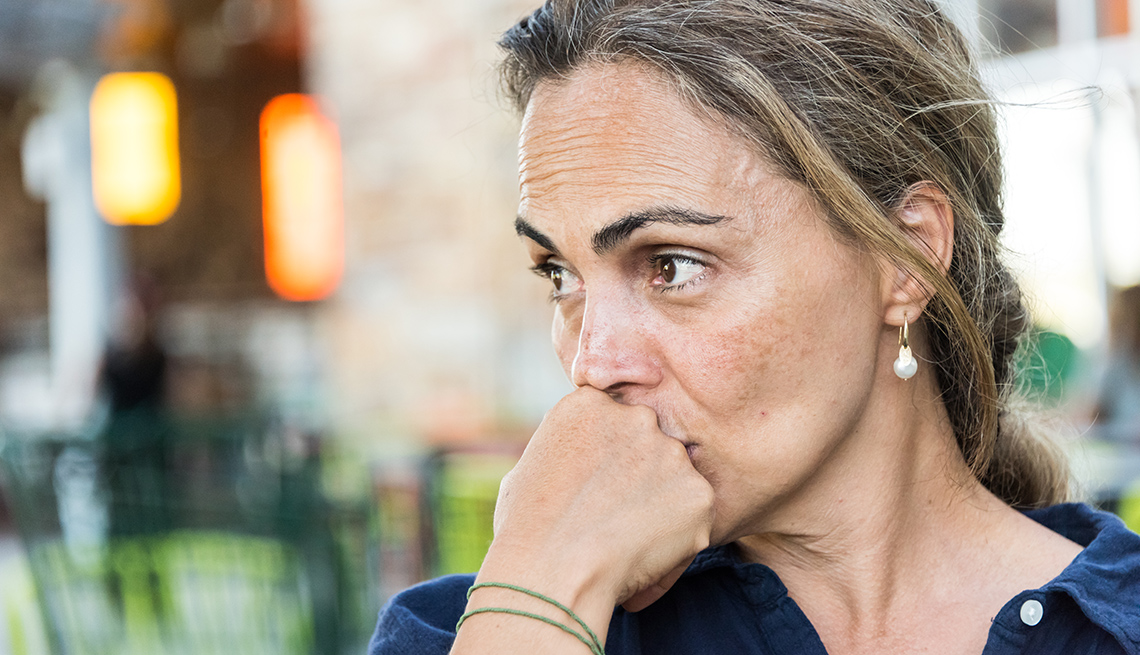 Menopause, plus cancer: It’s a one-two punch that some women of a certain age know all too well. Just as you’re (maybe) getting a handle on all of the delightful things that come with “the change” — hot flashes and night sweats, sleep disturbances, moods swings, brain fuzziness — bang, you’re hit with the news: You’ve got breast cancer. Suddenly, a difficult situation just got a lot more challenging.

The timing can be tough for other reasons, too. “A breast cancer diagnosis is devastating, but dealing with the disease during the postmenopausal years makes it even more challenging. It’s often a time of transition, and you may be dealing with anything from divorce to children leaving home to ageism in the workplace,” says Marisa Weiss, M.D., director of breast radiation oncology and breast health outreach at Lankenau Medical Center and founder of Breastcancer.org, who notes that many of her older patients worry about having to take off time from their job for treatment.

Menopause itself doesn’t boost your breast cancer risk, but growing older does. The median age of diagnosis for women in the U.S. is 62. (Rates begin to increase after age 40 and are highest in women over age of 70.) While weakening immune systems may play a role, in older women, the biggest culprit is estrogen — or, rather, the cumulative amount of estrogen exposure a woman has had over the years. In fact, about 80 percent of breast cancers in postmenopausal women are fueled by the hormone.

“Estrogen stimulates breast tissue, and the longer your breasts are exposed to estrogen over time, the greater your breast cancer risk,” says JoAnn V. Pinkerton, M.D., executive director of the North American Menopause Society (NAMS), and professor of obstetrics and gynecology, and division director of Midlife Health at the University of Virginia Health System. “For example, women who have a late menopause, entering menopause after age 55, are at an increased risk. Likewise, starting menstruation earlier, say, before the age of 12, and then going through a late menopause, also ups your risk.”

While certain types of estrogen decrease with menopause, your body continues to produce the hormone in later years, with most of it coming from fat cells and adrenal glands. Which means that weight gain, in particular, is a risk factor for postmenopausal breast cancer, since more fat cells mean more estrogen. Studies show that women who are overweight or obese after menopause have a 20 to 60 percent higher breast cancer risk than those who are lean. In fact, extra fat — particularly around the middle — is the body’s main source of estrogen in later years. What’s more, this type of fat secretes proteins that increase inflammation throughout the body, which has been linked to a higher risk of breast cancer recurrence, particularly in postmenopausal women.

Postmenopausal hormone therapy, combining estrogen and progestin to relieve symptoms of menopause, also has been associated with an increased risk of breast cancer when used over an extended period of time. “The more years that you’re in that marinade of hormones, the higher that risk,” says Marisa Weiss, M.D., director of breast radiation oncology and breast health outreach at Lankenau Medical Center and founder of Breastcancer.org.

Dense breasts — which have a lot of fibrous or glandular tissue and not much fat — may also be a factor. Though the link between breast density and breast cancer is unclear, one possibility, says Weiss, is this: “The environment inside dense breasts is an invitation to abnormal breast cell growth. The cells that live there become overstimulated. It’s like having a party with loud music, rather than a quiet library setting.”

These estrogen-fueled breast cancers — known as estrogen-receptor-positive cancer (ER-positive) — tend to grow more slowly and be less deadly. That means women usually require less aggressive treatment and, as a group, have a better prognosis and lower risk of recurrence. “Most postmenopausal women are likely to derive the effects they need from antiestrogen therapy,” says Weiss.

These drugs, usually taken once a day, prevent cancer cells from being stimulated by estrogen. Most doctors recommend these medications after initial treatment, such as surgery — or possibly after surgery combined with radiation and/or chemotherapy, for rarer, more aggressive cancers.

There are two types of drugs, which work in different ways. Aromatase inhibitors (or AIs) slow or stop the body from making estrogen, and as a result, the tumors die. Tamoxifen blocks the action of estrogen on breast cancer cells. “Postmenopausal patients with estrogen-positive breast cancer can be safely treated with either tamoxifen or an aromatase inhibitor, but generally speaking, aromatase inhibitors have better efficacy and do not increase risk of blood clots or uterine cancer,” says Stan Lipkowitz, M.D., a senior investigator with the Women’s Malignancies Branch of the National Cancer Institute Center for Cancer Research.

If you’ve been diagnosed with early-stage estrogen-receptor-positive breast cancer, you can also ask your doctor if gnomic tests like Oncotype DX are needed. The test involves analyzing a sample of genes in a cancerous tumor to help doctors figure out a woman’s risk of the cancer coming back, as well as how likely she is to benefit from treatments such as chemotherapy after surgery. “What Oncotype DX is telling us is that there are some types of breast cancers that are so nonaggressive, eventually, 10 or 15 years from now, we’ll be doing what we’re doing with prostate cancer, which is monitoring, rather than treating, the disease,” says Otis W. Brawley, M.D., chief medical and scientific officer for the American Cancer Society.

While estrogen-related tumors, which are less aggressive and slower-growing, tend to be more common, more aggressive cancers are still a possibility after menopause. One survey of U.S. Medicare patients found that approximately 18 percent of elderly metastatic breast cancer patients had a cancer known as “triple negative,” which doesn’t have estrogen and progesterone receptors.

In some cases, postsurgical treatments for these aggressive cancers, such as radiation and chemotherapy, may not even be considered. “Some women who are over 70 may not [be] offered extra therapy because of their age,” says Pinkerton. If you have a small or slow-growing tumor, it might not affect your survival rate, and some women are simply too ill or frail to benefit from the extra treatment. On the other hand, an otherwise healthy and fit woman in her 70s — who may live an additional 10 or 20 years — who is diagnosed with breast cancer that could spread, may be able to tolerate an intensive treatment such as chemotherapy.

“Decisions should not be based on age alone,” says Pinkerton. “When deciding on treatment, it’s important to look at the whole picture: the health of the woman, the size of the tumor and how aggressive it is, whether the cancer cells have spread outside the chest, as well as the possible side effects of the medication. Individualization becomes very important.” All of this, Pinkerton notes, is a great incentive to stay healthy: “Your treatment options are so much better — even in your 70s or 80s — if you keep your body in good shape.”

The decision about whether or not to have reconstructive surgery, which is more about quality of life than life-and-death, may also not be clear-cut for older women. “The longer you’re under anesthesia, the higher the risk for complications,” says Weiss. “For example, you may have noticeable cognitive loss that you may or may not recover from. You’re also at a higher risk for a heart attack, pulmonary embolism or stroke, or infection. Things also heal slowly as we get older.” Being a smoker makes such surgery even more challenging.

To be sure you’re getting the best guidance possible, Pinkerton suggests adding a menopause specialist, who may be an ob-gyn or internist, to your team. Go to the North American Menopause Society website (www.menopause.org) and type in your zip code to find a NAMS Certified Menopause Practitioner (NCMP) near you.

For women age 50 and older, the five-year survival rate for breast cancer is 89.7 percent, according to the National Cancer Institute. Encouraging, to be sure, but here are some ways to up those odds even more.

Exercise. Along with a smart diet, raising your fitness game can help you achieve a healthy body weight to lower estrogen levels. A 2013 study found that exercising, even at a moderate level (the equivalent of walking three to five hours a week at an average pace) following a breast cancer diagnosis, led to a 40 to 50 percent lower risk of recurrence when comparing the risk in women who sweat less. The results were particularly apparent in women with hormone-responsive breast tumors.

Diet. According to a 2012 study that appeared in the journal Epidemiology, those who gained more than 10 percent after their diagnosis had a worse survival rate compared to women who maintained their prediagnosis weight. (There’s less research to show whether losing weight during or after treatment can improve a prognosis or lower the risk of recurrence.) Keep those pounds in check by sticking to a diet that’s high in vegetables, fruits, whole grains, and proteins, such as chicken and fish.

Alcohol. Some research has shown a link between breast cancer survivors who drink and an increased risk of a recurrence of the disease (for example, finding more cancer in the same breast or in the other “healthy” breast). But according to a 2016 study from the Fred Hutchinson Cancer Research Center, alcohol use after a breast cancer diagnosis does not increase your risk of dying of the disease — as long as you sip in moderation (say, an occasional glass of wine). Always safe? Avoiding alcohol altogether.

Smoking. Here’s one more reason to quit: Women diagnosed with breast cancer who continue to puff are less likely to survive the disease than those who either never smoked or quit at the time of their diagnosis, according to a 2016 study done by the University of California, San Francisco.

Stress. There is no proof that stress and anxiety can increase breast cancer recurrence. However, some research suggests that soothing mindfulness exercises and techniques (such as meditation, yoga, visualization exercises, behavior modification and prayer) can help breast cancer patients deal with symptoms of treatment, such as fatigue, anxiety, insomnia and depression.

The War on Cancer Turns 50

Understanding of the disease has deepened but challenges remain