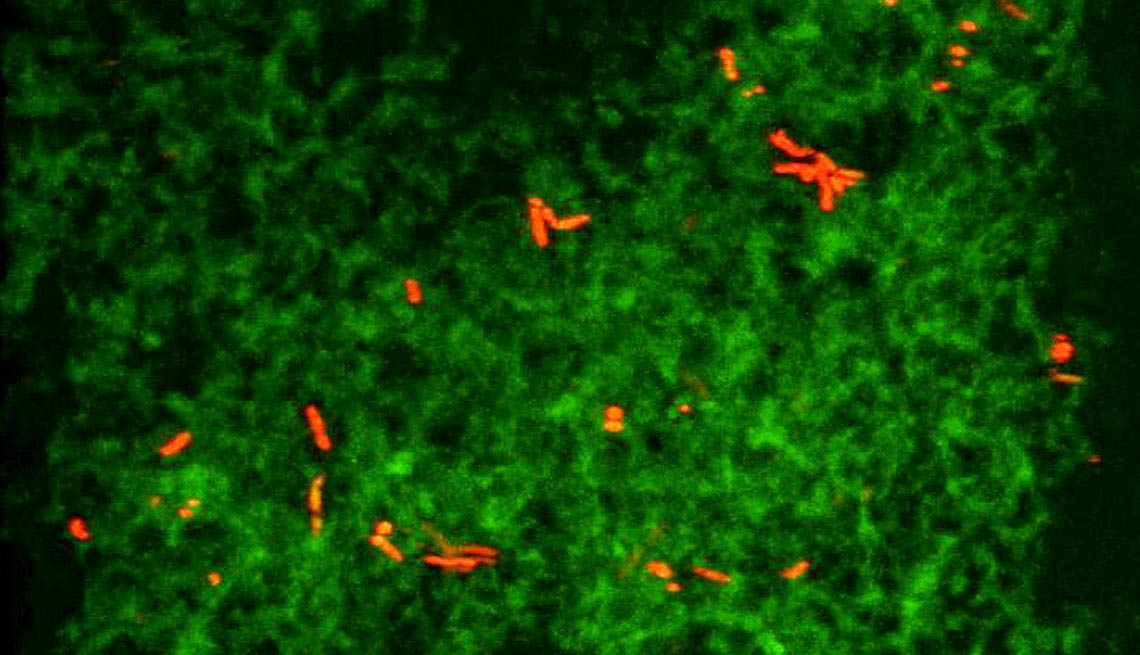 Salmonella bacteria, shown as red spots, are entrapped in a cage of beta amyloid, represented in green.

For years scientists have been trying to understand the root cause of Alzheimer’s disease. Now an intriguing new study suggests that the debilitating brain disease may actually be triggered when the brain’s immune system goes awry. The findings could lead to new approaches in treatment, and possibly even a vaccine to protect the brain.

For a century, scientists have known that the brains of patients with Alzheimer’s are full of sticky plaques formed from clumps of a protein called amyloid-beta that has long been suspected to be a principal villain in the disease. But now a group of Harvard scientists believe the plaques, instead of being harmful, may actually form to protect the brain from viruses, bacteria or other pathogens. And just as an overactive immune system can lead to autoimmune diseases such as rheumatoid arthritis, an overactive protection system in the brain could be causing Alzheimer’s.

To test their theory, the Harvard researchers, led by Robert D. Moir, injected the brains of mice, fruit flies and worms with salmonella and other harmful bacteria. “In every single case amyloid afforded protection against infection,” says Rudolph Tanzi, M.D., of Harvard Medical School and an author of the new study. He described it as an oyster forming a pearl around a grain of sand to protect itself.

The researchers then injected salmonella into the brains of 4-week-old mice that had been genetically programmed to get Alzheimer’s disease. These mice, though, had a rapid response: “The microbes seeded the plaques overnight — we didn’t see that coming,” Tanzi said. They published their results in the journal Science Translational Medicine.

The new theory could help explain why people who get lots of exercise and plenty of sleep have a lower risk of Alzheimer’s disease. As we get older, “our ability to clear those plaques is diminished,” says James Hendrix, director of global science initiatives at the Alzheimer’s Association. But exercise adds oxygen to the blood, allowing it to pick up the excess amyloid proteins and clear them from the brain. New research also has shown that the brain clears amyloid protein during sleep.

The next step is to figure out which microbes are trapped in these plaques, Tanzi says. If researchers can discover which viruses and bacteria are the most dangerous to the brain, “we might be able to create a vaccine against those pathogens,” Hendrix says.

To that end, the Cure Alzheimer’s Fund, which funded this new research along with the National Institutes of Health, is initiating a study to see what microbes live in plaques.

Researchers caution that there is a long leap between this finding and a cure for Alzheimer’s. “It is always helpful for the field to have new findings to explore. A lot more work will need to be done to determine how this might apply to treatment of patients,” says Marilyn Albert, a neurologist at Johns Hopkins School of Medicine and chair of AARP’s Global Council on Brain Health.