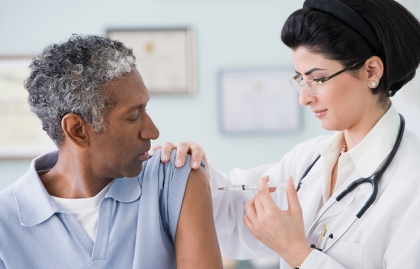 The CDC recommends people 60 and older get the shingles vaccine, but current data shows only 1 in 4 roll up their sleeves.

En español | In her practice as an eye specialist at Wills Eye Hospital in Philadelphia, ophthalmologist Elisabeth Cohen had seen her share of devastating cases of herpes zoster, also known as shingles. An outbreak can cause excruciatingly painful skin eruptions that may take weeks or months to heal. In some people, shingles leads to years of chronic pain so fierce that it increases the risk of depression and even suicide. And when the viral infection strikes the eye, it can cause permanent vision loss. Each year about 1 million Americans get shingles, and most of them are over 50.

Cohen knew well the suffering shingles can cause. And when she ran her fingers through her hair and felt a rash one day in 2008, she immediately suspected what it was. "I was treated immediately, and by some of the best doctors in the world," says Cohen, 65, now a professor of ophthalmology at New York University School of Medicine. "Even so, I suffered through six weeks of terrible pain — a kind of lightning pain that literally takes your breath away." Worse than that, the virus invaded the cornea of her right eye, damaging her depth perception. Within a year, Cohen had to abandon her practice.

Two years before her attack of shingles, in 2006, the U.S. Food and Drug Administration (FDA) approved a vaccine that helps protect against the disease and lower the risk of complications. The Centers for Disease Control and Prevention (CDC), which establishes official public health guidelines, recommends the vaccine for people 60 and older — a recommendation that most doctors and insurance plans follow. Insurers typically don't pay for the vaccine until after age 60.

Cohen was 58 when the virus struck. Since then, she has become an outspoken advocate for getting the shingles vaccine starting at 50, when the risk of shingles begins to climb. "We have a vaccine that can prevent terrible suffering," says Cohen, who now devotes most of her research to shingles. "Why are we waiting?"

In fact, after reviewing new data from a study of 22,439 patients, the FDA in 2011 approved the use of the vaccine in people ages 50 to 59. But after separate reviews in 2011 and 2013, the Advisory Committee on Immunization Practices, which advises the CDC, decided not to change its recommendations, which continue to call for vaccinations only after age 60.

How did two national health agencies come up with different recommendations? The answer lies in the different mandates of the two agencies. "In approving a new drug or vaccine, the FDA looks at just two criteria — safety and effectiveness," explains Michael N. Oxman, M.D., a professor of medicine at the University of California in San Diego and staff physician at the VA San Diego Healthcare System who has helped conduct several landmark studies of the vaccine.

The CDC, in contrast, also considers cost effectiveness, vaccine supply and other criteria, using statistical models to show when a medicine or vaccine will have the biggest benefit across a large population. It concluded that vaccinating at age 60 would prevent the most cases.

Targeting the optimal time to get the vaccine is crucial because the risk of getting shingles — and of complications from an outbreak — increases with age, explains Kenneth Schmader, M.D., chief of geriatrics at Duke University Medical Center. "Most of us carry the varicella zoster virus, which causes chicken pox and herpes zoster, or shingles. Our immune systems keep it in check. But as people age, their immune systems weaken — a phenomenon known as immune senescence — and the virus can break out, causing shingles."

Waiting to get the shot until age 60, the CDC concluded, would prevent more cases and complications, including a condition called postherpetic neuralgia, which causes chronic and often intense burning pain from nerves damaged by the virus.

Not everyone agrees. After her infection, Cohen and her colleagues reviewed cases of herpes zoster eye complications at Wills Eye Hospital and found that half of the patients developed them before age 60. Her findings suggest that the risk of eye complications from shingles is roughly the same for people in their 50s as it is for those in their 60s.

Best timing for you

Since doctors and insurers typically follow the CDC's guidelines, most plans won't cover the cost of the shot — which can top $200 — until age 60. But knowing how devastating the illness can be, should you get the shot earlier, even if you have to pay the full cost?

The single best reason to get the shot at 50 is to protect yourself when the risk of shingles and its complications first begins to climb. "The shingles vaccine works by stimulating the immune system to protect against herpes zoster," Cohen explains. "The stronger your immune system, the more protection you'll get."

People who get the shot in their 50s typically have a stronger reaction to it — and gain more protection — than people who get vaccinated in their 60s. A recent study that looked at people 50 to 59 found that it was almost 70 percent effective in preventing shingles in that age group. In people who were 60 to 69, other research showed, the vaccine was about 51 percent effective.

But there's an equally good reason not to get the shot until your 60s. Researchers don't yet know exactly how long protection from the shingles vaccine lasts, but the latest findings, from the Shingles Prevention Study, suggest that the vaccine may protect against a case of shingles for about eight years. The obvious solution would be to get a booster shot, but as yet there's no evidence that a booster shot would even work.

Current guidelines for preventing shingles and its complications may also change if a new candidate vaccine now being tested wins FDA approval. Unlike the currently approved vaccine, which uses a weakened live virus to spur immunity, the experimental vaccine uses just a piece of the virus, called an antigen, paired with a substance that stimulates immune response, called an adjuvant.

"The goal of our effort was to stimulate and enhance a particular immune response that would make the vaccine more effective," says Leonard R. Friedland, M.D., vice president and director of scientific affairs and public health at GlaxoSmithKline, the maker of the new investigational vaccine.

Preliminary results are encouraging. The shot was 97.2 percent effective in preventing shingles, according to results from a study published online in the New England Journal of Medicine this year — far more effective than the current vaccine. "Even more encouraging, it didn't matter when people were vaccinated — in their 50s, 60s or 70s. The vaccine still offered the same level of protection," adds Friedland, who says the company hopes to file for FDA approval within a year or two.

A new, more effective shingles vaccine would be welcome news. But even then, the biggest public health challenge will remain: getting people to get the shot. Currently, only about 1 in 4 people 60 and over even roll up their sleeves. "It's really a shame," Schmader says. "I can't tell you how many older patients we see with really horrible suffering from shingles — suffering that could be prevented or alleviated if they'd just been vaccinated."

What to Watch For

Pain, burning, numbness or tingling, usually in one location on one side of the body. The area may be very sensitive to touch.

In 2006, the Food and Drug Administration approved the shingles vaccine for people 60 and over.

In 2011, after reviewing new data on the safety and effectiveness of the vaccine in the 50-to-59 age group, the FDA amended its approval to include people 50 to 59.

The Centers for Disease Control and Prevention (CDC), which establishes official public health guidelines, has concluded that vaccinating after 60 prevents the most cases of shingles. Medicare and most insurance plans follow the CDC's recommendations.