When Max Wallack visited his "Great Grams" at a nursing home for patients with Alzheimer's disease, he made a simple observation: Alzheimer's patients, who are often agitated, seemed calmer and more focused when they worked with jigsaw puzzles. 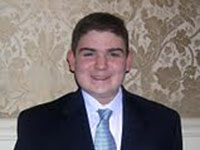 After his great-grandmother's death in 2007, Wallack decided his discovery was too important to just let it fade away. The next year, at the age of 12, the determined youngster began collecting puzzles and distributing them to Alzheimer's patients.

The result was his creation of the nonprofit Puzzles to Remember, which accepts donations of new and "gently used" puzzles.

So far, Wallack's nonprofit has distributed more than 5,400 puzzles to 380 nursing homes and veterans institutions that care for Alzheimer's and dementia patients in all 50 states plus Mexico and Canada. The idea has even reached across the ocean, where Alzheimer Portugal is now modeling a program on Puzzles to Remember.

Soon after starting his nonprofit, the Natick, Mass., resident intensified his search for free puzzles to distribute. He set up collection points at various Massachusetts locations and received grants from several charitable organizations to finance his project. His local Rotary Club covered the cost of shipping the puzzles for six months in 2010.

Wallack also contacted Steve Pack, president and owner of Allied Products Co. in Kansas City, Mo., the maker of Springbok puzzles, for puzzle donations. He persuaded Pack to manufacture a special line of puzzles with larger pieces that could be more easily handled by Alzheimer's patients, who often lose their dexterity.

The Springbok puzzles feature pictures with tranquil and pleasant images that Alzheimer's patients can relate to, including seasonal holiday images, flowers and teddy bears. To make it easier for patients to handle these puzzles, they consist of 12 or 36 large pieces. Pack also agreed to donate some of the proceeds from his sales to Puzzles to Remember.

"Doing a puzzle stimulates at least three areas of the brain," Pack says. "One of them is problem-solving. It's similar to exercising a muscle. It tends to retard the advancement of the disease. And it's mentally stimulating for the patient."

Bob DeMarco in Delray Beach, Fla., founder of the blog Alzheimer's Reading Room, has worked with Wallack to get out the word on the soothing effect of puzzle play.

"When a patient starts to do a puzzle and it works, they become more engaged. They can have a brighter look on their face," says DeMarco, who cares for his 94-year-old mother with Alzheimer's. "It makes them more engaged with people around them."

Two years ago, Robert Stern, director of the Clinical Core of the Alzheimer's Disease Center at Boston University's School of Medicine, began working with Wallack, who volunteers a half-day a week as a research intern at the facility.

"There are many different approaches being used to improve the functioning of Alzheimer's patients," Stern says. "Puzzles, especially easy ones, are another approach to exploiting another part of the brain that is intact."

The idea also gets high grades from Alzheimer's caregivers, who are seeing positive results with puzzle therapy.

"When patients are engaged and working with the puzzles, they aren't bored," says Carole Larkin, an independent geriatric care manager in Dallas-Fort Worth. "They probably won't remember the task, but they will remember feeling good about something, and feeling good will stick."

For Wallack, the journey from caring for his great-grandmother to starting his nonprofit has been a life-changing experience.

"I began this mission in honor of my great-grandmother, but it has become much more than that by now," he says. "I am committed to becoming a geriatric psychiatrist and doing everything I can to help Alzheimer's patients and their caregivers."