En español | Creams, lotions, lasers and peels can give your skin a glow and a more consistent color while erasing lines.

But dermatologists will recommend injectables, including Botox (botulinum toxin) and filler materials, such as collagen, to make an even more pronounced improvement in your wrinkles. Botox costs $300 to $500, and fillers generally run $500 to $1,000 per treatment. 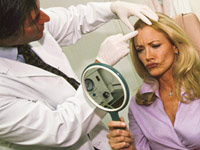 The Bulletin examines what works and what doesn't in a three-part series on how to keep your skin looking its best.

Part 3: Injections for your skin: Botox and beyond

Everyone from dentists to gynecologists now offers Botox injections.

Botox lasts three to four months, and works by paralyzing the muscle where it is injected, which prevents the wrinkle or frown line from forming. Botox also is used to reduce lines around the eyes, above the lip, on the neck and elsewhere. It does cause some burning and may cause bruising, but doesn't require any downtime.

Knowing where to inject it for the best results, particularly in older people, requires skill. You can use Botox only in muscles that you don't need to move — so you can freeze your frown but not your smile lines (also called marionette lines), explains New York dermatologist Neal Schultz in his book It's Not Just About Wrinkles.

The American Academy of Dermatology warns in its pamphlet on Botox: "A temporary headache is not uncommon after injections in the forehead area, especially after the first treatment. In rare instances, patients may develop weakness of the neighboring muscles leading to a temporary droopy brow or eyelid." But, according to the academy, all of these possible effects are mild and reversible.

Keep your head upright for two hours after getting Botox to reduce the risk of it moving to the wrong areas, such as your eyelids, writes Schultz.

Next: All about fillers. >>

Doctors will give an injection of filler along with Botox in deeper wrinkles, or use filler on its own in areas off limits to Botox, such as the marionette lines. These injections not only erase many wrinkles, they can fill areas in the face that have lost fat and appear hollow.

One of the safest fillers is hyaluronic acid — Restylane, Hylaform, or Juvederm Ultra and Ultra Plus — made from either bacteria or rooster comb.

Another longer-lasting filler, poly-L-lactic acid, works by stimulating collagen over time, so the skin fills out gradually. One of the longest-lasting is Sculptra Aesthetic, which requires multiple injections over the course of a month. But go easy with collagen builders or you could form a scar, says Rhein. Doctors use a local anesthetic to numb the area before the injection.

Normal side effects of fillers include pain, bruising and swelling at the site of the injection, which usually disappear in a few days.

Less common side effects listed by the Food and Drug Administration include raised bumps in or under the skin that may need to be surgically removed, tissue death and infection. In some cases, reactions "appear several years after the injections, when the patient does not remember which product was used," researchers write in the January 2011 issue of the Journal of the American Academy of Dermatology.

James Zins of the Cleveland Clinic in Ohio recommends starting out with a shorter-lasting filler, in case you don't like the look or you have a reaction to it. Also, another chemical can counter the effects of hyaluronic acid, if needed, he says.

Because the skin thins as we age, some thicker fillers might show under the skin, says Debra Jaliman, a dermatologist in New York.

When wrinkles are quite deep, you need a lot of filler, doctors warn, and it can get quite expensive. Indeed, to smooth out wrinkles, "a 75-year-old would probably need some sort of surgery," Zins says.

Or you could do both. Anne Gold, 83, had a face-lift in her 70s and now gets Botox, fillers and laser treatments from her son, a dermatologist. She also follows a rigorous daily skin care regimen. She wants to look as young as she feels, she says. "Everyone says I'm 60 and it's flattering, it really is," she says.

Tina Adler writes about health, science and the environment.

You may also like: Would you look younger if you could? >>