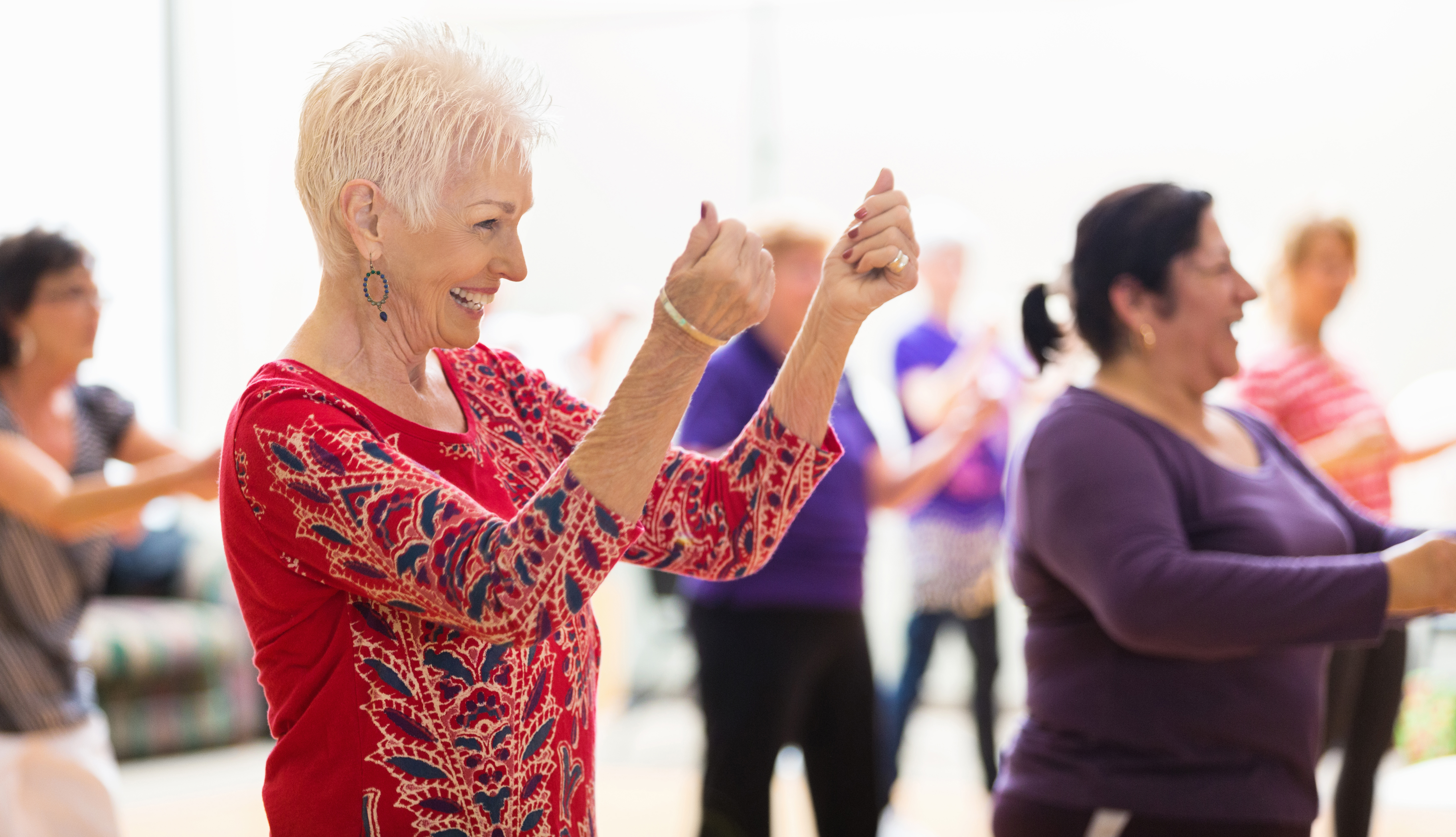 En español | Many of the participants who show up to Lucy Bowen McCauley’s “Dance for PD” classes struggle to walk through the door. Their movements are stiff; their gait unsteady. Some come with canes, while others are in wheelchairs.

But after a few minutes of stretching and warm-up exercises, which are often paired to Broadway tunes or oldies, a transformation takes place.

“I feel like we overwhelm the disease with the music,” says McCauley, who has been teaching dance in the Washington, D.C., area for more than 20 years. “They’re just able to move more.”

The disease McCauley is referring to is Parkinson’s disease, a progressive nervous system disorder that affects movement — hence the name of the class, “Dance for PD.” McCauley has been offering the free classes to people living with Parkinson’s and their caregivers for more than 10 years. However, the program is one that was developed nearly two decades ago by the Brooklyn, New York-based Mark Morris Dance Group.

Founding teacher David Leventhal’s first class had six participants. Now, “Dance for PD” — which focuses on increasing coordination, balance, flexibility and strength through music and movement — is taught in more than 300 communities worldwide.

“It offers people with Parkinson’s a chance to think differently about their movements, to control their movements, and to do so in a social environment,” Leventhal says about the tailored curriculum. What’s more, it arms participants with “a sense of power and grace in their physicality, which is so often something that starts to go away” as Parkinson’s progresses.

Music and dance can be effective treatment tools for people who have a range of age-related diseases, according to a new report on music and brain health from the AARP-founded Global Council on Brain Health (GCBH). In Parkinson’s disease, for example, the rhythmic nature of music “provides an external source for meter, like a pulse” that can help activate areas of the brain responsible for movement, explains Julene Johnson, a professor at the Institute for Health and Aging at the University of California, San Francisco and a contributor to the GCBH report.

Studies have shown that rhythm can help improve gait speed and balance in people with Parkinson’s disease. It can also reduce falls in those with movement disorders.

Leventhal has witnessed music’s power over movement, firsthand. When he turns on a song that resonates with a particular group of “Dance for PD” participants, the slowness and rigidity that go hand-in-hand with the disease begin to fade and movements become more fluid — “almost like they don’t have to think about it,” he says.

“That means they’re really finding a state of flow; they’re integrating different parts of their brain to generate that movement experience. And music, I would argue, is one of the primary elements that allows that state to happen,” he adds.

The social aspect of “Dance for PD” is another important piece of the puzzle, or, as Leventhal says, “the glue that holds it all together.” The group environment encourages hesitant participants to join in. People are also more likely to become fully immersed in music and movement when their friends are dancing with them. “So the social bonds that are inherent in the class are used to generate movement and to sustain movement,” he says.

What’s more, engaging with others who are going through a similar life experience provides additional support for people living with Parkinson’s. Depression, anxiety and feelings of isolation are common nonmotor symptoms of the disease. “But this environment is a place where they feel completely comfortable and they feel that they belong,” Leventhal adds.

Music and dance’s ability to help people form social connections is another reason why experts tout its brain health benefits. Research from the GCBH shows that dancing with others or making music in groups promotes a sense of belonging and well-being, which is associated with reduced dementia risks. (Many people with Parkinson’s disease experience damage in the brain that leads to dementia.) Engaging with others also helps individuals maintain thinking skills and slows cognitive decline throughout the aging process.

Patients, caregivers, therapists and medical professionals are taking note of music’s positive influence on Parkinson’s and other age-related disorders. All over the country, there are Parkinson’s choirs and dance groups that are using music as medicine to help overcome its debilitating symptoms. There are also stroke choirs and Alzheimer’s choirs that seek similar benefits.

Leventhal says with chronic neurological diseases such as Parkinson’s and Alzheimer’s, “the medical field reaches a limit where there just isn’t that much more that they can do to support somebody’s well-being and quality of life.” Both diseases have no cure, just drugs that can help alleviate symptoms in some.

That’s where music and dance can fill the void. “They address, head on, that quality of life and well-being that people need and want to maintain for years,” Leventhal says.

How Music Can Keep Your Brain Healthy