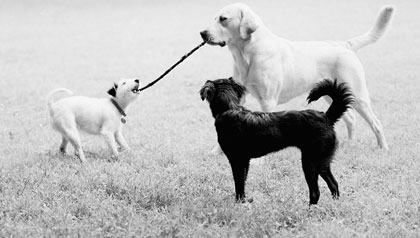 Social interaction may increase brain development in your pets.

En español | Cat lovers may hiss in protest, but a new study suggests that dogs are smarter than cats.

Or at least that they have bigger, more developed brains.

While scientists have shown that social interaction is important for the human brain, British researchers at Oxford University looked at man's best friend and discovered the same thing. The scientists found that, over millions of years, highly social species like dogs have developed bigger — and arguably smarter — brains in relation to their body size compared with solitary species, like the aloof feline.

The new research indicates that being sociable requires greater brain power — something dog lovers, of course, have always suspected.

The researchers from Oxford's Institute of Cognitive and Evolutionary Anthropology analyzed available data on the brain and body sizes of more than 500 species of living and extinct mammals. Although they found huge variations in how the brains of different species developed, the most profound changes in brain size were associated with sociability, says lead researcher Susanne Shultz. The findings were recently published in the Proceedings of the National Academy of Sciences.

The brains of monkeys have grown the most over time, followed by horses, dolphins, camels and dogs — all species that live in stable social groups. Animals that are more loners — the researchers mention deer, rhinos and cats as the James Deans of the animal world — have brains that have grown more slowly.

Notes coauthor Robin Dunbar, "Even animals that have contact with humans, like cats, have much smaller brains than dogs and horses because of their lack of sociality."

Shultz thinks the challenges of having to get along in a group — like dogs in a pack or dolphins in a pod — affect brain development. "Group living can be challenging, and over time some mammals have evolved larger brains to be able to cope with the demands of socializing," she explains.

This, of course, assumes that brain size is commensurate with intelligence. Anyone who has seen a dog drink from a toilet bowl or chase his tail might have doubts about this assumption. And owners of standoffish but ingenious cats might also quibble with the researchers.

Shultz acknowledges that "there is no doubt that there are different kinds of animal intelligence," but she insists that social interaction increases brain development. As she told the British newspaper the Telegraph, "It appears that interaction is good for the brain and extends to other species, like ourselves."

Social interaction not only helps brain development when we're young; recent research shows it can also protect our brains from decline as we age. Having a large social network can cut the risk of dementia by 26 percent, a 2008 study of older California women found. Having daily contact with family and friends cut the risk by half.

In other words, learn from the dogs. We all need a pack of friends to keep our brains in shape.