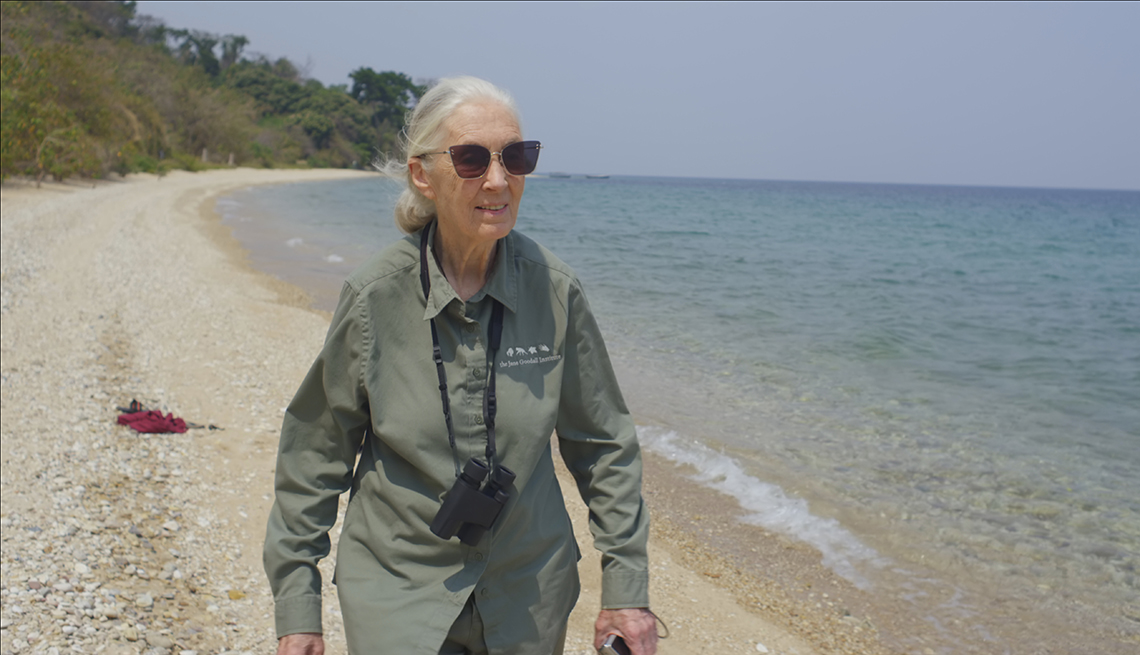 Dr. Jane Goodall walking along the beach of Lake Tanganyika in Africa in a scene from her new documentary.

En español | Celebrate Earth Day in tough times by watching the upbeat documentary Jane Goodall: The Hope (National Geographic, April 22, 9 p.m. ET). The sequel to the seven-Emmy-nominated 2017 doc Jane, it shows how she went from a scientist who revealed the human side of wild chimps to an activist who globetrots 300 days a year to inspire people to save the planet — and themselves. Goodall tells AARP what she's learned about COVID-19, hope, and the secret to vitality in her ninth decade.

We're finding out so much about animal emotion. They're sentient, like we are. Some people might not think that rats are cute, and yet they're a very favored pet for children around the world. The intelligence and empathy they show is being discovered more and more. I love the giant forest rats — the “hero rats” that have been trained to detect land mines. Animals help each other; animals help humans.

It was predicted in David Quammen's 2012 book Spillover: Animal Infections and the Next Human Pandemic. As we destroy habitats, animals are crowded together, so viruses can jump from one species to another. As they lose their own feeding grounds, they start raiding cities, in Asia and Japan. And that means there's more chance of a virus spilling over into humans. Worst of all is the hunting, the meat markets, the unhygienic cramming together of all kinds of animals. African meat market spillover from chimps to humans caused HIV in two different places. And as we know, some of these [coronaviruses] have started from wet markets in China.

Most people would say it's chimps’ tool using and tool making. But I think it's mothering — just as important as in human society. Chimps whose mothers are attentive, affectionate and supportive do better. Males reach a higher rank, they have more self-confidence, and females are better mothers. I was so lucky to have such a supportive mother, the only person supporting my dream of going to Africa when I was 10. [She went to Africa in 1960 at 26.] Everybody else said, “No, that's not possible. Africa is far away. There's a war going on. You don't have money. And you're just a girl.”

Animals vs. humans: who's smarter?

Chimpanzees love to paint — people pay for their paintings. Pigs paint, too — and dogs and horses. Animals can do way more than we thought. Think of the octopus, making houses out in the ocean where there aren't any rocks. They are highly intelligent. But they can't do the internet and send a rocket to Mars with a robot creeping off to take photographs. The rapid development of our intellect is really the only thing that separates us from the chimps.

Why she made Orson Welles redo his narration on her first documentary, ‘Miss Goodall and the Wild Chimpanzees’ (1965)

Dreadful — it was so inaccurate! And so Orson renarrated it from a hospital in Switzerland with a broken leg from skiing. 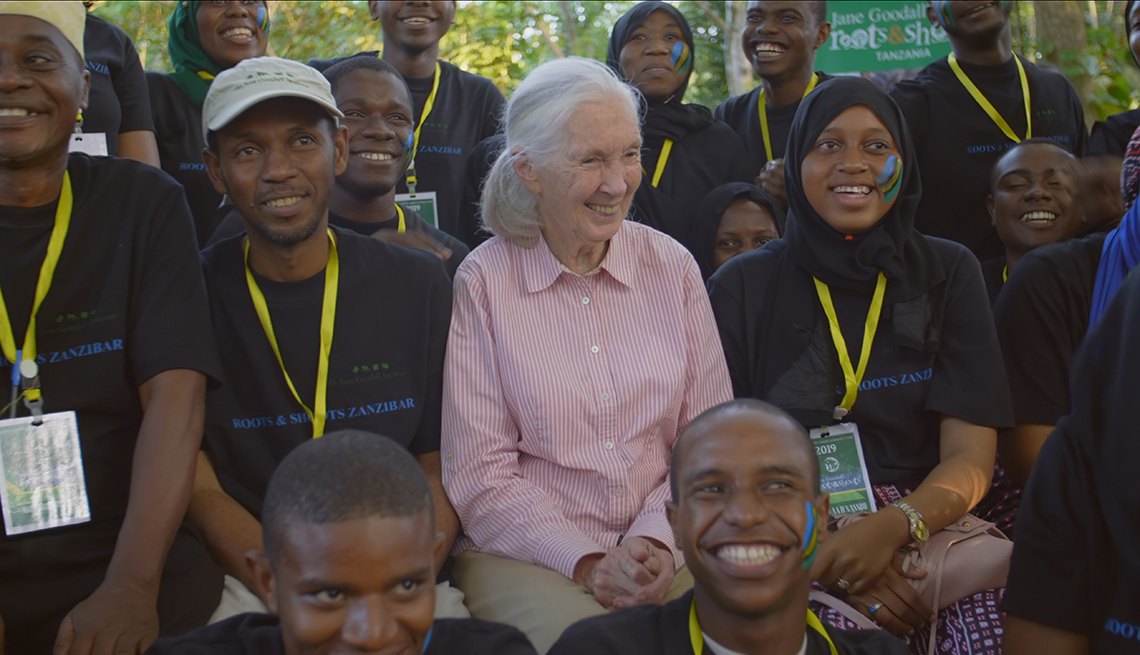 Dr. Goodall sitting with members of Roots & Shoots, a program of the Jane Goodall Institute.

Her retirement plans at 86

Some people say, “Are you going to retire?” Well, I can't. I haven't been busier in my life, from morning till night. We started the Jane Goodall Institute Roots and Shoots program for young people to do projects to help the environment and animals with 12 high school students in Tanzania in 1991, and now it's in 65 countries.

How views of older people have changed

I think we're moving back toward the indigenous way of thinking of older people as the elders, and valuing information that has been gathered over all the years. At least those people who think about it and take it in — what we would call wisdom. 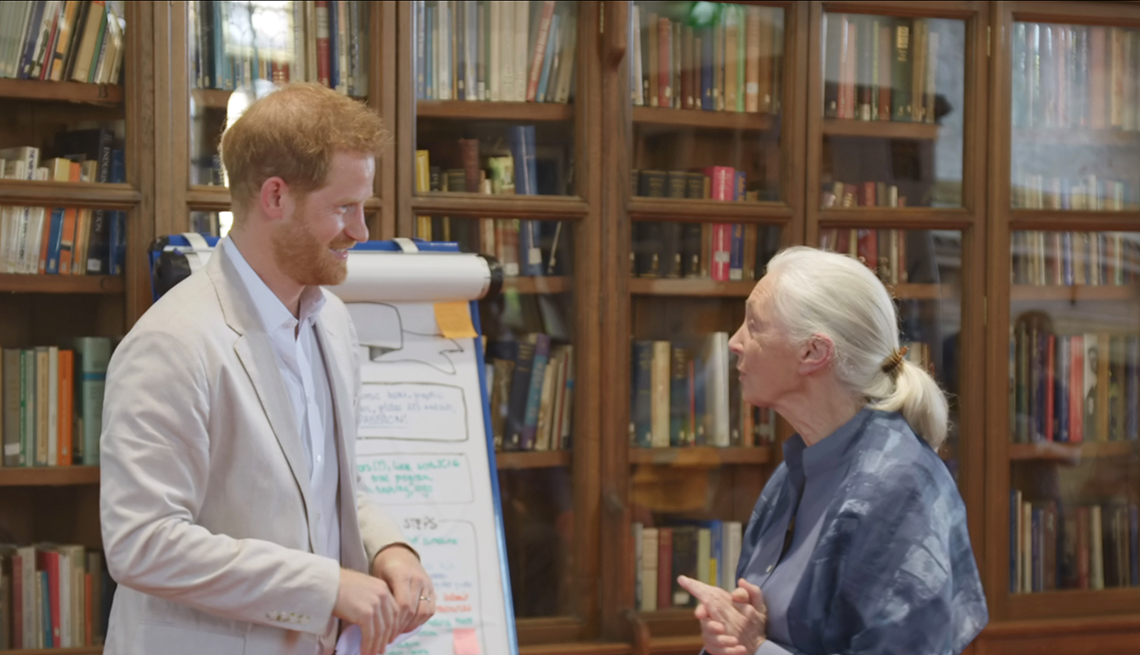 Goodall and Prince Harry at Windsor Castle for the 2019 global leadership meeting of Roots & Shoots.

Her message of hope

My message of hope is the energy and commitment of young people. Give the hillsides a chance and the forests come back. People come to realize that there are other ways of making a living than destroying the environment. Saving the forest is good for their future, not just for wild animals. And then there's the indomitable human spirit. The people who tackle the impossible and don't give up. We've got interviews with them in the film.

Her own key to longevity and health

I've got good genes inherited on both sides. My family lived to a good old age. I've been a vegetarian for a long, long, long time. Partly it's just that I don't even think about my health or anything like that. I just go ahead and do it. And I don't think about vitamin supplements. But it's passion, determination, and probably a drop of whiskey every night. And it has to be scotch whiskey. Not bourbon, please!