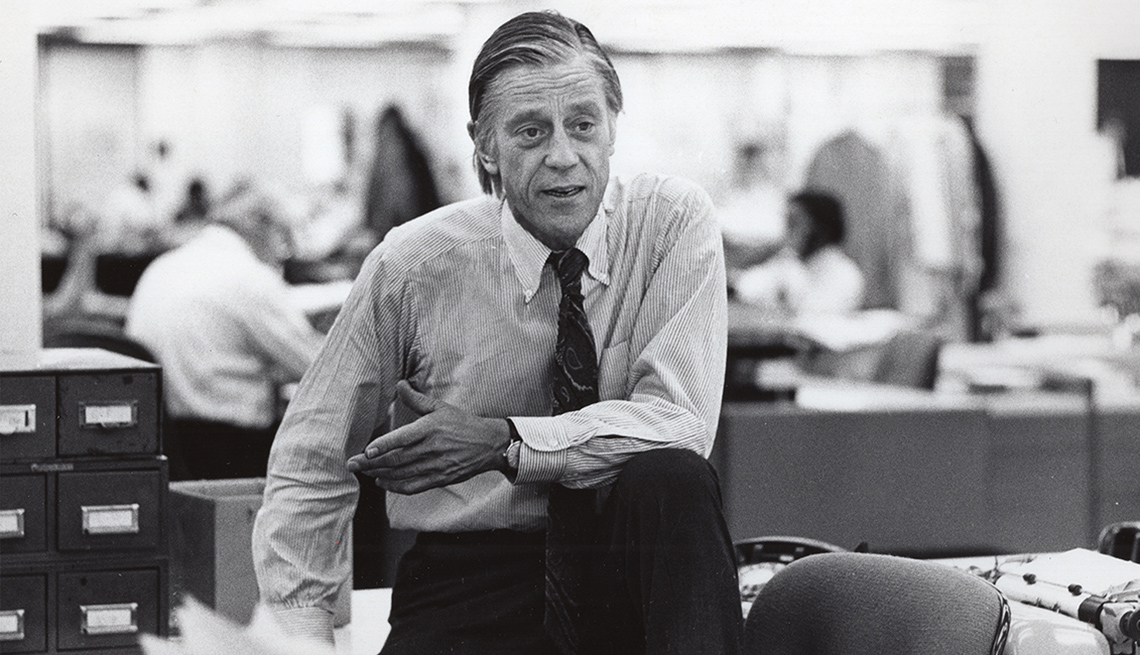 After 26 years of leading "The Washington Post," Ben Bradlee retired in 1991.

Want to see a film with a 100 percent Rotten Tomatoes score, but you've already watched Lady Bird? Tune in tonight at 8 (ET) to the HBO documentary The Newspaperman: The Life and Times of Ben Bradlee, about the legendary editor of the Washington Post who turned the paper from a regional pipsqueak into a national powerhouse. Bradlee presided over the Watergate investigation that toppled Richard Nixon and made the Post's Style section more of a must-read than that of competitor the New York Times. Indeed, that chatty section prompted former Secretary of State Henry Kissinger to say in the documentary, "They covered my social life more intensely than I thought the national interest required." This film perfectly covers the editor's personal life, public life and iconic status as the most admired journalist of his day.

But Bradlee, who died in 2014, thought the national interest required covering subjects that powerful people did not want reported. “He’s a mean bastard,” Nixon told Kissinger. “Our business,” Bradlee retorted in a TV interview during the Watergate days, “is not to be loved but to go after the truth.”

Actually, Bradlee did not strictly adhere to this ideal at the outset. Toughened by a childhood bout with polio, a rather checkered Harvard education and World War II service in the South Pacific that permanently eliminated his fear of anything or anyone, he got a break by getting a job at the Washington Post Co.'s magazine Newsweek. Then he got an incredible break when his friend and neighbor John F. Kennedy became president. He was so tight with Jack that wife Jackie told them, "Would you two stop making goo-goo eyes at each other?" JFK fed him the 1962 scoop of the American pilot of a downed U-2 spy plane whose release from the Soviets he traded for the U.S.' release of a top communist spy (the story told in director Steven Spielberg's Bridge of Spies; Spielberg's new film, The Post, tells the tale of Bradlee's Pentagon Papers battle). As Bradlee recounts, reading from his memoir in a voice like coarse-grit sandpaper, "Imagine a reporter dictating an exclusive story, a lead story, source from the president of the United States from a telephone just off the White House dance floor to the strain of Lester Lanin’s Dance Band!" In the film he admits that Kennedy might not have befriended him if he hadn't been trying to bed Bradlee's wife, Antoinette, quite aggressively.

Bradlee came out of that moral quandary unscathed and lived life in an ever-accelerating fast lane, with only a few crashes (like the Pulitzer Prize won by his reporter Janet Cooke, which was returned when Cooke confessed she made up the story's subject, an 8-year-old named Jimmy whom she claimed was an addict). "Bradlee always knew he was the luckiest son of a bitch in the world," says Jim Lehrer, whose incisive commentary is interspersed with the smart remarks of Tom Brokaw, Norman Lear, New Yorker editors David Remnick and Tina Brown, and  Bob Woodward and Carl Bernstein. The portrait that emerges is of a leader who was the opposite of Martin Baron, the Boston Globe editor immortalized by the Oscar-winning film Spotlight. Baron was like a Zen master, soft-spoken and thoughtful. Bradlee was brash, tempestuous, bigger than life, like a movie star, even before Jason Robards won an Oscar playing him in director Alan Pakula's All the President’s Men and Tom Hanks began vying for one as Bradlee in the current Oscar hopeful The Post. Remnick calls him "sweet and salty. He could curse like a sailor or a stevedore, and at the same time he knew which fork to use at the French Embassy." Another reporter who worked for Bradlee notes he was "the only editor who could ever call you into his office, make you understand that you had committed a terrible, terrible crime against journalism, and as you walked out you were saying to yourself, 'Aw, Bradlee, what a guy!'”

That's pretty much the attitude of this hagiographic documentary, but it doesn't avoid the blots on his reputation: two mistreated ex-wives, a neglected child he tossed into a pool to teach him to swim, the improper JFK friendship, the Cooke calamity. Teasingly, his friends reveal that after All the President's Men became a smash, Bradlee began swinging his arms widely while striding through the office, the way Robards did in the film. This doc spends just enough time on each episode of his life, concentrating, of course, on the Watergate investigation, not just the sleuthing but the backstage drama. He helped make Post publisher Katharine Graham — whose son called her "as self-doubting as any human being who has ever been" — the bravest dame on earth, facing down a president who had just won the biggest landslide in history, then burying him with facts that the national interest required. She risked her newspaper, her solvency and her reputation, and she, along with America and its Constitution, won.

That's what Bradlee will be remembered for, not his colorful personality and star-studded friendships, even if the press loses its current fight for survival. As he puts it in the film, the Nixon government's crackdown on journalism was "a black mark in the history of democracy. … There is no respect, no awe for the first amendment. It isn’t Mr. Nixon’s right [to] tell you what you can’t read. And it’s just as simple as that."