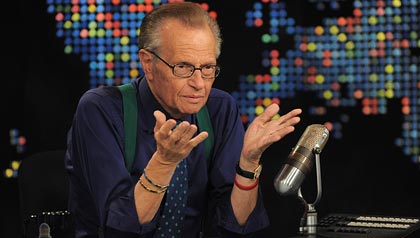 Ask Larry King the secret to his success as an interviewer and national conversation setter and he'd probably tell you "I'm Everyman."

That's because King, 77, who this week wraps up 25 years on CNN, sees himself as a stand-in for his viewers; he asks the questions he thinks we would ask of the celebrities and newsmakers who converse with him.

It's an unassuming approach that generally served the TV talker well, even if critics argued that he tossed softball questions to guests on whom he should have been tougher and celebrities sometimes found him unprepared or downright unaware of their cultural importance.

At the height of his success, he had 1.6 million nightly viewers, wrote a weekly column of quirky observations (which I edited for a short time) in the nationally circulated USA TODAY, and appeared as himself in 1990s movies like Dave and Bullworth.

As he goes out, King ranks third in his time slot behind Rachel Maddow on MSNBC and Sean Hannity on Fox. But King should be remembered as a cable pioneer and innovator who managed multiple talking heads on remote feeds with the agility of a juggler long before that many feeds or that type of talent became commonplace. He also deserves credit as a skilled interviewer who kept a link to his radio days by using a desk and mic format instead of the living room sofa sets favored by others in the TV talk-show biz.

Today, King — who estimates he has conducted some 50,000 interviews with celebrities, newsmakers and other culturally important or high-profile people — signs off for good. CNN has not announced who will share his final hour, nor how many guests may appear. There is speculation that the big three network news anchors Diane Sawyer, Katie Couric and Brian Williams will stop by. King himself said he wanted former New York Gov. Mario Cuomo, his first guest, to be his final one.

In fact, the final week has been a rather low-key tribute to the TV institution who has interviewed presidents and politicians, celebrities and CEOs. TNT talk-show host Conan O'Brian and soprano Susan Boyle, mother-daughter country singers Naomi and Wynonna Judd, and Barbra Streisand have been in the last week's lineup.

That may be because CNN is more interested in launching King's successor, Piers Morgan, the America's Got Talent judge who takes over King's 9 p.m. weeknight time slot in January. King and his trademark suspenders may disappear from CNN, but he is not retiring. He told The Hollywood Reporter he wants to do stand-up comedy. Maybe he can get on America's Got Talent.

Larry King has attracted quite a guest list over the past 25 years. He's interviewed practically everyone important in the world. Who was your favorite guest on his show? Share your fondest memory of Larry King Live below in our comments section.