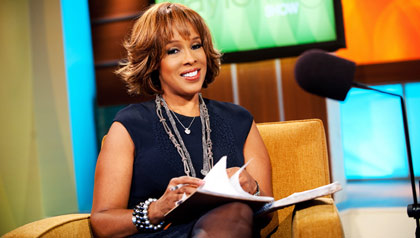 Gayle King during filming of The Gayle King Show at NEP Studios in New York.

Gayle King, aka Oprah Winfrey's Best Friend, kicks off a daily talk show of her own Monday on Oprah's new OWN network. She's not at all nervous.

• Gayle King is ready to do her OWN thing. Read

"My daughter, who's 24, said, ‘That must be what happens when you get old, because if it was me, I'd be freaking out,'" recalls King. "That's the beauty of aging — looking back on wisdom and experience and realizing what truly matters."

What King does not say is that her pervasive calm may come from the fact that she's also a veteran, award-winning broadcaster, with credentials as established and solid as those of her legendary friend.

The pair, both now 56, met in their early 20s when they worked together at a television station in Baltimore. Winfrey was a news anchor and King was a production assistant.

"We were friendly, but not really friends," King says. "There was a snowstorm. I was living 45 minutes outside the city and the weather was bad, and in typical Oprah fashion, she said, ‘I don't think you should drive in this weather. Why don't you stay at my house?' We stayed up until very late, like when you're 13 and having a slumber party, and we discovered we had a lot of similar interests and beliefs. We've been friends ever since."

While Oprah went on to global domination, King became a news anchor at WFSB in Hartford, Conn., winning three Emmys during her 18-year stint.

When her son and daughter, both now in their early 20s, were born, King thought she'd eventually trade in her career for full-time motherhood.

But by the time her children, Will and Kirby, hit their teenage years, King was divorced and professionally successful. She found work to be a key element in her life. So she learned how to juggle her home and work lives.

"What I realized is that when you're a working mother, you can't do everything, and you can't be everywhere. You have to go through life making choices," says King, who sees her children often these days because all three of them live in New York. "I refuse to beat myself up and feel guilty. I was always very involved and very, very hands-on. So I don't have regrets about that."

King got her first taste of hosting in 1997, when she briefly had a syndicated talk show also called The Gayle King Show. At the time, she thought she was being positioned for bigger things.

"The only reason I got into the talk show business then is because Oprah told me she was going to be retiring," says King. "So I would be on for a year, and then she would be off the air, and it would be sort of a transition."

But Oprah decided to stay put, and King's show was soon canceled. Then, in 1999, Winfrey appointed King editor-at-large at her new magazine, O, The Oprah Magazine, and together they made O one of the best-selling magazines in the country.

In 2006, King returned to hosting, this time on XM and Westwood One radio, where she has spent the last four years interacting with callers and discussing the issues of the day. The radio experience provides the model for her new show, which will air live with no studio audience, but with lots of call-in interaction with viewers.

King feels that her experience and ability to relate will keep viewers watching. But if it doesn't, then King will move on to the next stage of life with her head held high.

"The viewers ultimately decide what works and what doesn't," she says. "All I can do is just be myself, and hope people like what they see and come back."