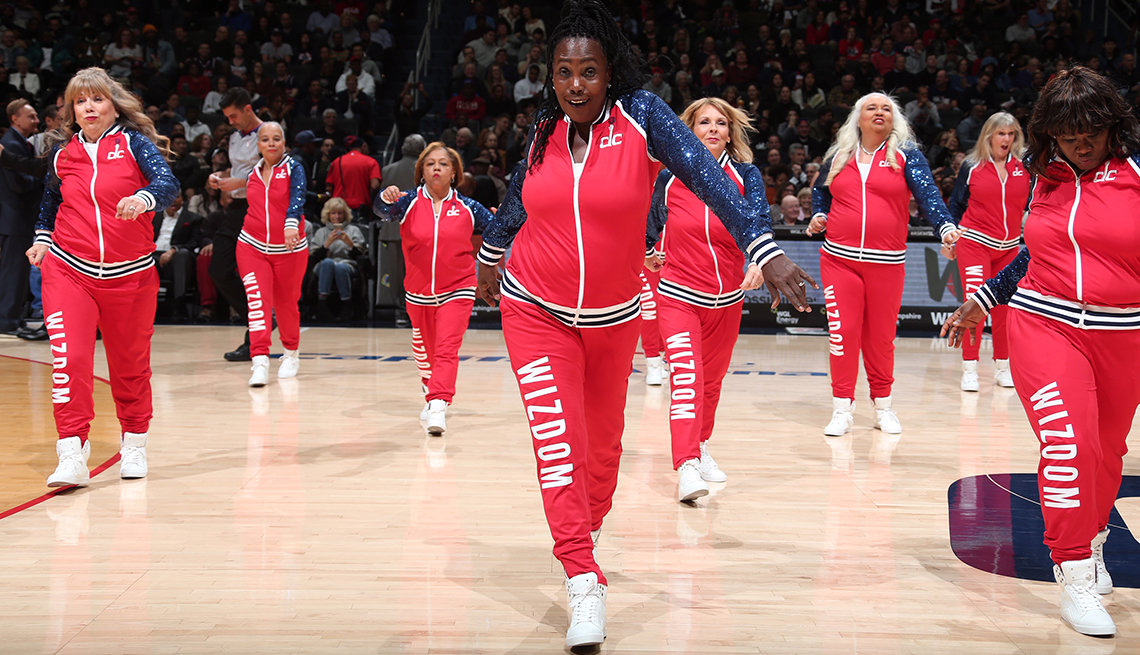 En español | On the court at halftime during a recent Washington Wizards home game, a group of dancers ages 50 to 76, all smiles and decked out in red jackets with sparkly blue sleeves, rocked their short-but-rollicking routine. The crowd cheered, watching the larger-than-life performance on the Jumbotron above the court.

They are Wizdom, a new troupe of older dancers sponsored by AARP who perform during the NBA team’s games about once a month. It’s a high-energy, entertaining performance.

“I think it inspires other older people,” says LaVeta, 55, after the December performance, her eyes still sparkling with glittery blue eye shadow (team policy is to refer to dancers by first names only). “I heard somebody say, ‘Man you guys really make me want to go to the gym.’”

The team was the brainchild of Wizards Dance Team choreographer Derric Whitfield, 36, who had coached the Space City Seniors dance team for the Houston Rockets — one of several NBA teams with 50-plus dance troupes, including the New Orleans Pelicans and the Golden State Warriors. The Space City Seniors were (and still are) a hit with fans, and Whitfield had long been eager to start a similar dance team for the Wizards.

AARP’s ‘Road to Wizdom’ series about the dance team will premiere on March 12.
Subscribe to AARP’s YouTube channel so you won’t miss an episode.

He finally got the green light last fall, and held an open casting call that drew around 55 women and one man from Washington, D.C., Maryland and Virginia. Now the team includes 19 women and that one man: Chris, a 53-year-old teacher. “That man can dance his behind off,” says Whitfield.

One dancer is a former Redskins cheerleader, another (LaVeta) once cheered for Washington’s NBA team when it was called the Bullets. There are lots of grandmas, a few cancer survivors, and plenty with chronic health conditions — though you’d never guess it from watching them on the court.

Lenora, 76, the eldest on the team who's known as “Nana,” has knee problems, and several years ago underwent brain surgery for hydrocephalus. “I started thinking, I can’t just lay around and have a pity party,” she says. When she heard about the auditions from her grandson, Marcel, who’s on the Wizards’ main dance team, she went for it and aced the auditions. “I love it,” she says.

Nana’s best buddy on Wizdom is Wanda, 65, a retired sign language interpreter with short gray hair and an easy smile. She may be the most enthusiastic dancer on the team, despite her fibromyalgia and plantar fasciitis, among other health issues. “I wake up in pain and go to bed in pain,” she says. “But for two to three hours [during practice] I am having the best time. It's a joy. You’ve got a bunch of old women twerking!”

They practice once a week — officially, but the dancers often get together at each other’s homes for extra practices. Though the performances are only a minute to 90 seconds long, they need to learn a new routine for each of the six or seven games they’ll appear at throughout the season.

The attention the team has received, including performing for local TV news and receiving a shout-out from Ellen DeGeneres on her national talk show, has been a blast, says LaVeta. “I now know what the Kardashians feel like.”