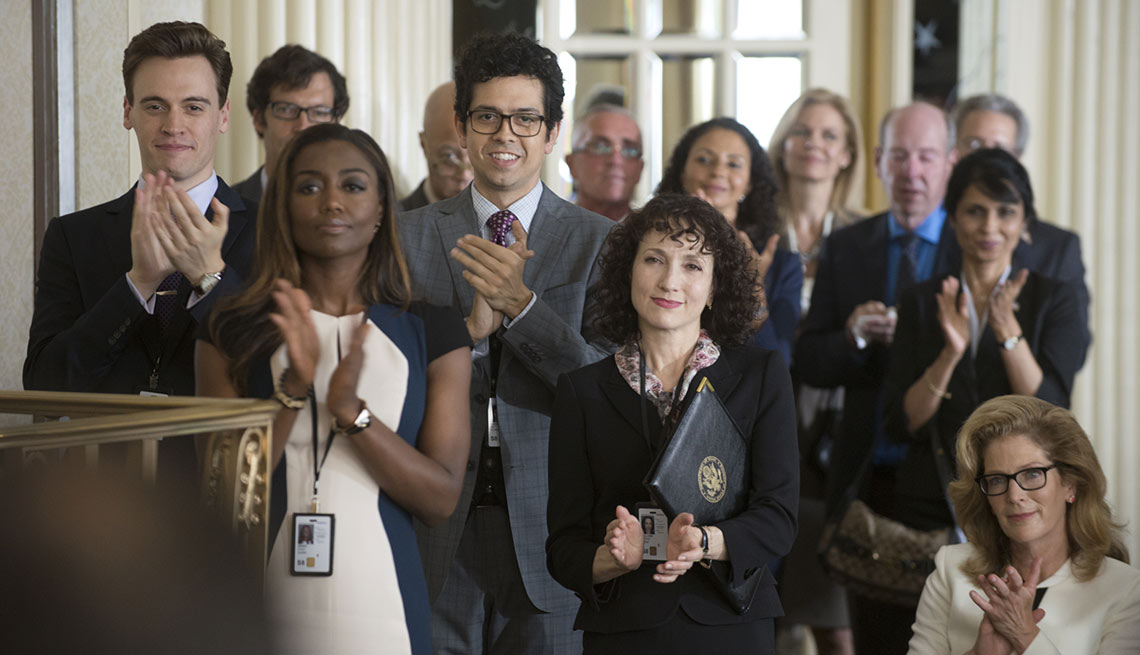 Bebe Neuwirth (fourth from the front left) stars as Chief of Staff Nadine Tolliver on the CBS series 'Madam Secretary.'

Bebe Neuwirth — who earned widespread recognition as uptight Lilith Sternin-Crane on Cheers and, more than a quarter century later, is still in front of the camera as Chief of Staff Nadine Tolliver on the CBS series Madam Secretary — is a woman who likes to act her age. When a boutique sales clerk recently handed her a dress to try on that was too revealing, "I told her, 'I can wear that. But just because I can doesn't mean I should,' " she recalls.

Neuwirth prefers to keep things real. "It's terrible to see women go to such lengths to try and look years—make that decades—younger. It's dangerous medically to do some of these [procedures], and what are we saying as a culture? If a woman doesn't have work done, people say, 'Isn't she brave?' or the opposite: 'Why doesn't she do something? She looks terrible.' Well, that's what this age looks like."

After decades of dancing on Broadway in musicals ranging from Sweet Charity and Chicago to Damn Yankees, Neuwirth, 56, had both hips replaced in her late 40s. To recover, she went for long walks around her Manhattan neighborhood. The stronger she got, the longer the walks. "I went as far as I could each time out, knowing that I'd have to walk that same distance home." She also returned to ballet class eight weeks after each replacement (one in 2006, the second in 2008), and still attends class as often as her TV shooting schedule allows. As for how the surgeries affected her ability to dance, she says in a Lilith-like deadpan: "I can't kick my face anymore."

She can and does, however, throw a mean pot. "I get deep pleasure from working with clay," she says. For Neuwirth, sitting at a potter's wheel is less a hobby and more a means of self-expression. "When I'm not working, my creative energy needs an outlet. I may work on a cabaret show with a music director or go to a pottery studio.